In September 1977, Star Wars was a huge hit in theaters, the Bee Gees were on the brink of releasing the Saturday Night Fever soundtrack, and the world was mourning the death of Elvis Presley. Meanwhile, Jupiter, Saturn, Uranus and Neptune had aligned themselves just right for the launch of NASA’s Voyager 1 spacecraft.

Now, 36 years and 12 billion miles later, Voyager 1 has left the solar system and entered interstellar space, NASA announced Thursday afternoon, nearly settling a yearlong debate. New data published in Thursday’s edition of the journal Science indicates that the spacecraft officially crossed from the heliosphere into interstellar space on or around August 25, 2012, making it the first manmade object to travel beyond our solar system.

So where exactly is Voyager, and what exactly is the heliosphere and interstellar space?

Voyager is now about 12 billion miles from Earth – that’s six times farther than the distance between Earth and Neptune’s orbit – and racing through space at 37,000 miles per hour, or 325 million miles per year.

“We’re well beyond the planets, but not all the comets,” said Ed Stone, the chief scientist on the Voyager Mission. “We’re outside the boundary of the sun. Not only is this an important goal in science, we are exploring where no one has gone before.”

The heliosphere is a bullet-shaped bubble surrounding the sun. As solar winds blast off the Sun’s surface at 1.79 million miles per hour, they shoot into space, filling the void with ionized gas — hot, highly-charged particles. (Scientists refer to this as helioplasma.) But those solar winds, scientists believe, slow down and eventually stop when they encounter interstellar space: a denser, cooler plasma made up of particles from the explosions of stars 15 million years ago. If each star has a heliosphere bubble around it, then interstellar space is what lies between those bubbles in our galaxy, Stone explained, a space beyond the influence of a star. And the boundary where the two the interstellar plasma and helioplasma meet is the heliopause, the threshold to interstellar space. 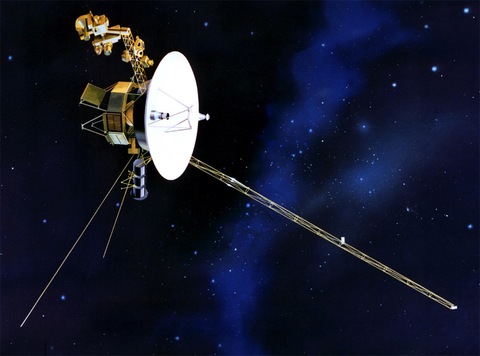 NASA’s Voyager spacecraft is now about 12 billion miles from Earth – that’s six times farther than the distance between Earth and Neptune’s orbit – and racing through space at 37,000 miles per hour. Image by NASA/JPL.

Mark Swisdak, a research scientist with the University of Maryland and lead author of a recent study in the Journal of Astrophysical Letters that used particle change and a theoretical model to interpret Voyager data, put it simply:

“The heliopause is a sharp boundary where you can draw a line and say our solar system ends here,” he said.

Scientists didn’t know where that boundary was until now. When the Voyager mission began in 1977, many scientists believed it was just beyond Jupiter, Stone said, about 365 million miles from Earth.

“We had no idea how big the bubble was,” Stone said. “The space program was only 20 years old at the time. [The Voyager mission] was going to be our chance to get out there and see what those cosmic rays were like,” he said.

But for at least two decades, Don Gurnett, principal investigator of Voyager’s plasma wave science instrument, believed the heliopause was much farther away — 11 to 16 billion miles from Earth. Interstellar plasma is a 100 times denser than helioplasma, Gurnett had theorized. Solar flares from the sun send ripples through the plasma, causing the particles to vibrate. Those vibrations are picked up as frequencies by two antennae on Voyager, which it translates into an audible tone. If the pitch were to go up, that would mean the density of the surrounding plasma had increased – an indication that the spacecraft had reached the outer edge of the solar system – the heliopause.

“It’s like a bell. The frequency is telling you the density of the plasma,” Stone said.

Voyager records those frequencies on a tape and beams these signals back to Earth as a radio emission. Every six months, the recordings play back to scientists on Earth. But for the past nine years, Voyager was quiet.

“It was kind of depressing,” he said. “We hadn’t detected plasma for nine years.”

Finally, the ripples from a burst of solar activity in April to May of 2012, which Gurnett called the St. Patrick’s Day flares, reached Voyager in April 2013. Gurnett heard a 2.6 kHz tone, much higher than the 300 Hz sounds they had heard before. He believed he was hearing the heliopause, right where he had predicted it years ago.

Scientists played audio of the frequency during a NASA press conference on the Thursday, which sounded like a shriek as it entered the heliopause.

Gurnett calculated backward to find the date when Voyager crossed over — August 25, 2012. Swisdak’s paper in The Astrophysical Journal Letters predicted that Voyager had arrived in interstellar space around July 27, 2012, based on the same particle data. But many scientists weren’t convinced, Swisdak said. The sound was not enough to convince all astrophysicists that Voyager had made it.

“The idea was when you went through this boundary, you should see a jump in the magnetic fields. They didn’t see a big jump,” he said. “This is still going to be percolated throughout the community. It could be possible that something odd is happening.”

Voyager 1 and Voyager 2 charge on, taking the first data of low-energy cosmic rays in interstellar space. They should send data back for 10 more years, provided they maintain power, Swisdak said. The next leg of Voyager’s journey will study how interstellar winds flow around our heliosphere.

“Now that we’re outside the solar neighborhood, we’re going to see what it looks like without the sun,” Swisdak said.

Astronomers, TV stars and members of the Voyager mission sent this message to the spacecraft: