Want to charge your phone while moving around? This Stanford lab can help

Wireless charging has been a dream of researchers for decades — Nikola Tesla to Tesla Motors. Now, scientists at Stanford University say you may be able to charge your smartphone on the run in the not-too-distant future.

The engineers have developed a way to transfer power via a magnetic field into a LED light bulb as it moves up to 3.5 feet away. This feat may seem minor, but this proof of principle may usher in wireless charging for everything from smartphones to electric cars.

Here’s how it works. Remember electromagnets? Those devices you experimented with in your high school physics class. When electricity is run through a metal coil, it creates a magnetic field. The larger the coil and the more power coursing through it; the bigger the field.

To transmit power wirelessly, the team set up two 23-inch wide electromagnetic coils close to each other. When one coil powers up, its magnetic field extends to cover the other coil, moving electrons — electricity — through the pair. The LED is wired into the second coil, so when the pair is electrified, the light shines. A similar principle is used to take medical pictures with magnetic resonance imaging (MRI) machines.

“[This concept] initially was developed in quantum mechanics,” said Stanford electrical engineer Shanhui Fan, who co-authored the study published in Nature on Wednesday. “They were originally referring to transmission of light, but we’ve seen there’s a very interesting application of physics concepts in wireless power transfer.”

An LED bulb (bottom) lights up as wireless energy flows between two electromagnetic coils. The power transfer continues as one coil slides from the other.

Wireless power has been tried in the past. The Qi system, on the market since 2008, allows for smartphone charging through a thin mat — but only if the phone remains in constant contact with the mat’s surface. Apple is reportedly working on a non-magnetic, wireless charging system for the next iPhone. Experimentally, scientists have delivered power via a magnetic field over a few feet, but any movement makes the system glitch out. Those prior attempts needed the electromagnets to be completely stationary in order to stay in sync, and that’s what makes Fan’s experiment different.

“What we have discovered is a scheme that allows one to [transmit power wirelessly] in a robust fashion,” Fan told NewsHour. “The high efficiency can be maintained over a range of transfer distances without the need for any active tuning of the circuits.”

Active tuning refers to a person continuously synchronizing the magnetic fields while electricity runs through them — a prospect that’s less than ideal for consumers who balk at the idea of someone from the power company being in their houses at all times. By using a special computerized amplifier, the electrified source coil in Fan’s design is always in sync with the destination coil. No technician required.

You don’t need to worry about these electromagnets frying your other devices. Prior research conducted by MIT scientists established standards for using magnetic fields to charge devices over short distances. WiTricity, a company based just outside of Boston, is one firm working on such devices. WiTricity stated, in general, there is no need to worry about wireless power generated by magnetic fields. Because the fields generated by the coils are low frequency — as opposed to the more energetic fields found in scary things like electromagnetic pulses from nuclear detonations — your other devices are safe from being fried. 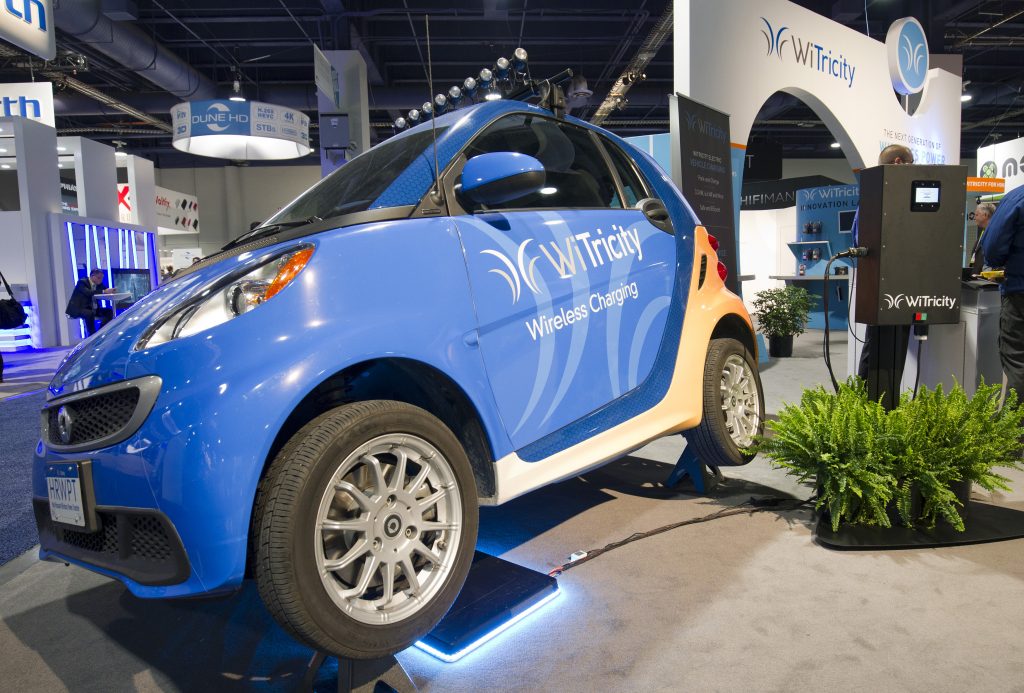 It will likely be at least a decade before Fan’s system is ready for your home. Right now, the large coils transfer 10.5 volts, enough to power a small radio. But Fan argued his method may one day be suitable for cell phones and other devices on the move.

“A more speculative idea is to use it to charge an electric vehicle while it is moving,” Fan said.

“It will essentially eliminate the range anxiety associated with electric vehicles,” Fan said. “There are a lot of challenges that still need to be overcome, but what we have done here is an important step forward.”