Skip 39 light-years across our galaxy, and you’ll arrive at Trappist-1, an ultracool dwarf star with a band of special followers. This dim star hosts seven Earth-like planets within its habitable zone, according to a study published today in the journal Nature. Exoplanets are a dime a dozen these days, but due to unique properties in this exosolar system, the new discovery may usher in a movement in the hunt for habitable worlds — one where astrophysicists can ascertain the presence of life without traveling across the cosmos.

“It’s the first time so many Earth-type planets [have been found] formed in the habitable zone of a star,” Michaël Gillon, an astrophysicist at Université de Liège in Belgium and study co-author, said during a press briefing Tuesday.

By “habitable,” Gillon means the exoplanets exist in a temperature zone that’s conducive for liquid water even though these Earth sisters orbit relatively close to a dwarf star. If magically transplanted, all seven Earth sisters would land within the distance between Venus and our Sun. The closest sister is 1.02 million miles from Trappist-1 — a third of the distance separating Mercury from our blazing star.

Yet every planet in this hepta-Earth system may support liquid water, due to the star’s ultracool, low-radiation dwarf status. Trappist-1 is also approximately a tenth the size and mass of our sun. Researchers plan to capitalize on this star’s diminutive nature to discover if these planets are habitable.

“We will be able to study the climates and chemical composition of the atmospheres,” Cambridge University astronomer and study co-author Amaury Triaud said Tuesday during a press briefing. “Within a few years, we’ll know a lot more about these planets, and with hope, if there is life there maybe within a decade.”

Whoa! That’s a huge claim. Here’s why Triaud can make it, even though they haven’t found signs of life yet. 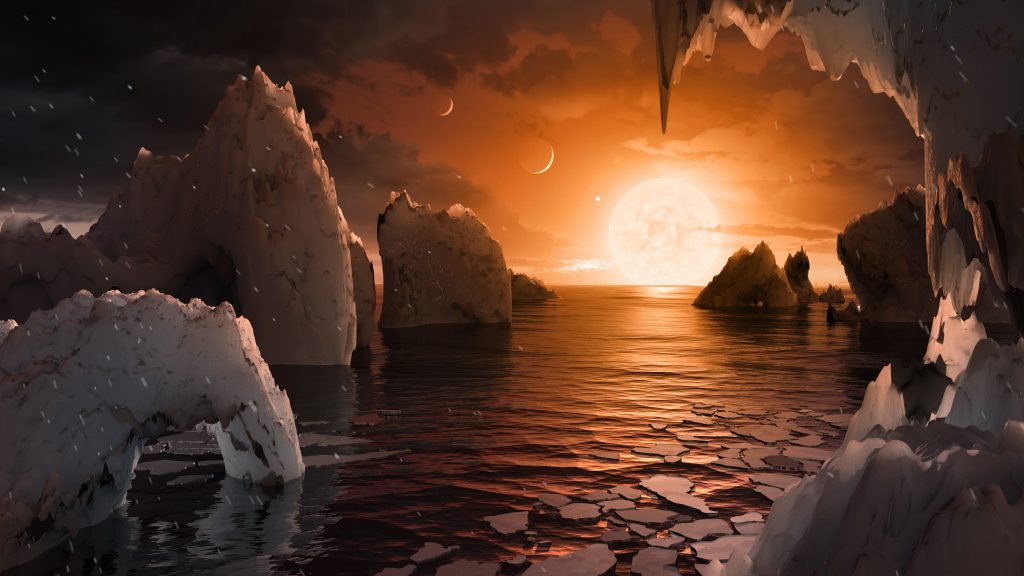 Imagine standing on the surface of the exoplanet TRAPPIST-1f. This artist’s concept is one interpretation of what it could look like. Photo by NASA/JPL-Caltech

Six years ago, he and his colleagues embarked on a search for exoplanets that orbit dwarf stars like Trappist-1. To find exoplanets, astronomers often rely on the transit method, where the planet passes in front of its star and casts a “shadow” on our Earth-based telescopes.

Exoplanets orbiting dwarf stars make for easier targets because the planets block a large fraction of the stellar light. So when Earthlike planets cross stars the size of Trappist-1, they cast a much larger shadow relative to what might happen with a star the size of our sun. This shadow delivers a bevy of information about the planet, such as its mass, size and even its atmospheric composition.

“If you have the size and mass, you can get the density of the planet. So you can know if it’s a rocky planet, or a giant [gas] planet or if it’s something in between that’s rich in ices,” Emmanuël Jehin, study co-author and Université de Liège astrophysicist said.

Last May, this research group revealed the presence of three rocky, Earth-like exoplanets in the habitable zone around Trappist-1 — an area where the temperature might permit liquid water. Their analysis was based on observations at the ground-based, Belgium-operated Trappist telescope in the Chilean mountains, but immediate follow-up observations found a weird hiccup. The third planet from the dwarf star had inconsistent transits — six possible orbital paths around Trappist-1.

So, the researchers booked time at a flurry of ground-based telescopes around the world — from the UK InfraRed Telescope (UKIRT) in Hawaii to the South African Astronomical Observatory — plus a 20-day stint with NASA’s Spitzer Space Telescope in mid-September. The space telescope was crucial because it provided uninterrupted observations of the Trappist-1 system, whereas the ground-based telescopes can only observe at night.

By pairing 34 transits recorded by the space telescope with more than 900 hours of ground-based observations, the team resolved the masses and sizes for the seven Earth-like exoplanets, dubbed “Trappist 1b” through “Trappist-1h.” The exoplanets maintain near-resonant orbits, meaning the sisters travel around Trappist-1 in periodic fashions that are proportional to each other.

“This is the most exciting result I have seen in the 14 years of Spitzer operations,” Sean Carey, manager of NASA’s Spitzer Science Center at Caltech/IPAC in Pasadena, California, said at a press conference on Wednesday. “Spitzer will follow up in the fall to further refine our understanding of these planets so that the James Webb Space Telescope can follow up. More observations of the system are sure to reveal more secrets.”

NASA announces discovery of exosolar system that hosts seven Earth-like exoplanets within the habitable zone of an ultracool dwarf star. Check out the NASA app about the discovery.

“In the same time that the innermost planet makes eight orbits, the second, third and fourth planets revolve five, three and two times around the star, respectively,” Leiden University astrophysicist Ignas Snellen wrote in an op-ed critique of the study. This quirk mirrors the orbital conditions for Jupiter’s moons — Io, Europa, Ganymede and Callisto — and suggests the exoplanets formed far from Trappist-1 before migrating closer to the star.

Snellen estimates for every transiting planet found, there should be 20 to 100 likewise systems that we can’t see because the exoplanet fail to transit between their star and Earth.

“In the past few years, evidence has been mounting that Earth-sized planets are abundant in the Galaxy,” Snellen wrote. “But Gillon and collaborators’ findings indicate that these planets are even more common than previously thought.”

A dwarf-sized hunt for life 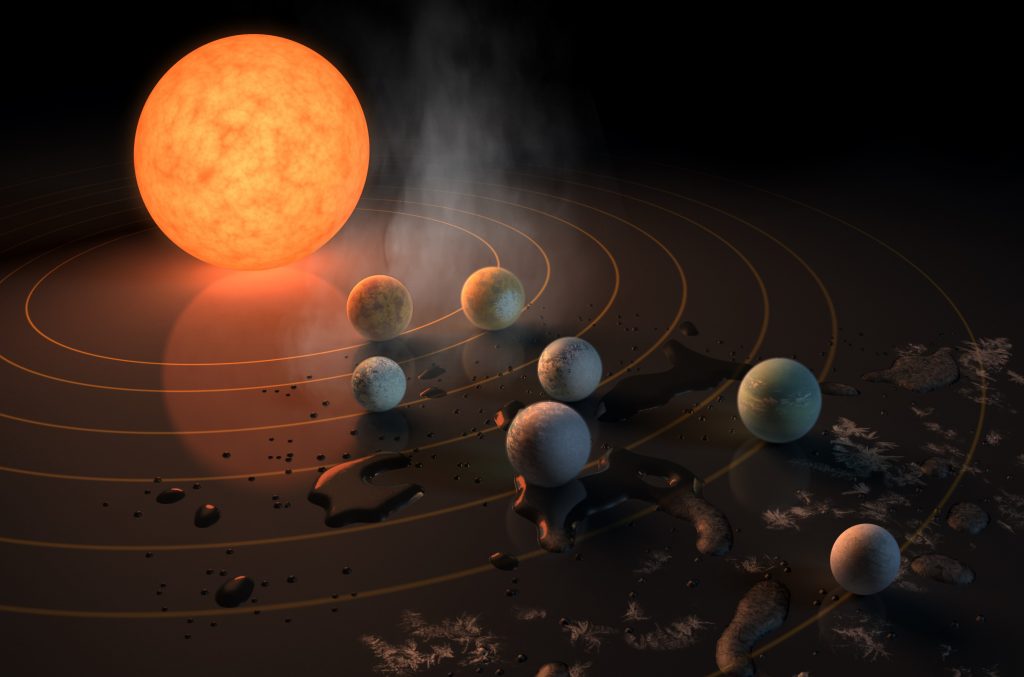 The TRAPPIST-1 star, an ultra-cool dwarf, has seven Earth-size planets orbiting it. Photo by NASA/JPL-Caltech

Dwarf stars offer a fresh take on exoplanet hunting, but does the Trappist-1 system harbor habitable planets? Young dwarf stars emit a lot of X-ray and ultraviolet radiation that could erode an atmosphere, Gillon said, which doesn’t bode well for sustaining life.

But Trappist-1 is half a billion years old, so its turbulent days might be done.

“Compared to red dwarfs like proxima centauri, [Trappist-1] is a very quiet star. It has had some flares, but they’re not very strong and quite rare,” Gillon said.

Proxima centauri, our sun’s nearest neighbor, is an interesting comparison. Researchers recently confirmed a potentially habitable world exists there, but the star’s tumultuous youth may have baked the planet, creating a state of Venus-like runaway greenhouse gases.

Other features could dictate the planets’ propensity for life. The hepta-Earths are very close to the star, so the researchers expect that the gravitational forces — much like for Jupiter and its moon — result in tidal locking, Gillon said. These tidal tugs can force each planet to always face the star with the same hemisphere — and potentially create a hostile environment.

For instance, Jupiter’s moon Io is covered with volcanoes due to tidal heating caused by its parent planet and the other nearby moons. Gillon suspects this condition may apply to Trappist-1’s two innermost planets. 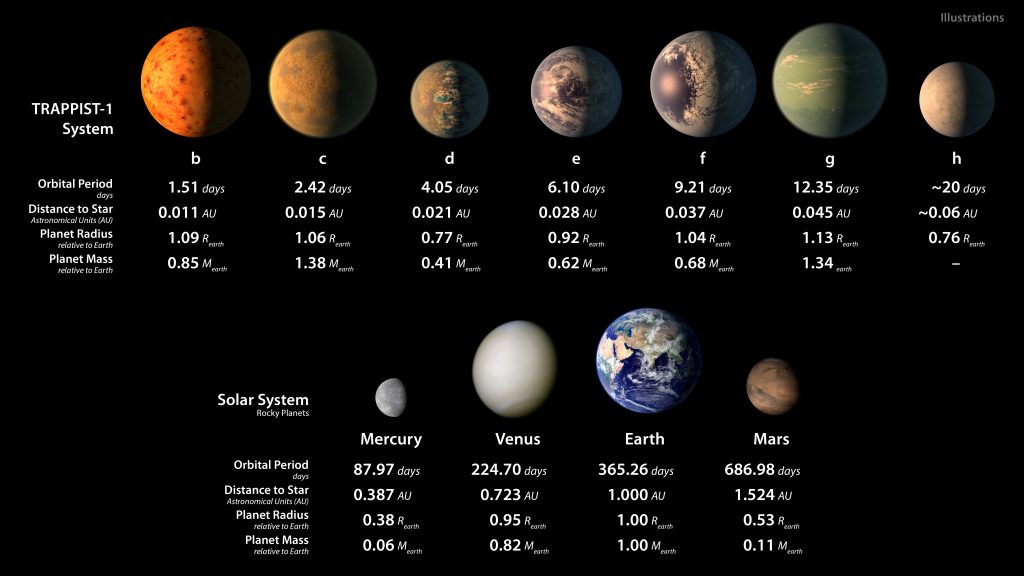 his chart shows, on the top row, artist conceptions of the seven planets of TRAPPIST-1 with their orbital periods, distances from their star, radii and masses as compared to those of Earth. The bottom row shows data about Mercury, Venus, Earth and Mars. Photo by NASA/JPL-Caltech

Meanwhile, Triaud argues the fifth planet from the dwarf star — Trappist-1f — may have escaped these inhospitable conditions and is likely the most interesting candidate for a search for signs of life.

“[TRAPPIST-1f] is a bit cooler than the Earth, but with the right atmosphere and enough greenhouse gases. The temperature should be fine,” Triaud said. And because Trappist-1 burns so dim, he and his colleagues can use Earth-based telescopes or space telescopes like Hubble or James Webb to scan for atmospheric signs of life. Oxygen wouldn’t be enough to confirm life, rather the team would need to detect a precise set of gases linked to what living creatures exude here on Earth. A star as a bright as the sun would mask these light-based measurements.

The Belgian team plans to hunt for these clues as part of the SPECULOOS project, a mission to detect terrestrial planets around the smallest and coolest stars in our celestial backyard. (Fun Fact: Trappist is the name of a Belgian beer and SPECULOOS gets its name from a Belgian cookie.) The team has already started studying the atmospheres of the two innermost planets, so they can rule out if the planets have atmospheres like ours or like the large hydrogen envelopes around Neptune.

Snellen stated the team had plenty of time to look:

“In a few billion years, when the Sun has run out of fuel and the Solar System has ceased to exist, Trappist-1 will still be only an infant star,” Snellen wrote. “It burns hydrogen so slowly that it will live for another 10 trillion years — more than 700 times longer than the Universe has existed so far, which is arguably enough time for life to evolve.”

Left: This artist's conception shows what the TRAPPIST-1 planetary system may look like, based on available data about their diameters, masses and distances from the host star. All the exoplanets in this system exist in the so-called habitable zone and are Earthlike in size and mass.Photo by NASA/JPL-Caltech