Ken Jennings and Brad Rutter — the least-likely Jeopardy! underdogs ever — found themselves no match Wednesday night for Watson — IBM’s Frankenstein of trivia.

I haven’t watched Jeopardy in more than a decade, but in what may be a high-water moment for the quiz show in terms of audience, I was likely joined by millions of others rooting for the best that humanity could put forward. 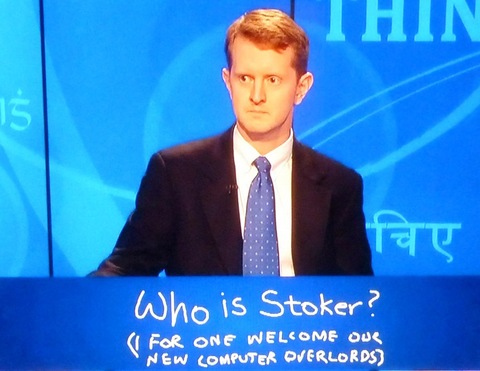 Below his Final Jeopardy! answer about novelist Bram Stoker, Ken Jennings scribbled out a meme which seems a perfect blend of wit and doom. It was a mix of his eloquent nerdiness and his humble recognition in that he represented what may be the finger in the dike, trying to stop the inevitable superiority of artificial intelligence.

He and fellow uber-champion Brad Rutter were handed the most significant defeats either had ever experienced on the show, but hopefully they take some consolation from the fact that they lost to the best there ever has been.

Miles Obrien went behind the scenes of Watson for a recent edition of the Newshour.


He even had an opportunity to play the machine, you can watch the entire showdown, and perhaps spot any exploitable weaknesses in our future overlord’s armor.


He and I spoke about the adventure after the match.


Perhaps Jennings and Rutter (and Miles) can now start an elite support group with chess legend Garry Kasparov, who lost to another IBM computer.