The Internet offers access to an elephant’s trumpet, a tiger’s roar and a rhino’s grumbling squeal, and now it is helping to save these animals from a treacherous network of illegal poachers and traders.

Researchers at the University of Pennsylvania used data from around the world to identify the key perpetrators in wildlife trafficking. They found that illegal poaching in just six countries could account for 89 to 98 percent of the global trade of elephants, tigers and rhinos. By tracking these networks, the scientists spot the countries that need stronger public awareness and law enforcement against illegal trafficking.

The study relied on HealthMap: Wildlife Trade, an online repository where conservation organizations and local news sites report the illegal trafficking of animals. Researchers analyzed the illegal shipments of 232 elephants, 165 rhinos and 108 tigers that happened from August 2010 to December 2013.

Nikkita Patel, the project’s manager, got the idea from other areas of research that have used online resources to find the best routes to uncover terrorist networks and trace drug trafficking. 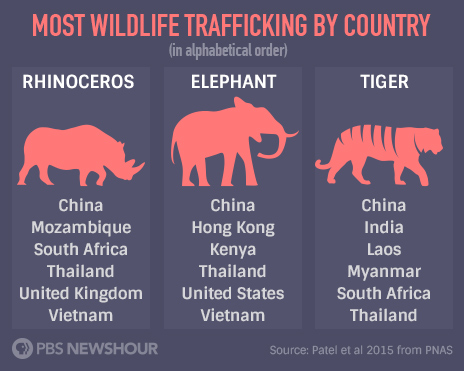 Countries serving as exporters, importers or intermediaries vary for each animal, according to the June 15 report in the Proceedings of the National Academy of Sciences. Poachers take indirect routes to sneak past security checkpoints, increasing the number of countries involved in trafficking. China plays the biggest role in the trafficking for all three animals.

Patel laments this may be due to the high demand for wildlife products – such as ivory – in Asian cultures. The United States also made the list as a dominant player for elephant trafficking, suggesting a need for tighter regulation on ivory trade at American shores.

Culture drives a lot of the demand for wildlife products. Tigers get turned into rugs or wine in Guilin, China. Elephants throughout Africa are slaughtered to make ivory jewelry, and South African rhinos are butchered for their mythical ‘cancer curing’ horns.

“Some people don’t realize the animal has to be killed for ivory to be extracted and that they are causing harm to elephants. They may think the tusks just fall out,” Patel said. “More education about what is actually happening and the backstory of these animals would decrease these demands [for illegal products].”

Current attempts to disrupt wildlife trafficking include security checkpoints with sniffer dogs and educational campaigns. China and many other countries sponsor ivory crushing demonstrations to raise awareness of the issue. For instance, the US Fish and Wildlife Service will crush one ton of ivory in Time Square on June 19. Patel’s research provides a tool to help pinpoint where enforcement and education are most needed. But she also feels confident that future technology will fortify checkpoints and monitor populations of endangered species. Drones are already scanning fields for poachers and keeping tabs on the numbers of endangered black footed ferret in Montana.

“If trafficking continues at this rate we aren’t going to have wildlife for future generations,” Patel said.

Left: A collection of confiscated cat rugs held by the U.S. Fish and Wildlife Service at their repository in Commerce City, Colorado. Photo by Rick Wilking/Reuters