The World Wide Web is growing up. It turns 25 on March 12 — if you use the date Sir Tim Berners-Lee wrote a paper proposing the system as the birthday of the Web.

The Web is now woven in our everyday lives. We use it for everything, from looking up directions to chatting with friends and family thousands of miles of away. Can you even remember the last time you went a day without the Web?

Back in 1995, only 14 percent of American adults used the internet. Today it’s 87 percent, according to the Pew Research Center, and among young adults aged 18 to 29 it’s 97 percent.

Pew Research Center’s Internet Project in partnership with Elon University’s Imagining the Internet Project is marking the internet’s birthday this year with a series of reports on internet penetration, privacy, cyber security, the “internet of things” and net neutrality.

The first report, released this morning, uses Pew’s extensive research on technology in American life, which dates back to 1990 when Pew first asked a question about computer use in a national survey. The report also includes telephone interviews conducted in January of 2014 to look at internet penetration and how Americans feel about the internet. Those interviews surveyed 1,006 adults living in the continental United States, including 502 with landline phones and 504 cell phones, 288 of which didn’t have a landline phone.

Those telephone interviews show that Americans generally feel the internet has made a positive impact on their lives and personal relationships.

“After they tote up all the positives and negatives of life in the digital age, the vast majority of users believe these technologies have made things better for them and for society,” Lee Rainie, director of the Pew Research Center Internet Project said. “They see problems, to be sure, but most have now brought technology so deeply into the rhythms of their lives that they say it would be very hard to give up.” 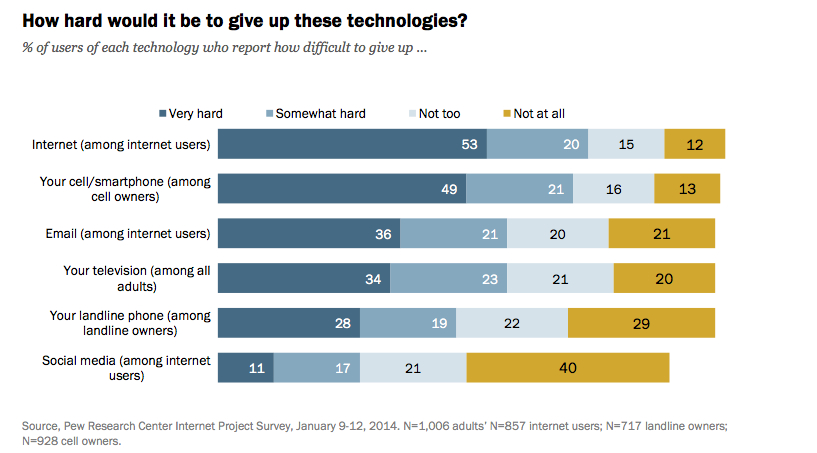 Here are some of the key findings of the survey:

The internet is ingrained into American life

The internet is good

The internet is essential

The internet has strengthened relationships

“Looking back at the origins of the Web, we can see patterns of use and non-use that persist today,”  Susannah Fox, co-author of the Pew Research Center report said. “A person’s level of education is still a primary factor in predicting whether she uses technology or not. And the younger someone is, the more likely it is that she uses technology. One constant is that users, whenever they start, say that digital communications tools strengthen their relationships.”

Do you feel the same way about the internet?

Left: On this NeXT computer, British scientist Tim Berners-Lee devised the basic principles of the World Wide Web, while working at CERN in the late 1980s and early 1990s.