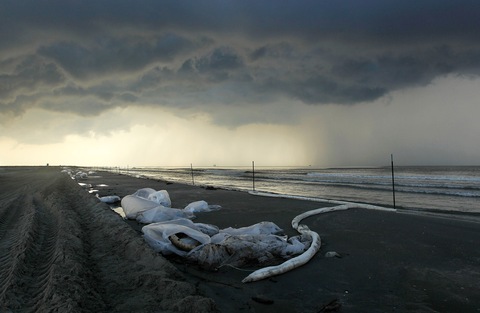 If all goes according to plan, BP on Wednesday will attempt to plug the leak that has been gushing oil into the Gulf of Mexico for more than a month by pumping as much as 50,000 barrels of mud into a blown-out well one mile below the surface.

BP was still running tests Wednesday morning to decide whether to move ahead with the so-called top kill, BP CEO Tony Hayward told NBC. Company officials are giving the technique between a 60 percent to 70 percent chance of success and warn that the method has never been attempted at such a deep depth.

The Times-Picayune breaks down how the process works:

“The top kill process involves using a 30,000-hydraulic-horsepower engine to pump fabricated ‘kill mud,’ which is about twice the density of water, into the well at 40 to 50 barrels a minute to overcome the flow of oil. The material will be pumped from a vessel on the surface down a 6 5/8-inch drill pipe and into a set of 3-inch hoses attached to the choke and kill lines of the blowout preventer, which failed to seal the well after the rig exploded. If all goes well, the mud will push the oil back into the reservoir.”

It will take between half-a-day and two days before engineers can determine whether the top kill was successful. If the effort fails, BP has “laid out on the seabed a series of equipment and materials to be able to move in by the weekend another containment dome over the top of the well,” Robert Dudley, the company’s executive vice president in charge of operations in Asia and the Americas, told the NewsHour on Tuesday.

BP has said that in the worst-case scenario, the company will be able to cap the leaking well sometime in August. Yet ultimately, Dudley said, “I believe … we will have that well capped before August.”

We’ll be keeping an eye on Wednesday’s activities in the Gulf here on the Rundown, on this evening’s program and with our live “Spillcam” widget:

We’re also curious to hear your ideas on how to stop the leak. You can post a text or video response by visiting our Google Moderator series here.

Secretary of State Hillary Clinton called on the international community Wednesday to take action against North Korea in response to the alleged torpedo attack in March that killed 46 South Korean sailors.

“This was an unacceptable provocation by North Korea and the international community has a responsibility and a duty to respond,” Clinton said from South Korea following a meeting with President Lee Myung-bak.

Clinton said the United States would support South Korea as it presses the United Nations Security Council for a “strong but measured response.”

Israel launched a pair of overnight air strikes in the Gaza Strip, targeting tunnels in the south of Gaza near the border with Egypt. No deaths were reported, though 22 people were injured in the attack, which came just one day after militants fired mortars into Israel from Gaza.