Its ash spewed 15 miles into the sky, reaching the stratosphere, and littered across 579,000 square miles of the sea of Japan. It was the second largest volcanic blast that humans ever witnessed, and the molten rock ejected during this event — known as the “millennium eruption” — could have blanketed the entire state of Connecticut in a 5-foot-tall pile of hot goop.

Now, thanks to one of the first collaborations between Western and North Korean scientists, the world has a new glimpse into the underbelly of Mount Paektu, exposing where this molten rock — magma — originated. Mount Paektu resides on China-North Korea border, where until now, geopolitical strife has blocked such studies from happening. The findings, published today in Science Advances, may explain what triggered the millennium blast, while also foretelling the likelihood of a similar eruption in the future.

“The project started in 2011, when North Korean scientists put a call out for an international collaboration through an NGO, the Environmental Education Media Project,” volcanologist and study co-author James Hammond of Imperial College London told NewsHour.

A year earlier, the Eyjafjallajökull volcano eruption in Iceland grounded airplanes across Europe, creating a $5 billion drain on the global economy. In a recent op-ed for Science and Policy, Hammond explains how the incident sounded alarm bells for geologists across the world because it highlighted humanity’s intimate contact with volcanoes. 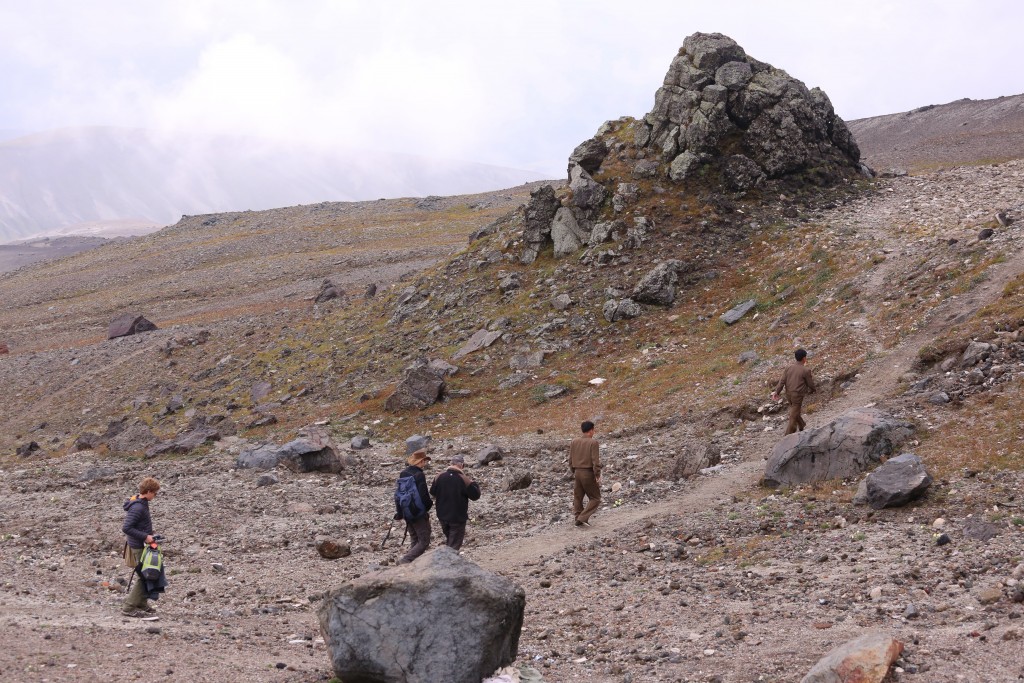 In the field on Mount Paektu. Photo by Kosima Weber Liu

Population increases and globalization have pushed communities into closer proximity of volcanoes. Many of these volcanoes remain understudied, due to their remoteness, lack of resources but also politics. Hammond estimates that 193 volcanoes reside within countries with international sanctions.

So given rumblings near Mount Paektu between 2002 and 2005, Hammond and his colleague Clive Oppenheimer of the University of Cambridge decided to answer the call from North Korea. They met with policy experts at the American Association for the Advancement of Science and the Royal Society in the U.K. to communicate their scientific needs to government officials. The deliberations took two years.

“We didn’t really get any pushback from the UK or U.S. government, per se, but we did have long discussions about what we could and couldn’t take in terms of international sanctions,” Hammond said.

So the team devised a workaround with seismic detectors, which they deployed at six stations in North Korea for longer times than usual. Distant earthquakes cause seismic waves to course through the ground, and so the team measured how these energy waves interact with the Earth under Mount Paektu, to get a sense of volcanic crust and the rock composition. 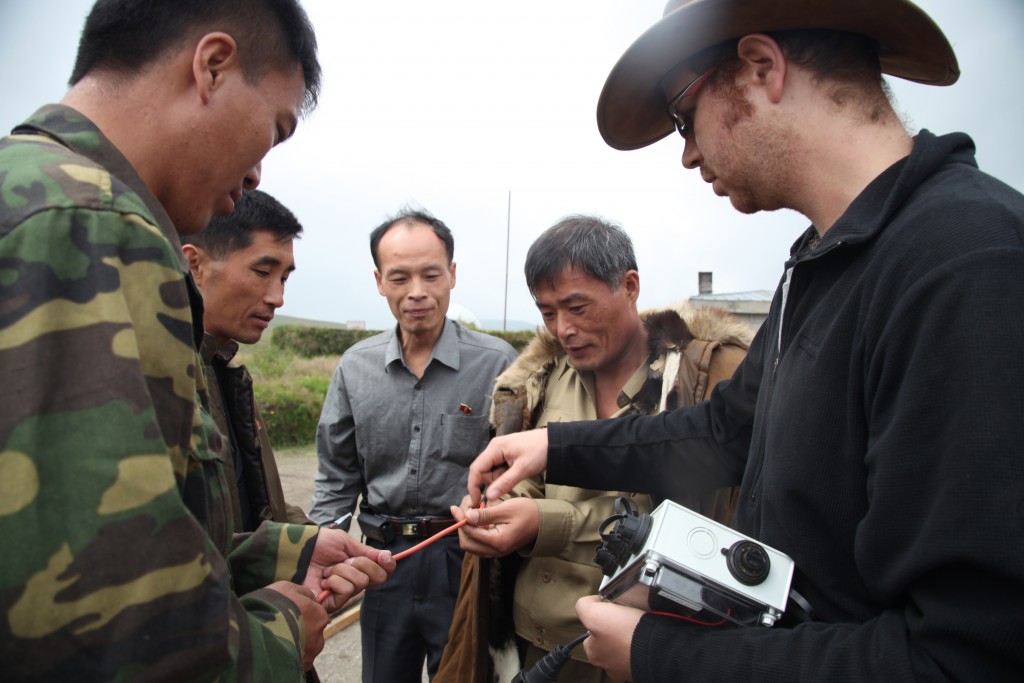 “Culturally, it was a very different place, but it was great working with the scientists,” Hammond said. “They’re clearly very driven by working on Mount Paektu. They’ve been working there for many years, decades even.”

Once the data were collected, four Korean scientists traveled to the U.K., and together, the teams spent months processing the results. They found that fluid molten rock is still buried under a significant portion of the volcano’s crust.

“Understanding the location and quantity of magma beneath an active volcano is an important first step to understanding what kind of eruption that volcano may produce,” Kayla Iacovino, a former graduate student of Oppenheimer and current scientist at the U.S. Geological Survey, told NewsHour via email. This magma also confirms the volcanic activity — like hot springs — that is seen at the surface, she said.

The total size of this magma pot remains unknown, but it was possibly responsible for 946 A.D. eruption and the recent rumblings, Hammond said. 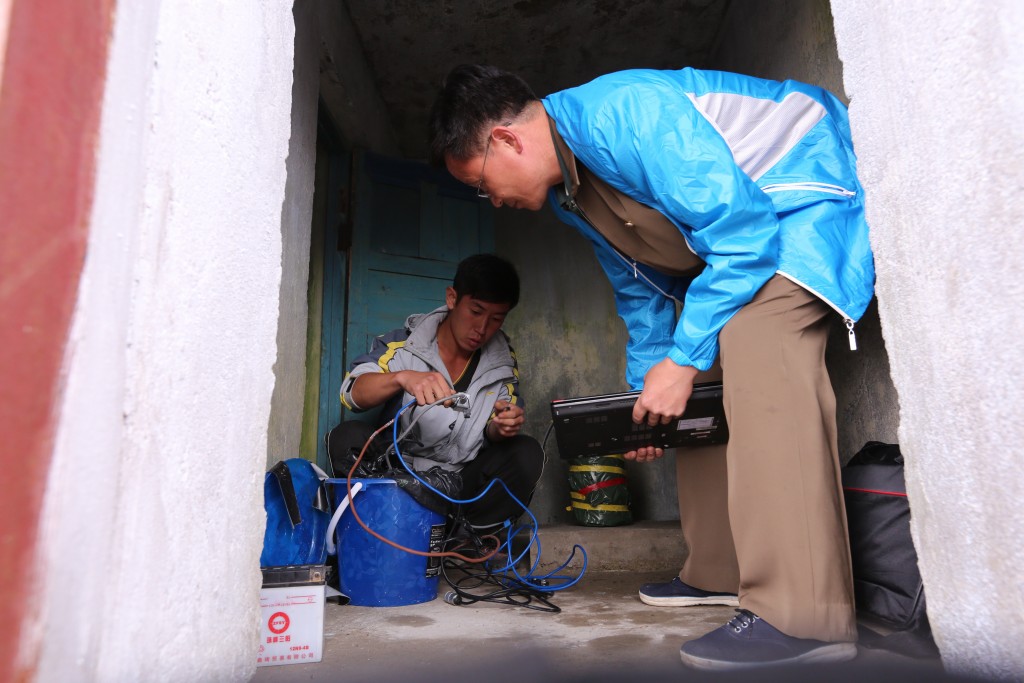 Chinese and Korean geologists are continuously looking for seismic changes that might signal an oncoming eruption. The presence of magma gives a clearer picture of the risk to humans. The immediate area is sparsely populated, but 1.6 million people live within 62 miles of the volcano.

The analysis from the early expeditions remains ongoing. For instance, Oppenheimer and Iacovino are examining rocks that erupted from the millennium event, in order to clarify the volcano’s history.

“That’s important because if we know what a volcano did in the past, then it might allow us to understand what kind of eruptions might happen in the future,” Hammond said.