What Happens To China if the U.S. Defaults on Its Debt? 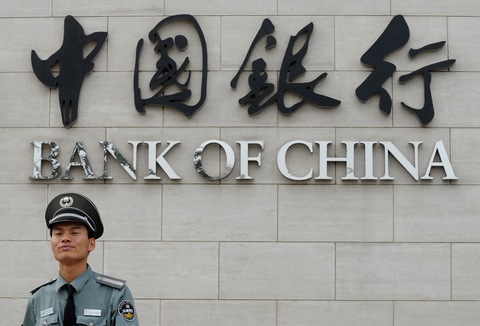 A security guard patrols outside the headquarters of the Bank of China in the Xidan shopping area of Beijing. Photo by Mark Ralston/AFP/Getty Images.

Question: What would happen to China if the U.S. went into default, given it holds so much U.S. debt?

Paul Solman: If we went into default, China would have to accept less money on its loans to the U.S. — i.e., the U.S. Treasuries it holds. If we repudiated— that is to say, renounced our debts, as China itself did after Mao took over — China would own nothing but a lot of worthless U.S. IOUs, as the holders of Chinese debt did after 1949. I have a Chinese bond given to me once as a gift. It entitles me to precisely nothing in China.

But global investors don’t seem to quaking at the prospect of U.S. default at the moment. While even some very respectable commentators have equated America with Greece, just at the moment, Greek 10-year bonds pay, in effect, a 29 percent interest rate. The U.S., to borrow money for 10 years, is paying less than 2 percent. Two percent for a decade. Doesn’t seem as if the world is much worried about U.S. default, but deflation instead.

Editor’s note: For more on China, see out ‘Standup Economist in China’ series with Yoram Bauman, who sends us occasional video updates while on a five-month climate economics research stint in Beijing: