What is a blazar? Its high-energy flares could unlock the foundations of the universe

When a galaxy gets pulled into the supermassive black hole at its center — yes, that happens — it can create a blazar — an intense beam of high-energy radiation.

There are thousands of blazars across the universe, but on Thursday, a team of physicists, working with a lab near the South Pole, said they’ve discovered that blazars can also double as particle accelerators.

They report, in two papers published in the journal Science, that blazars are a source of high-energy neutrinos — elementary particles of the universe that could help trace the origin of cosmic rays.

The universe is full of neutrinos, but we barely know that they are there. Trillions of these elusive particles pass through your body every second, stopped only by a head-on collision with other particles, like the nucleus of an atom. In 1998, researchers discovered that neutrinos have mass, upending what was thought about how these ghost particles and possibly breaking the Standard Model of physics.

This latest discovery is important because, after the sun and supernovas, blazars are only the third known source of neutrinos, and learning about them could help with a number of missions, from understanding the foundations of the universe to detecting illegal nuclear weapon development.

What the scientists did:

Neutrinos are hard to detect. Over the course of seven years, a team of researchers built the IceCube Neutrino Observatory, a cube of Antarctic ice more than half a mile on each side, with the goal of spotting rare high-energy neutrinos. 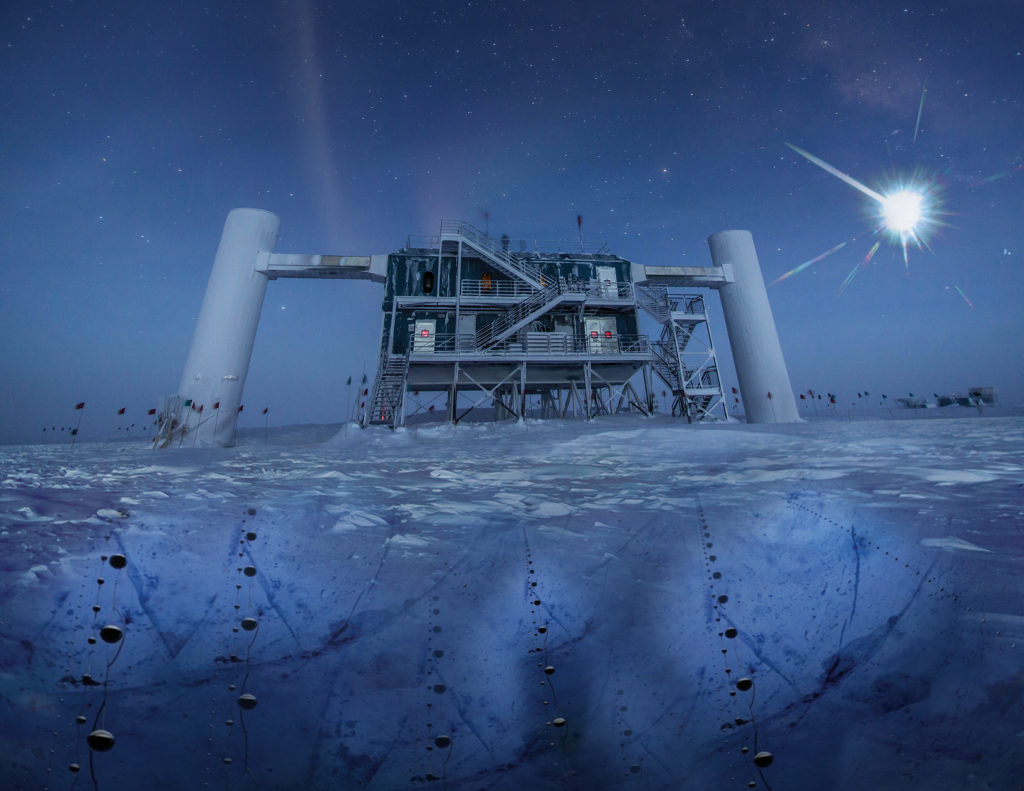 In this artistic composition, based on a real image of the IceCube Lab at the South Pole, a distant source emits neutrinos that are detected below the ice by IceCube sensors, called DOMs. Image by IceCube/NSF

The project includes 300 scientists in 12 countries across four continents. More than 5,000 detectors are buried deep in the ice — some more than a mile down. The holes for the detectors were “drilled” into the ice with hot water. Once the detectors reached the appropriate depth, the water froze them in place.

Here’s how it works: When a neutrino hits an atom’s nucleus within the ice, it starts a chain reaction that eventually creates a cone of blue light. 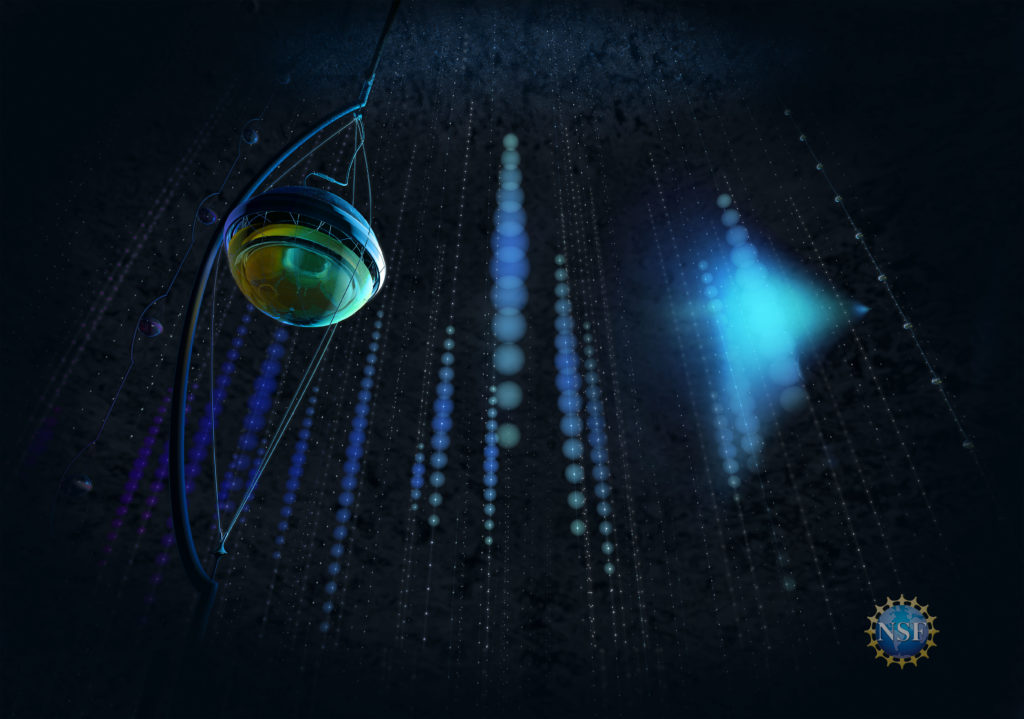 When a neutrino interacts in the clear Antarctic ice, it produces secondary particles that leave a trace of blue light as they travel through NSF’s IceCube detector. Image by Nicolle R. Fuller/NSF/IceCube

When this light hits the detectors around it, an electrical signal is sent from the detector to a computer at the surface. Scientists convert these “snapshots” of the neutrinos into a 3D movie that shows exactly where the energetic particle passed through IceCube. Even at this advanced observatory, spotting neutrinos is rare. But when celestial objects “flare,” they spit out many more neutrinos than usual, and the chances go up.

What the scientists found:

Last fall, one neutrino set off a different kind of chain reaction. Within a minute of the neutrino’s detection, IceCube notified more than 20 observatories across the world, which then subsequently pointed their telescopes in the direction of the neutrino’s origin. 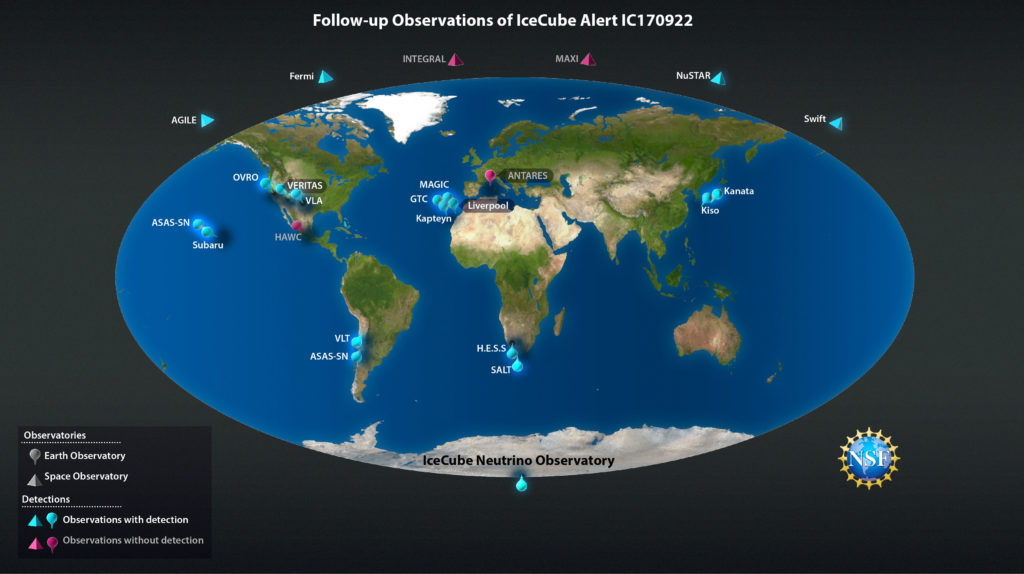 On Sept. 22, 2017, NSF’s IceCube Neutrino Observatory alerted the international astronomy community about the detection of a high-energy neutrino. Approximately 20 observatories on Earth and in space made follow-up observations, which allowed identification of what scientists deem to be a source of very high energy neutrinos, and thus, of cosmic rays. Besides neutrinos, the observations made across the electromagnetic spectrum included gamma-rays, X-rays, and optical and radio radiation. Map by Nicolle R. Fuller/NSF/IceCube

These concurrent spikes in gamma ray energy and neutrinos detected from a single source over the same period of time confirmed that blazars are the first known cosmic particle accelerators, researchers said. 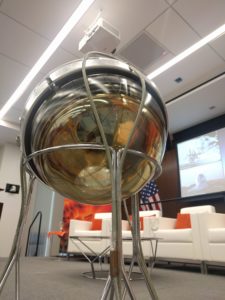 This is an optical sensor, identical to the 5,000 devices buried up to a mile under the ice at the IceCube Neutrino Observatory. Light generated in a neutrino collision event is collected by the gold-colored dish and transformed into an electrical signal. Photo by Amanda Grennell

Neutrinos could be used to monitor nuclear proliferation, send messages through walls or even detect the ever-elusive dark matter. But in truth, physicists want to use them to discover more about the universe.

“Neutrinos provide us a way of exploring the dark side of the universe — regions from which electromagnetic radiation does not reach us,” said Olga Botner, an experimental particle physicist at Uppsala University and former IceCube lab spokesperson. “We can look at objects that we’ve never even seen before.”

Tracking neutrinos also helps physicists in their century-long pursuit to map the origins of cosmic rays — particles with the highest energies ever observed. Physicists think high-energy neutrinos started out as cosmic rays accelerated by the blazar. Knowing the locations of cosmic rays and neutrinos can helps scientists to understand the behaviors of interstellar magnetic fields and other elements our universe.

Editor’s note: The IceCube Neutrino Observatory is funded by the National Science Foundation, which is also a supporter of the PBS NewsHour.

Left: When a supermassive black hole starts to devour the galaxy around it, jets of high-energy radiation can shoot straight toward Earth, creating a "blazar." Thanks to a new study, we now know high-energy neutrinos and gamma rays are part of this jet stream, too. Image by National Science Foundation

Drones are revolutionizing how we study humpback whales