What’s behind a unibrow?

Sometimes it seems like hair does everything except what you want it to do. A new study of the genes behind balding, hair curliness and other hair conditions could help explain why hair sometimes sprouts between our eyebrows, turns gray, thins in a pattern, or grows on our chins.

Geneticists at University College London performed a genome-wide association study of more than 6,000 Latin American individuals. They evaluated the subjects for seven different hair features — curliness, color, graying, balding, unibrow, brow thickness and beard thickness — and then scanned the genome looking for single-letter changes that correlated with these traits.

Their report, published Tuesday in Nature Communications, found 18 regions of interest, 10 of which were new to science. Some regions were found to influence more than one trait, but most regions were specific to one of the hair qualities studied.

Further research will be needed to zero in on the individual genes in question. “The genome-wide association study basically shows you landmarks, hot spots, regions of activity,” points out Rui Yi, a developmental biology professor at the University of Colorado, who was not involved in the study. “But you don’t know which nucleotide is creating that activity.” 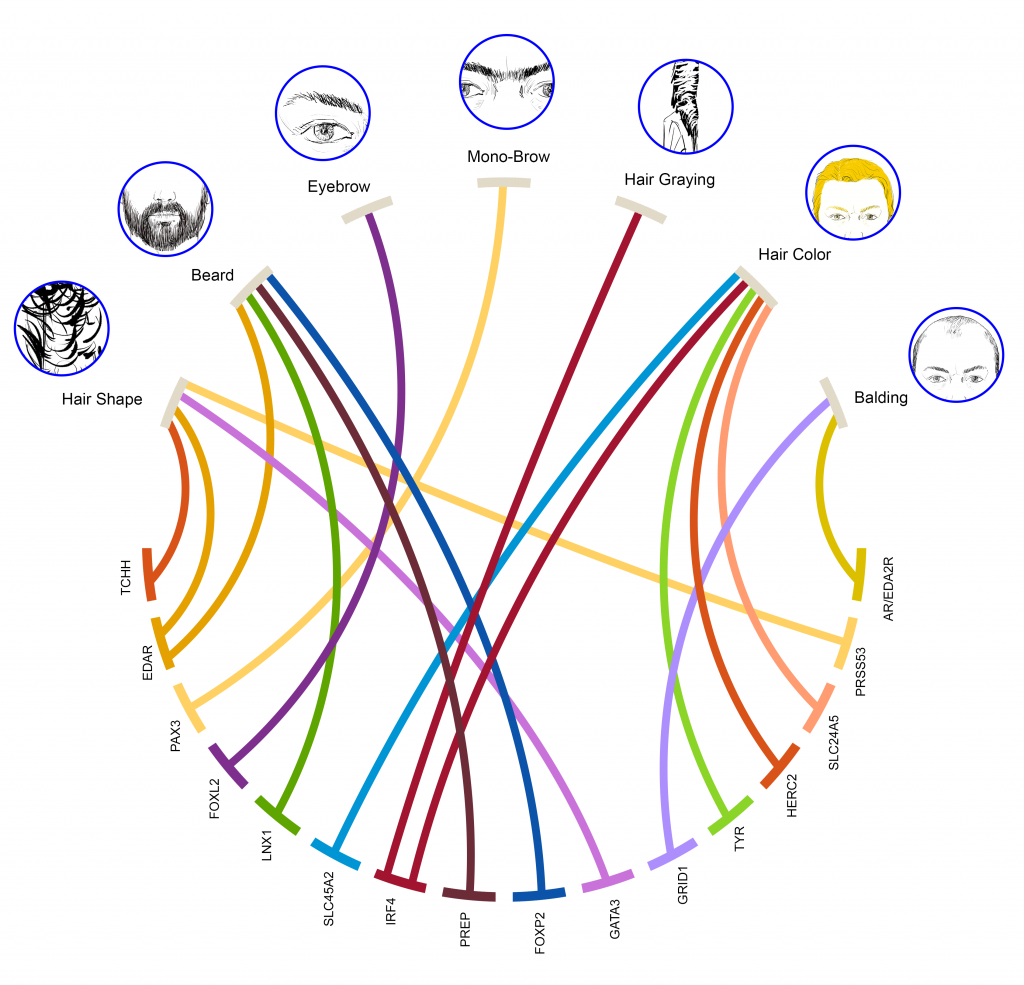 An overview of the study’s findings, connecting seven different hair features with the genetic regions that contribute to their appearance. Photo by Kaustubh Adhikari, Emiliano Bellini, Andres Ruiz-Linares

Identifying these genes could in theory help researchers develop ways to stop unwanted hair growth, and to promote hair growth when and where we want it.

This article is reproduced with permission from STAT. It was first published on March 1, 2016. Find the original story here.

Left: A new study looks into the genetics behind unibrows and other hairy facial features. Photo by Popperfoto/Getty Images

Leah Samuel is a staff reporter for STAT. A journalist for over 25 years, Leah’s work has appeared in newspapers and magazines across the country, including Harvard Magazine, Labor Notes, The Chicago Reporter, and PublicSource.org. Leah is also a film fan, history buff, science nerd, and trivia nut. When she's not working on a story, she frequently replaces her notebook and pen with yarn and a crochet hook.