What’s in a name? In physics, everything and nothing

The term “Big Bang theory” began as an insult, but it ushered the idea into pop culture, spawning namesakes like the CBS sitcom about scientists. Photo by Monty Brinton/CBS Broadcasting Inc.

If it were up to Peter Higgs, the Higgs boson would be called “ABEGHHK’tH,” an unpronounceable amalgamation of the eight scientists whose work served as basis for the theory in the 1950s and 1960s: Philip Anderson, Robert Brout, Francois Englert, Gerald Guralnik, Carl Hagen, Peter Higgs, Thomas Kibble and Gerard ‘t Hooft.

In theoretical physics, naming — while often somewhat arbitrary — can be key to launching an obscure idea to a household name. So how does a particle or a theory acquire its name?

It’s a bit of whimsy, a bit of pop culture and a touch of marketing, said David Kaiser, a science historian and physicist at MIT. In his field of physics, papers are published every hour of every day of the year around the world, and having a catchy name can help set your research apart from the never-ending flow of studies, Kaiser said. Even if it isn’t a truly accurate description. And often, it’s not. 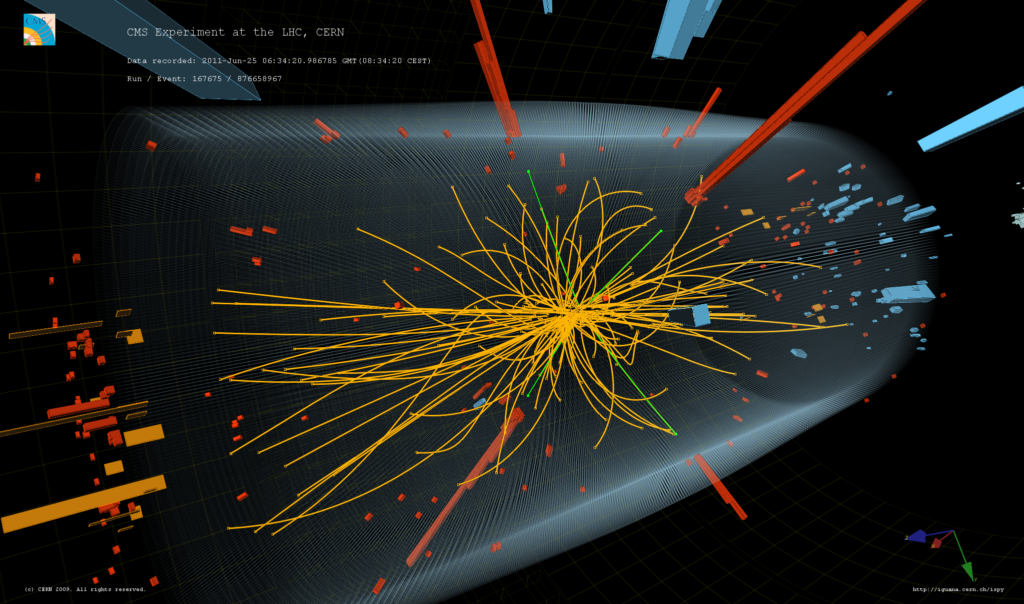 Image of the proton collision events from the Large Hadron Collider. Image by CERN.

‘The God(damn) Particle,’ or how the name ‘Higgs’ stuck

Peter Higgs wasn’t the first researcher to publish on the idea of a ghostlike energy field that endows other particles with mass. Robert Brout and Francois Englert take that honor — they published their first paper on the theory in August 1964. Higgs’ first paper wasn’t published until the following October. But none of their work made a splash in the field of physics until the 1970s, when the field recognized the idea as plausible, said Sean Carroll, physicist at the California Institute of Technology.

There are two-and-a-half theories to explain why Higgs’ name won the title, Carroll said. One is that the works of Higgs, et al., were cited in a study by Steven Weinberg in 1967, but Higgs was listed first, unintentionally leading later researchers to cite his work ahead of the others. The second is that physicist Benjamin Lee, who wrote and spoke about the theory and is credited with popularizing it, read Higgs’ paper first, and began using the shorthand “Higgs” to describe it, Carroll said. And finally, he said, “Higgs boson” just sounds better than “Brout boson.”

“Once it was there, there was never a strong attempt to change it,” Carroll said. “And it’s just a name.”

The particle took on a more provocative moniker in the 1990s: “the God particle,” a name that makes many physicists groan.

In 1993, Congress debated cutting funding for the Superconducting Super Collider, a predecessor to the Large Hadron Collider. Physicist Leon Lederman, in an effort to raise public support for the Super Collider and the hunt for the Higgs particle, published a book that year on the history of particle physics titled “The God Particle,” a marketing term he knew would capture public attention, Kaiser said. Though it didn’t save the Super Collider, the name stuck, leading Lederman and other physicists to wryly call it “the goddamn particle.”

“I understand Lederman’s motivation at the time,” Kaiser said. “If you call it ‘God particle’ or ‘best particle of all time,’ it helps capture the importance of the project. But we can’t get rid of that damn name 20 years afterward.” 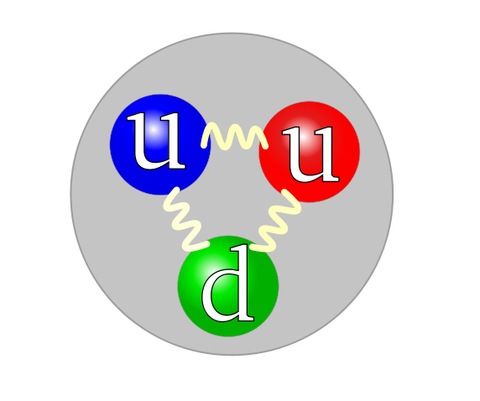 The quark structure of a proton, with two up quarks and one down quark. Quarks have no visible color, but using red, green and blue helps physicists classify their properties. Image by Arpad Horvath/Wikimedia Commons.

James Joyce inspired the name for quarks, but scientists gave them their color and flavor

The name for quarks — the elementary particles that make up hadrons, which in turn make protons and neutrons — has a literary origin. When Nobel prize-winning physicist Murray Gell-Mann discovered these particles in 1964 he had a sound in mind for their name — “kwork.” But he came across the line, “three quarks for Muster Mark” in James Joyce’s “Finnegan’s Wake” and the made-up word fit the sound, Gell-Mann decided. And it didn’t hurt that it was associated with a group of three, just like his quarks.

Physicists often get stuck with boring names for their work, Carroll said, and in the case of quarks, they needed to distinguish their characteristics. So they got creative, he said. Gell-Mann and George Zweig gave them “flavors” to describe their spin and electric charge — up, down and strange. Later physicists added the flavor “charm” to the mix, and quarks were further designated by the colors blue, green and red, even though the particles have no visible colors.

“Finnegan’s Wake” may not be au courant with young physicists today, but new physics concepts still reflect current pop culture, Kaiser pointed out. Dartmouth physicist Robert Caldwell’s “phantom energy menace” (“phantom energy” being a type of dark energy that is accelerating the universe’s expansion so fast it may tear space apart) alludes to the Star Wars film “The Phantom Menace.” “Warp drive” research conducted by NASA’s Harold White was so named because, if he is successful, astronauts could achieve Star Trek-like space travel.

The “Big Bang” was an insult, not an explosion

It’s not just particles that get misleading titles. While the term “the Big Bang theory” evokes an image of a giant explosion, it was really a rapid expansion, not a singular blast, according to physicist and author Brian Greene of Columbia University.

But the name “Big Bang” started as an insult. When Belgian priest Georges Lemaître proposed the theory in 1931, he called it “the hypothesis of the primeval atom,” saying that the universe began with the explosion of the “primeval atom.” Physicist Fred Hoyle believed in a stable universe model, and in a 1949 radio interview derided Lemaitre’s idea, calling it “the big bang,” supposedly to make it seem childish and silly, Kaiser said.

Any literal interpretation of the term is grossly misleading, but it makes teaching the theory easier, says Greene.

“One of the best ways to teach is to have something misleading as a foil,” he said. “It wasn’t really a bang, but when I try to make a visual representation of the early universe, we still use imagery that evokes an explosion. As long as you use that to help your audience understand, it’s easier to explain what it’s not.”

When missing mass became dark matter, the WIMPS and MACHOS duked it out

Sometimes an idea needs a better name, not just for the public perception but for the science community as well, Carroll said. That was the case for what was called “the missing mass problem” when he started studying physics in the 1990s. Scientists knew there was unobservable matter in the universe that neither emitted nor absorbed light. But the term “missing mass” was problematic. Scientists don’t typically study something that is missing, Carroll explained. “Dark matter”, on the other hand, was a mysterious term that gave researchers something to think about.

“The existence of these words made it more intellectually respectable to take these ideas seriously,” he said. “It’s marketing, but it’s deeper than that. It’s how we conceptualize the problem.”

It’s important to give new theories and yet-unproven particles names, so these ideas can be discussed, Greene said. There are unions which determine nomenclature in biology and chemistry, but in physics, names and labels have always come second to understanding the concept, he said.

New stars and planets are a different story. Naming a new planet has strict conventions and an international consortium to moderate the process. These are objects that don’t have a name when they are discovered, he said. It takes years in some cases to prove their existence. In 1919 the International Astronomical Union was formed to name the stars, constellations and planets and to create rules and conventions for naming new celestial objects. Scientists can submit names to the IAU for consideration, but there are a lot of rules, which you can read here.

For example, dwarf planets outside of Neptune’s orbit must be given the name of a deity related to creation, fertility or childbirth and they can’t share a name with other small solar system objects. Comets are no longer named for their discoverers, but instead are assigned a letter (“p” for a periodic or recurring comet, “c” for a comet that is not periodic), followed by the year of discovery, an uppercase letter identifying the half-month of observation during that year and a number representing the order of discovery within that half month.

Some of these names and labels will stand the test of time, Kaiser said, but it’s important to remember that these are just titles, a way to start explaining things we are only beginning to grasp.

“Being a theoretical physicist is exciting, but often we are designing universes we don’t get to visit or move to. It’s a beautiful fantasy,” he said. “Naming things is a balance between taking ourselves too seriously and not too seriously.”