When scared, the crested pigeon screams with its flapping feathers

Sometimes, a ruffle of feathers can say more about a bird’s situation than its chirps, coos and caws.

Take the crested pigeon. Its mere act of taking frantic flight is enough to alert its flock of looming danger. In the midst of a predator, this pigeon’s fluttering feathers create a high-pitched whistle that sounds awfully similar to other birds’ vocal calls. Otherwise, the crested pigeon doesn’t make a peep, nor sing with its voice.

Researchers have long known about the crested pigeon’s “non-vocal” signal, but it wasn’t until Thursday that they reported the exact wing feather sounding the alarm. The findings back an idea proposed by Charles Darwin 150 years ago.

What they did: “Lots of animals produce sounds when they move. And for a long time, people just considered all non-vocals as cues from movement and not as ‘evolved signals,’” said Trevor Murray, a behavioral ecologist at the Australian National University and coauthor of the new study in Current Biology that details the mechanics of the’ alarm calls. “New technologies allowed us to explore how non-vocal sounds became crucial for survival.”

Murray’s colleagues originally speculated in a 2009 paper that a single feather from this native Australian bird produced a tone to notify others of predators. But at that time, the team didn’t have the best means to test their hypothesis.

So in their latest study, the ANU researchers captured high-resolution, high-speed video of birds in flight, and then conducted feather-removal experiments to test how one pigeon’s modified feathers affected the flock. (Don’t worry, no bird got its feathers plucked. It was more like a minor, painless trim.)

With these techniques, the team found that alarm sounds resonated from the pigeons’ eighth primary flight feather, which happens to be the narrowest of the wing, at a maximum of 14 beats per second. 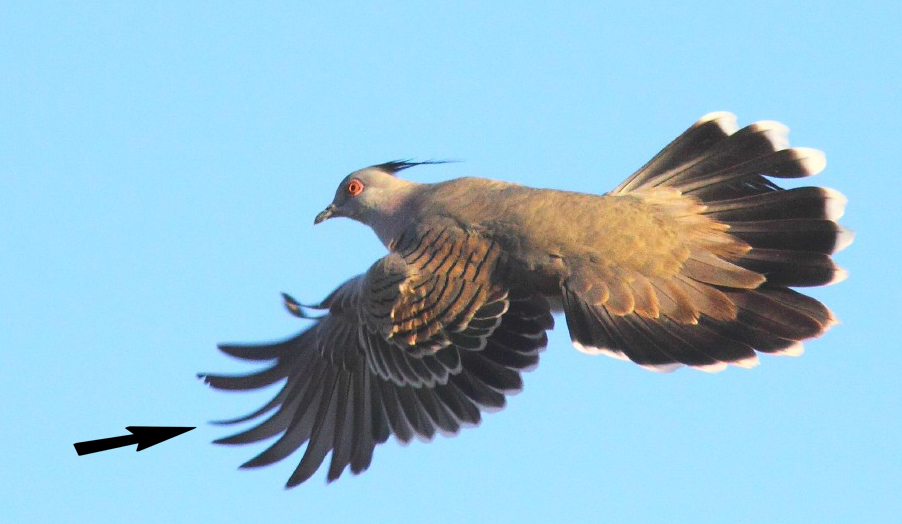 Seen here is a crested pigeon in flight, with its eighth primary wing feather in clear sight. It’s the narrowest feather on the flared wing. Photo by Geoffrey Dabb

What it means: When flapping as they fled a gliding hawk model or a running person, the bird’s eighth feather produced a sound on the downstroke. And as it flapped faster, the sound increased in tempo. Crested pigeon wings produce both high and low notes when in flight. And the experiments showed that the eighth wing feather produced high notes, and the low notes came from the ninth primary feather on an upstroke.

Later, the researchers played recorded flight sounds to other pigeons. Flock members were more likely to take off when hearing a flying bird with an intact eighth primary feather. When researchers played the sound of a pigeon with that removed eighth feather, the pigeons often looked around all confused instead of retreating. The playback experiments showed only the high notes are key for alerting other birds.

Out in the wild and during different seasons, birds molt their worn-out feathers to grow pristine ones. When crested pigeons molt, they’re at a slight disadvantage for weeks or months and can’t audibly tell their comrades to flee, similar to the feather removal experiment.

Why you should care: The importance of non-vocal communication was initially proposed nearly 150 years ago by Charles Darwin. According to his book, “The Descent of Man, and Selection in Relation to Sex,” Darwin wrote that wing sounds — as well as animal non-vocals in general — are equally as evolutionarily vital for survival as vocal communication.

Darwin wrote that wing sounds (as well as animal non-vocals in general) are equally as evolutionarily vital for survival as vocal communication.

Murray’s team noted in the study that wing sounds “evolved at least 70 times, in many [animal] orders” and in many bird species. Several other birds, such as hummingbirds, manakins and owls, evolved different kinds of non-vocal wing signals.

For example, the crested pigeon’s rapid flapping produces sounds automatically and at higher tempos, which shows a sense of urgency to flee. Murray said that these sounds are only produced when a predator is near and not during casual flight. And in male calliope and rufous hummingbirds, a previous study found that the tiny birds produce “trills” when they fly, which is perfect for attracting the attention from the ladies.

More experiments are needed to better explain how non-vocal communication evolved in birds, and in all animals, Murray said.

“These non-vocal signals are very reliable,” Murray explained. “Anyone else around who would hear [these sounds have] an incentive to pay attention. So both the sound producer and the listener have a survival advantage.”

Left: A pair of crested pigeons, native to mainland Australia, flock together. Photo by Geoffrey Dabb