Where will wild things go once their land is gone?

In just two decades, the world has lost about a tenth of its wilderness, according to an investigation in Current Biology. The study compared an updated map of wilderness — biological and ecological landscapes mostly free of human disturbance — with those charted in early 1990s. The scientists found that the area that had been destroyed was large enough to cover Alaska twice.

“If this continues, we could lose all wilderness areas within 50 years.” — James Watson, director of the Wildlife Conservation Society’s science and research initiative

“Losing 10 percent of global wilderness in 20 years shocked me,” James Watson, study co-author and director of the Wildlife Conservation Society’s science and research initiative, told the NewsHour. “If this continues, we could lose all wilderness areas within 50 years.”

Watson and his team analyzed data on population density of humans in an area, land use transformation, accessibility of the area to people and electrical power infrastructure. The researchers examined these variables in order to map how humans have impacted the Earth and to what degree. They concluded that children born today may lose wilderness areas in their lifetime.

“I was worried about the loss of wilderness around the world and realized that no thorough map had ever been made,” Watson said. 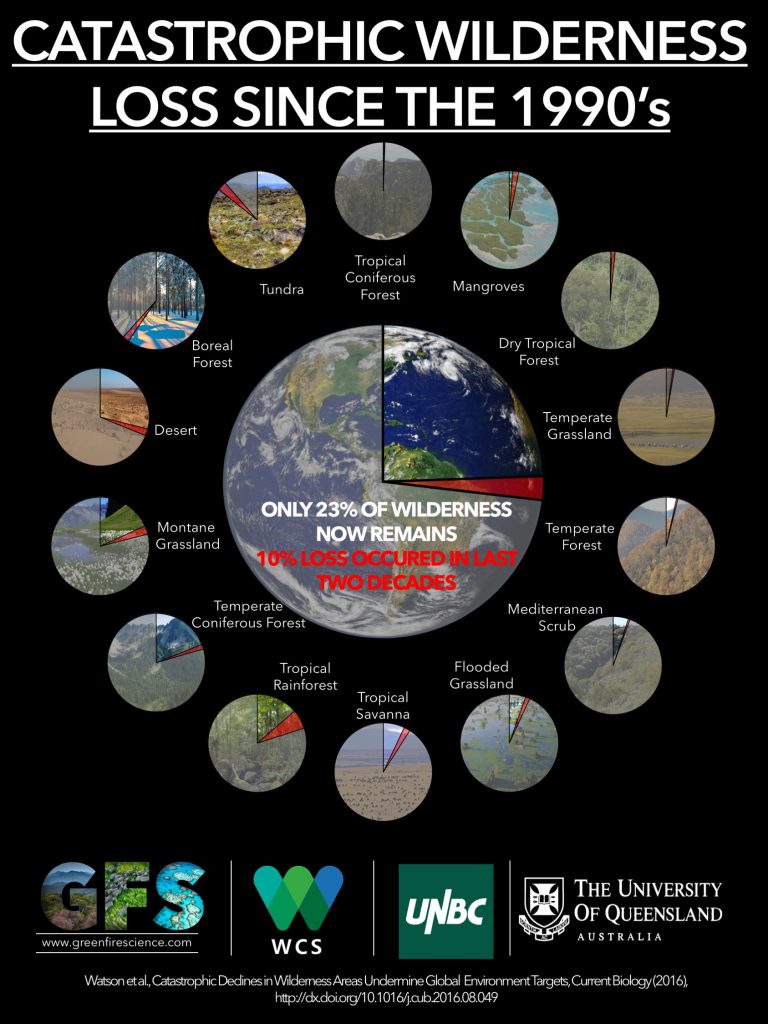 The Amazon and central Africa were hit the hardest over the last 20 years, based on the team’s estimations. The Amazon — a rainforest twice the size of India and home to more than 10 percent of the living species on Earth — dwindled by 30 percent. Central Africa lost 10 percent of its wilderness.

The mapping study also showed that current international conservation initiatives, like the Paris Climate Change Agreement and various UN initiatives, are not slowing the decline of wilderness, which is happening at double the pace of all preservation projects. One shortcoming is the rate at which lands earn protected status. Other barriers include funding limitations for these projects and political gridlock.

Greg Asner is a global ecologist at the Carnegie Institution for Science that assesses forests across the globe for biodiversity and signs of deforestation. After tracking down an area with Internet access in the Ecuadorian Amazon, Asner told the NewsHour that the new study proves that remote wilderness is not immune to human influence.

“The take-home message is that conservation and climate mitigation policy need to address all of the world’s natural ecosystems, not just the ones that conservationists think are the most threatened, based on the old way of thinking,” Asner said.

Watson said there is an urgent need for international policies that will protect these wild areas. “People should realize that their natural heritage is disappearing in front of their eyes,” he said. “Maybe they should think of their children and ask their political leaders to prioritize the protection of these important places.”

Left: Danum Valley in Borneo, which has been affected by deforestation. Photo by Liana Joseph courtesy of Cell Press