Which are smarter, cats or dogs? We asked a scientist

It’s a debate we can never seem to settle: Are cats smarter? Or are dogs? Dogs learn and respond to commands; cats usually don’t. But cats are cunning hunters with a boundless curiosity.

To settle this debate, PBS NewsHour posed the question to three scientists — a neuroscientist, a dog cognition expert and a cat behavior and cognition researcher. When one of these scientists counted the brain cells in these animals, there was a clear winner. Still, the latest behavioral research on animal intelligence challenges all our old-school notions on what it means to be smart.

Dogs have more nerve than cats

Neuroscientist Suzana Herculano-Houzel studies animal intelligence by digging deep into gray matter. She liquifies animal brains to count their neurons. And what she’s found is that dogs have twice as many neurons as cats.

Neurons process and send information throughout the central nervous system. Herculano-Houzel’s team tallied the number of neurons in the cerebral cortex — the wrinkly outer layer of the brain — of various species. The brains belonged to eight carnivorous mammals: cats and dogs, along with ferrets, mongooses, raccoons, hyenas, lions and brown bears. The study was published in late 2017 in the journal Frontiers in Neuroanatomy.

These were brains of already dead animals donated by a zoo, a forest preserve, a wildlife rehab facility and several pet owners.

The technique, developed by Herculano-Houzel and originally used to reveal the number of neurons existing in the human brain, dissolves the brain and liquefies each neuron. Once mushed to an “unfiltered apple-juice” consistency, only free-floating nuclei from neurons remain in the “brain soup,” which a researcher can then count.

This method helped the team discover that dogs possess about 530 million neurons in the cortex, while cats have about 250 million. For perspective, the human cortex contains 16 billion neurons. Herculano-Houzel said it’s possible even small dogs, like chihuahuas or corgis, have more neurons than cats.

“Then the logical implication is that, yes, dogs are much more capable than cats,” Herculano-Houzel said. 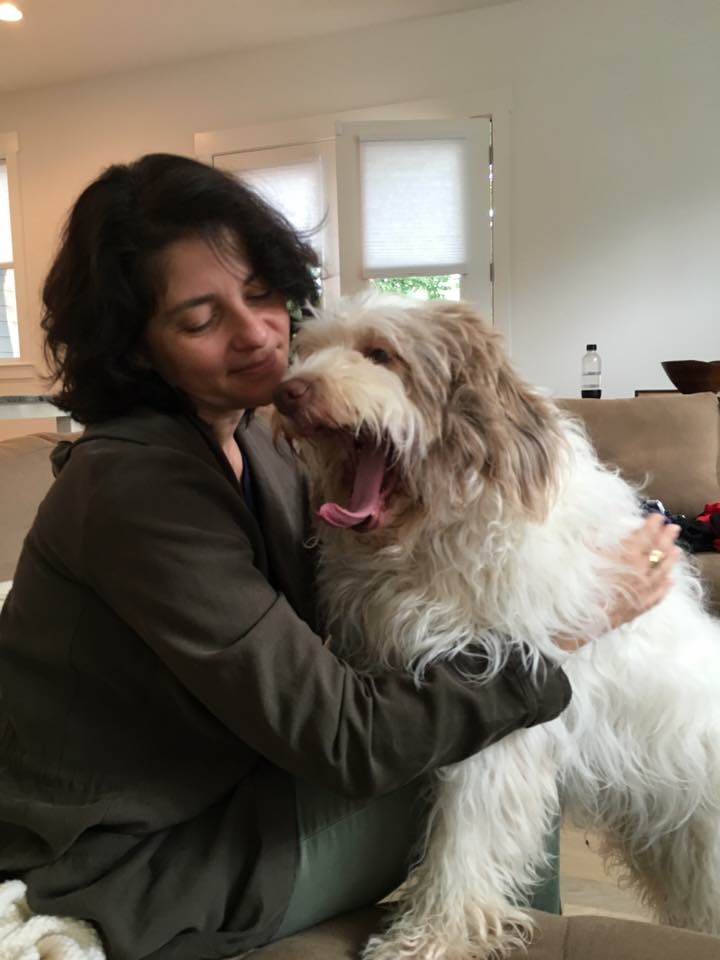 Herculano-Houzel disclosed that she kept her biases out of the research, but said her dog, Mielina, is a great example of why dogs are smarter than cats. Photo by Suzana Herculano-Houzel

Beyond dogs and cats, the team found a few surprises among the other animals. For example, the largest animals in the bunch—the hyena, lion and brown bear—had fewer neurons than the smaller ones. Neuroscientists long suggested that brain size might indicate more “braininess.” Read: the bigger the brain, the smarter the animal. But Herculano-Houzel’s team found that bears had the same number of neurons in their cortex as cats.

Another surprise in their research came from raccoons, those clever masked bandits. The raccoon brain is the size of a cat brain, but it holds as many neurons as a dog’s. The ratio of the raccoon’s brain size to its number of neurons resembles that of some primate brains.

“The very large number of neurons that we found in the raccoon cortex fits very nicely with the lore about raccoons,” Herculano-Houzel said. “It matches with how incredibly ingenious these little creatures are and how good at problem solving they are when it comes to finding food.”

Herculano-Houzel’s team also looked at neuron numbers in herbivores collected by other groups because they suspected grazing required less energy and brain power, thus fewer neurons. But they found herbivores packed as many neurons as their carnivore counterparts. The same balance applied when they compared domesticated versus wild animals.

All this suggests that brain size doesn’t matter. Evolution and breeding didn’t favor a species or body size when it came to neuron count. Intelligence comes in any sized package, Herculano-Houzel said.

Brian Hare, the founder and director of Duke University’s Canine Cognition Center, is cautious when pitting species against each other in the intelligence debate. Hare said many scientists avoid the term because intelligence is typically studied from a human-centric perspective.

“Asking which species is smarter is like asking if a hammer is a better tool than a screwdriver.”

“Asking which species is smarter is like asking if a hammer is a better tool than a screwdriver,” Hare, who did not contribute to Herculano-Houzel’s study, said via email. “Each tool is designed for a specific problem, so of course it depends on the problem we are trying to solve.”

Each species has been shaped by evolution to solve the problems most critical to its survival and reproduction, he continued. Seeing a dolphin sitting in a tree looks as silly as a chimpanzee fishing in the sea. But research shows that both dolphins and chimps are geniuses in their natural habitats.

So how should scientists go about studying animal cognition without a hierarchy of intelligence?

“A lot of what we already know about intelligence in other species falls on a gradient or a spectrum,” said Kristyn Vitale Shreve, a cat cognition and behavior research fellow at Oregon State University.

Consider hunting abilities, for example. Cats sit on the skilled end of the spectrum, while dogs sit in the middle and humans near the low end. But if we test the three on math, humans shift toward the intelligent side while dogs and cats move away.

In other words, we should avoid pitting different species against each other because they’re intelligent in different ways. But Vitale Shreve said we need comparative studies to see how overall behaviors relate to the physiology of the brain–particularly with what we now know about the neuron quantities in different brains. 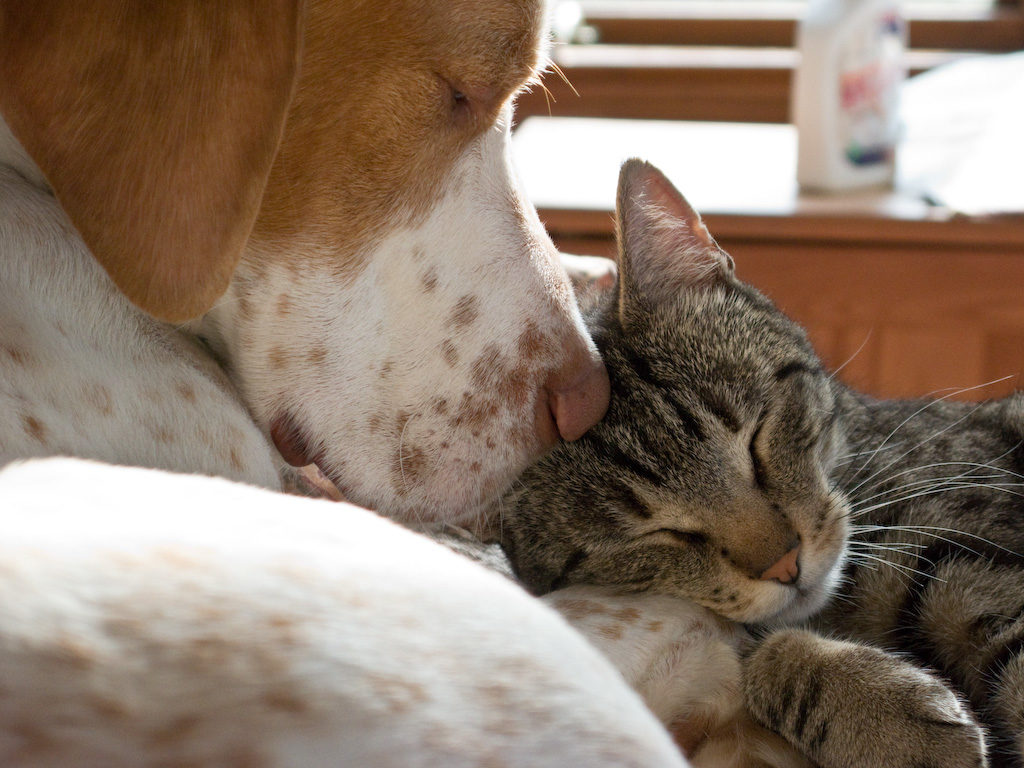 Regardless of how many neurons dogs and cats have, they’re still intelligent creatures who love you and deserve your love too. Photo by Roger H. Goun/via Flickr

Vitale Shreve and Herculano-Houzel both said that it’s difficult to study intelligence using behavioral studies, which typically involve on animals performing tasks or solving puzzles. Also, few studies have directly compared dog and cat cognition, and in fact, only a handful of researchers study cats at all. Vitale Shreve said until scientists find the right methods to investigate dogs and cats together, it’s really not fair to make comparisons.

“There’s this perception of cats being untrainable or maybe hard to work with,” Vitale Shreve said. “Cats display a lot of individual variation and have distinct personalities, which make it hard for researchers to understand them.”

In summary, intelligence is a nuanced and complicated thing. But Herculano-Houzel has a message she’d like to deliver to all pet owners:

“Please love your cats and dogs alike as much as you want,” she said. “Regardless of how many neurons they have.”

Left: The perennial debate continues: Which are smarter, cats or dogs? The NewsHour decided to ask a scientist.