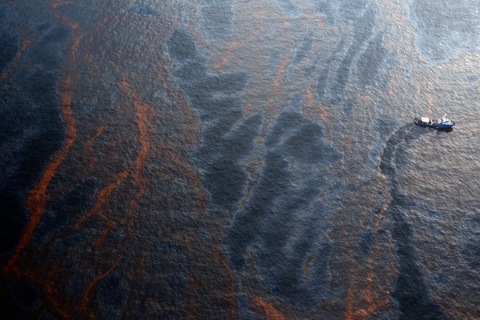 A boat makes its way through a vast oil spill in the Gulf of Mexico on April 28. (Photo by Chris Graythen/Getty Images). More images below.

As a massive oil slick in the Gulf of Mexico creeps to within a day of reaching the Louisiana coastline, the Obama administration on Thursday promised an aggressive multi-agency effort to contain any further environmental damage.

Speaking in the Rose Garden, President Obama said his administration would use “every single available resource at our disposal” to limit the fallout from the oil spill. The president also said all costs of the spill will be the responsibility of the oil industry, not U.S. taxpayers.

Earlier in the day, Homeland Security Secretary Janet Napolitano announced at a White House briefing she is labeling the spill an event of “national significance,” a designation that will allow the administration to transfer additional people and equipment to the region more easily.

During the hour-long briefing featuring Cabinet heads and other top officials, the Administration defended its response so far and that of BP, which owns the oil rig that exploded and sank last week about 50 miles off the Louisiana coast.

Coast Guard officials say as many as 5,000 barrels a day — or more than 200,000 gallons — may now be leaking from the rig’s location at the bottom of the ocean. That’s five times more than what the government or BP had been projected since the rig sank, leading to worries of significant environmental damage to the marshlands near the shore and the species inhabiting it.

“We are assuming the worst case so we will be prepared for that,” Coast Guard Rear Admiral Sally Brice O`Hare told reporters.

Moreover, the prospects for stemming the spill quickly do not look good. Government officials acknowledged today it may be three months before a relief valve can be installed to completely stop the leak.

Top officials also said the spill — and the investigation into the cause of it — could ultimately impact future decisions about offshore drilling. But they were careful to avoid suggesting the President has changed his mind about the broader possibilities. Obama has proposed ending the moratorium on offshore drilling along certain spots of the Eastern Seaboard the Gulf Coast.

“There will be ample opportunity for public input, for congressional input,” before any new permits for offshore drilling are granted, said Carol Browner, the assistant to the President for Energy and Climate Change. “We need to learn from the incident. What’s occurring now will be taken into consideration as the Administration looks ahead.”

The Department of Defense is looking at how it may be able to assist in the operation.

“We are right now in the process of assessing what capabilities we might be able to bear and whether they will be helpful,” said Geoff Morell, the press secretary at the Pentagon.

Coast Guard Rear Adm. Mary Landry said a controlled test burn of spilled oil was successful on Wednesday. BP was to set more fires, but there were no more burns as night fell, The Associated Press reported. No burns were planned for Thursday as conditions on the Gulf deteriorated. 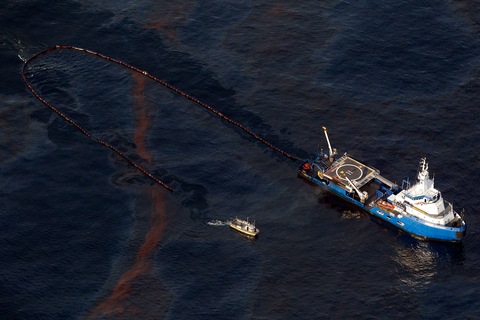 An estimated 5,000 barrels of oil a day — or more than 200,000 gallons — are believed to be leaking into the Gulf, according to government officials. (Photo by Chris Graythen/Getty Images). 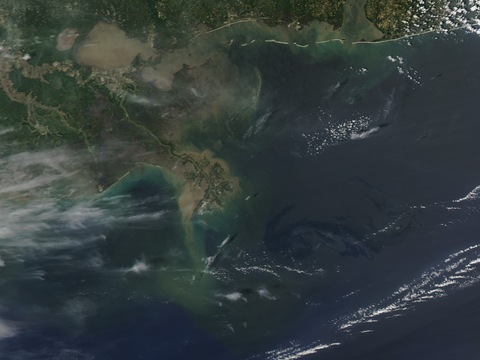 The spill, as viewed Tuesday by a NASA satellite, is expected to reach the Louisiana coastline as early as Friday.