Congressman. Museum owner. Climate change denier. That’s a sample of the terms used to describe Jim Bridenstine, who was confirmed Thursday as the 13th NASA administrator. He is the first member of Congress to hold the position.

Bridenstine, an Oklahoma Congressman and a former Navy pilot, has faced turbulence on his journey to lead America’s space agency. Here’s what you need to know:

How we got here: NASA has sought an administrator for nearly 15 months, since former astronaut Charles Bolden stepped down on the day of Trump’s inauguration. It’s the longest vacancy ever for the position in the space agency’s 59-year history.

Robert M. Lightfoot Jr. filled this void as acting administrator, but is due to retire on April 30. Before stepping in, Lightfoot had served as associate administrator, the third-highest ranking position at NASA.

The space agency had faced the scenario of having no clear successor after Lightfoot’s departure, as his former position and NASA’s deputy director gig (No. 2 in line) are currently held by acting appointees. 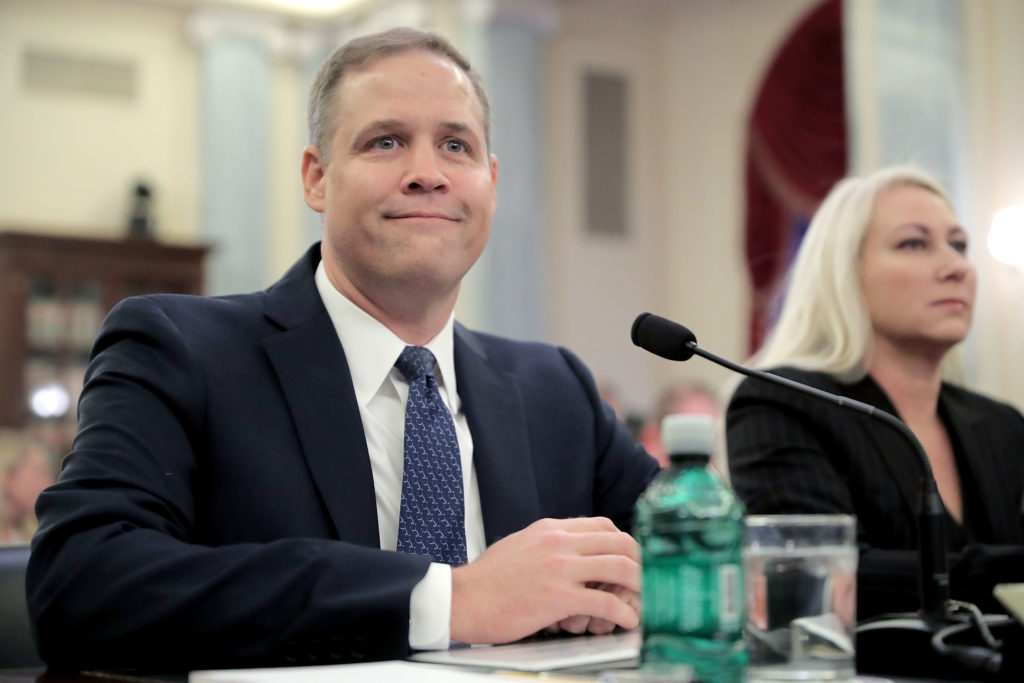 Rep. James Bridenstine (R-OK) testifies before the Senate Commerce, Science and Transportation Committee during his confirmation hearing to be NASA Administrator in November 2017. Democratic members of the committee expressed reservations about Bridenstine’s qualifications to head NASA, including his political career and lack of science credentials. Photo by Chip Somodevilla/Getty Images

Trump had originally picked Bridenstine for the post in September. Following a contentious confirmation hearing a month later, the Senate allowed his nomination to expire when Congress took its December recess. (You can read a rundown of the first hearing here and watch it here.)

During the hearing, Bridenstine faced criticism in part for lacking a formal scientific background, but mainly for his political history, including his views on the LGBTQ community, which Senate Democrats labeled as “discriminatory.” After the Supreme Court held up same-sex marriage as constitutional in 2013, Bridenstine described the decision as a disappointment. He also criticized Obama’s executive order to allow transgender students to use the bathroom of their gender identity.

Senators at the hearing highlighted previous comments by Bridenstine downplaying anthropogenic climate change, including one in 2013 where he told Congress that global warming had “stopped rising 10 years ago.” (That’s not true, according to data collected by NASA and NOAA.) Bridenstine walked back his comments on climate change during the hearing, though he stopped short of admitting humans are the primary cause. In a move of support, Senator Roger Wicker (R-MS) stated his belief that Bridenstine would not “inject” his philosophies about climate change into NASA’s mission.

Both Republican and Democratic members on the committee voiced their support of Bridenstine’s goals for NASA, which lean toward space pioneering across the solar system. Both sides also praised Bridenstine’s military service career.

How Bridenstine was confirmed: On Wednesday, the Senate was deadlocked during a procedural motion meant to advance Bridenstine’s nomination for full confirmation, until Senator Jeff Flake switched his “no” vote.” The Republican from Arizona told CNN that he “still has some issues” related to questions submitted to CIA director Mike Pompeo about Bridenstine, but was voting “yes” despite not receiving “satisfactory answers.”

Marco Rubio also reversed his opposition to Bridenstine, which the Florida senator voiced in a September interview with POLITICO:

Rubio said he and Nelson “share the same concerns” and worry Bridenstine’s “political baggage” would weigh him down in a GOP-led Senate that has grown increasingly resistant to Trump. NASA can’t afford that, Rubio said.

Rubio, whose state is home to Kennedy Space Center, said in a statement Wednesday:

“While I wish the President would have nominated a space professional to run NASA, the unexpected April 30 retirement of the Acting Administrator would leave NASA, an agency whose mission is vital to Florida, with a gaping leadership void unless we confirm a new Administrator. Because of this, I decided to support the nomination of Rep. Bridenstine. I expect him to lead NASA in a non-political way and to treat Florida fairly.”

The Senate voted 50-49 along party lines on Thursday — John McCain was absent due to illness — to confirm Bridenstine as NASA administrator.