Why do tumbleweeds tumble?

Tumbleweeds might be the iconic props of classic Westerns. But in real life, they’re not only a noxious weed, but one that moves around. As they roll and bounce, pushed by gusts of wind, they can overwhelm entire neighborhoods, as happened recently in Victorville, California, or become a threat for drivers and an expensive nuisance for farmers.

“They tumble across highways and can cause accidents,” said Mike Pitcairn, who tracks tumbleweeds at the California Department of Food and Agriculture in Sacramento. “They pile up against fences and homes.”

And tumbleweeds aren’t even originally from California, or the West for that matter.

“It’s been around a long time. You think it must be native,” said Pitcairn. “But its common name is Russian thistle.”

A U.S. Department of Agriculture employee, L. H. Dewey, wrote in 1893 that Russian thistle had arrived in the U.S. through South Dakota in flaxseed imported from Europe in the 1870s.

“It has been known in Russia many years,” Dewey wrote, “and has quite as bad a reputation in the wheat regions there as it has in the Dakotas.” This is where the name Russian thistle originates, said Ayres, although tumbleweeds aren’t really thistles. 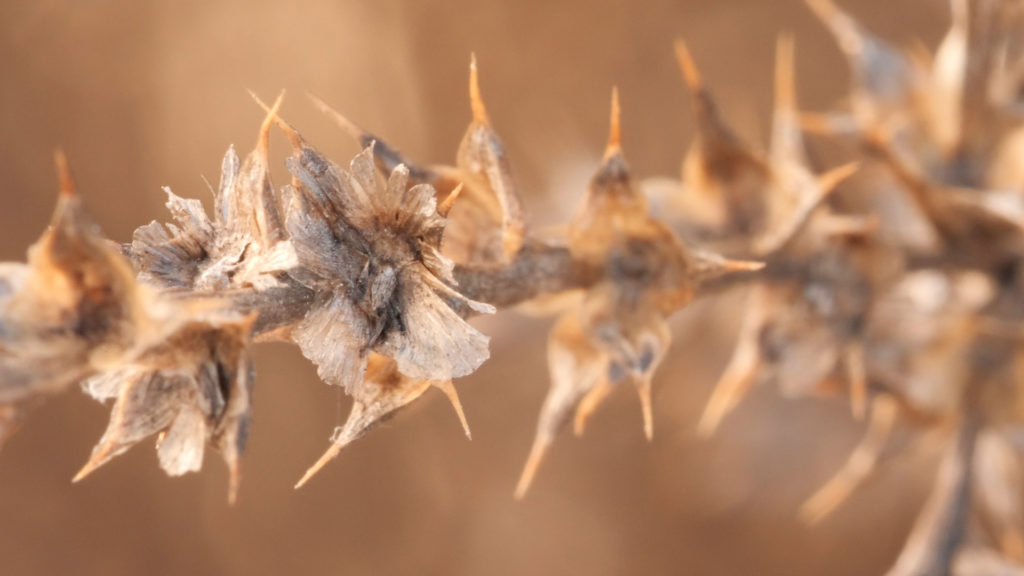 Tumbleweeds are known by the common name Russian thistle, although they’re not thistles. In the late fall and winter, Russian thistle plants dry out. The structure that looks like a dried-out flower is a seed. As tumbleweeds tumble, their seeds fall off at a distance from each other. This gives each one sunlight and space to grow. Photo By Josh Cassidy/KQED

By the end of the 1800s, Russian thistle had arrived in Southern California’s Antelope Valley and Bakersfield. The weed spread quickly through the United States — on rail cars and through contamination of agricultural seeds. And by tumbling.

“They tumble to disperse the seeds,” said Ayres, “and thereby reduce competition.”

By bouncing and rolling in the wind, a tumbleweed spreads out tens of thousands of seeds so that they all get plenty of sunlight and space. 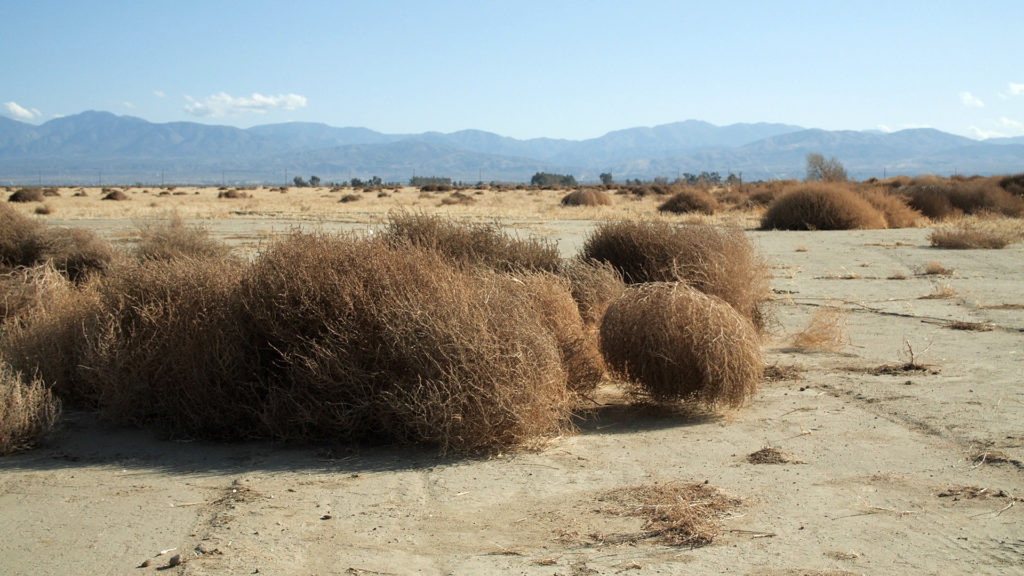 Tumbleweeds grow well in barren places like abandoned agricultural fields, vacant lots or the side of the road, where they can tumble unobstructed and there’s no grass, which their seedlings can’t compete with.

“Grass has nutritive tissue — what bread is made from — to sustain the seedling until it gets its leaves up, while the tumbleweed does not,” said Ayres. “Also, many grasses germinate in the fall and are already up and thick by the time the tumbleweed germinates.”

Tumbleweeds start out as any plant, attached to the soil. Seedlings, which look like blades of grass with a bright pink stem, sprout at the end of the winter. 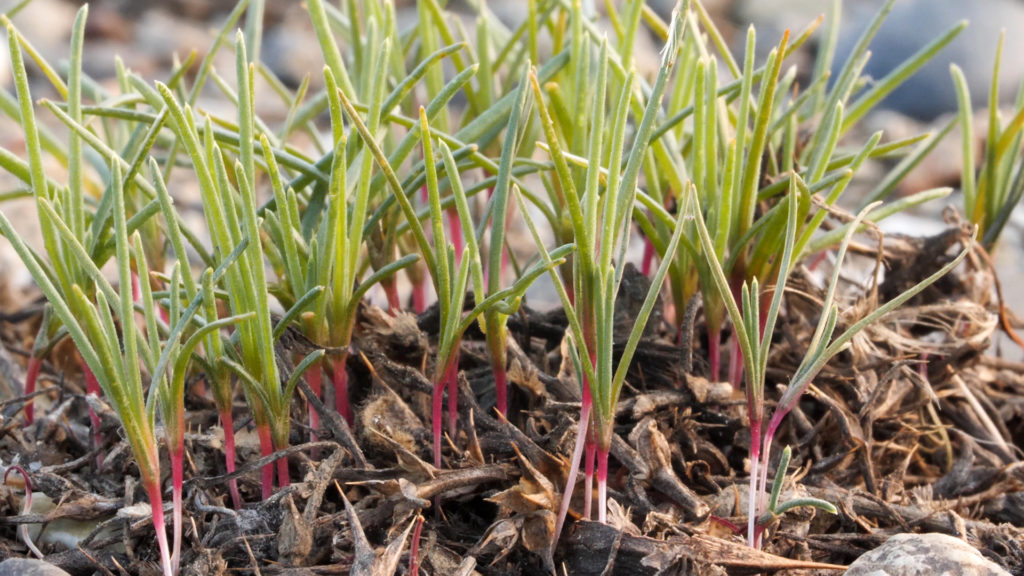 By summer, Russian thistle plants take on their round shape and grow white, yellow or pink flowers between thorny leaves. Inside each flower, a fruit with a single seed develops.

Other plants attract animals with sweet, tasty fruits, and get them to carry away their seeds in their stomachs and disperse them when they defecate.

Starting in late fall, they dry out and die, their seeds nestled between prickly dried leaves. Gusts of wind easily break dead tumbleweeds from their roots. A microscopic layer of cells at the base of the plant — called the abscission layer — makes a clean break possible and the plants roll away, spreading their seeds. When the rains come, an embryo coiled up inside each seed sprouts. 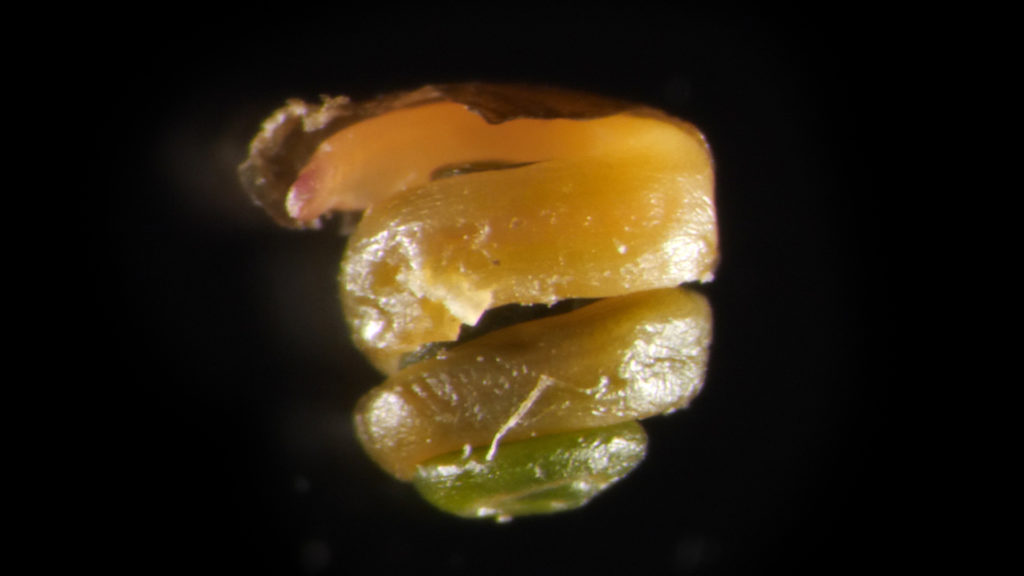 Each tumbleweed seed contains an embryo like this one. When it gets a little water, the embryo will uncoil and grow into the soil. Photo By Josh Cassidy/KQED

Tumbleweeds cause a host of problems in California, where they’re found throughout the state. In places like the southern San Joaquin Valley they can grow to be more than 6 feet tall, said Pitcairn.

“Unsuspecting motorists tend to swerve when a 6-foot plant comes tumbling across the road,” he said, “and many times end up in an accident.”

To prevent this from happening, California Department of Transportation crews use pitchforks to pluck tumbleweeds from the ground and toss them into large compactor trash trucks, said Cathryne Bruce-Johnson, Caltrans public information officer in San Diego.

Tumbleweeds can also pile up against buildings and become a fire hazard. That’s what happened the morning of April 16 in Victorville, northeast of Los Angeles, when 60 mph winds pushed hundreds of them into a neighborhood that borders undeveloped land in the Mojave Desert.

Tumbleweeds piled up so high that they reached the second floors and blocked the entrances to about 100 homes, and also covered the baseball diamond at a nearby park, she said. It took 36 city workers well into the night to clear them out.

In many western states, Russian thistle is an agricultural weed and farmers have to spray it when it grows among their crops. That’s a bigger concern in Oregon, Washington and Idaho than in California, said Pitcairn. In California, tumbleweeds clog sprinklers and irrigation canals. And they also harbor agricultural pests when they’re green. 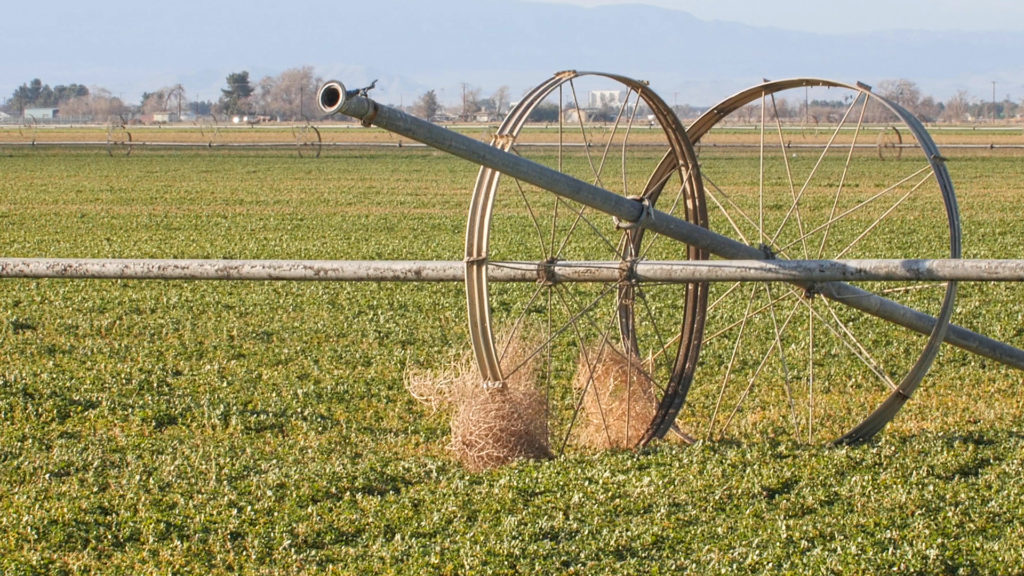 Tumbleweeds caught on a sprinkler system in Palmdale, California, in February. Photo By Josh Cassidy/KQED

In the spring and fall, the California Department of Food and Agriculture sprays insecticides on green Russian thistle in the Central Valley and surrounding foothills to get rid of the beet leafhopper. The insect can transmit the curly top virus, which damages crops such as sugar beets, tomatoes, melons, cucumbers, peppers, squash, spinach and beans, said Pitcairn. Spraying costs several million dollars each year, which comes from fees paid by vegetable growers, he said.

The beet leafhopper lives in Russian thistle because it’s one of the few plants that stays green in the fall in the foothills of California’s Central Valley. 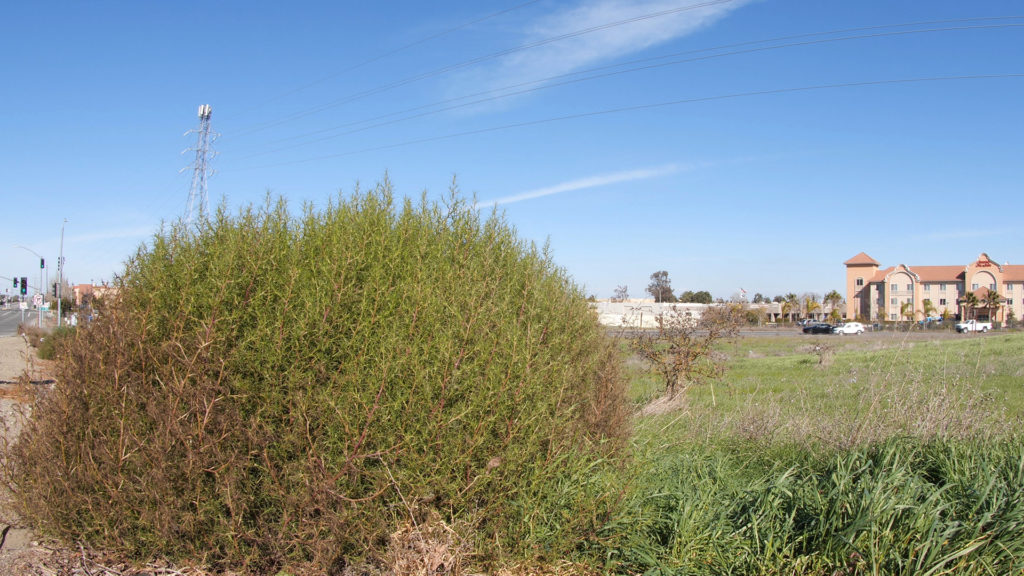 When it’s green, a Russian thistle plant, like this one in Woodland, California, can harbor the beet leafhopper, which carries a virus that damages sugar beets, tomatoes, peppers and other crops. Photo By Josh Cassidy/KQED

They lay eggs inside the plant tissue,” said Jennifer Willems, an environmental scientist at the Department of Food and Agriculture in Fresno. “They pierce the soft parts of the plant — the leaves — and suck the juice out.”

In the cities of Palmdale and Lancaster, tumbleweeds are such a big problem that Los Angeles County spends $100,000 to $150,000 yearly mowing and chipping dried-out Russian thistle in vacant lots and abandoned agricultural fields before they can tumble away, said Ariel Verayo, deputy agricultural commissioner at the county’s weed abatement division in Lancaster.

Tumbleweeds blow into alfalfa fields and need to be cleared out before the alfalfa is harvested. Alfalfa is cattle feed, and cows won’t eat prickly tumbleweeds, Verayo said.

One alfalfa farmer earlier this year found a creative use for tumbleweeds after clearing them off his field. He packed them into rectangular bales and told Verayo he planned to use the bales for bow and arrow target practice.

That’s one way of making sure tumbleweeds no longer tumble.

This report was produced by KQEDs Science. You can view the original report on its website.