Why the fattest bear is the picture of health

In her competition photo, Beadnose the bear is hunched down with her chin back, highlighting her thick shoulders (and, it seems, shooting the camera some side-eye). She’s one of the stars of Katmai National Park’s Fat Bear Week, a social media campaign that began in 2014. Each October, the park asks the public to vote on their favorite “fat bear.” This year, Beadnose brought in more than 7,000 votes to earn the title of official Fattest Bear.

By this time of year, all of the Alaska park’s brown bears are fat out of necessity. They’ve spent months preparing for the salmon to stop running upstream and the cold to set in, prompting their inevitable retreat into their dens. Over six months of hibernation, the bears will either lose a third of their body weight, almost entirely in fat, or they will perish. A bear without enough muffin top won’t make it through the winter.

The Fattest Bear of 2018 is… 409 Beadnose!
Her radiant rolls were deemed by #FatBearWeek voters to be this year’s most fabulous flab. What does the she win for all this hard work? Stronger chances of living through the winter.

For this reason, Beadnose is considered the pinnacle of bear fitness, weighing more than 600 pounds. According to research done with wild and captive bears, she’ll face no long-lasting negative health consequences for her massive weight gain.

But for humans in the U.S. and other Western countries, now heading into our holiday season of heavy eating, this kind of drastic weight gain can be damaging. It can bring on Type 2 diabetes, high blood pressure, abnormal cholesterol and increased risk of heart attacks and strokes. How are bears able to jiggle contentedly through the woods every fall and sleep off their extra pounds, while humans are constantly confronted with conflicting diet advice, new medical reports of the dangers of fat and the social stigma that accompanies weight?

Scientists say the bears’ annual respite makes them into the “metabolic magicians of the mammalian world.” As they gorge and then starve, their bodies and hormones keep track of the seasons, making them resilient to drastic changes in their environments. And someday, the secrets of these bears may help inform human health, too.

How bears go from skinny to fat in a summer

Bears emerge from hibernation in the spring at their thinnest. They pack on as much weight as possible before the following fall, adding hundreds of pounds of fat. This photo shows the same bear, Otis, in June and October of this year. Image by Katmai National Park.

Every summer in Alaska’s Katmai National Park, bears emerge from the woods. They perch at the edge of the Brooks River Falls and open their mouths.

Thousands of salmon migrate up the Brooks River to spawn each year. They fling themselves into the air, attempting to leap past the waterfall. The unluckiest among them do clear the falls, but not bear jaws. Online viewers can use the park’s series of webcams to watch the brown bears walk out of the trees in the spring, gangly limbs and shaggy fur in sharp relief.

“We can see it on the webcams, especially in the fall, where the bears are in the river gorging on salmon,” said Mike Fitz, a natural history educator with Explore.org. “They’ll walk up to the riverbank, and they’ll plop right down and take a nice long nap … then they’ll get right back up again and keep eating.”

In Alaska, the winters are dark and cold. An underweight bear can’t make it to spring. A bear that enters a hibernation den at 600 pounds can leave it 200 pounds lighter.

By the next October, the skinny bears from spring have gained so much weight that they nearly drag the ground with their bellies.

That’s how this year’s winner of Fat Bear Week, Beadnose, also known as Bear 409, captured the hearts of thousands of voters and millions of viewers. But accolades aside, her physique will hopefully see her safely through the cold months ahead.

How bears gorge and hibernate without getting sick 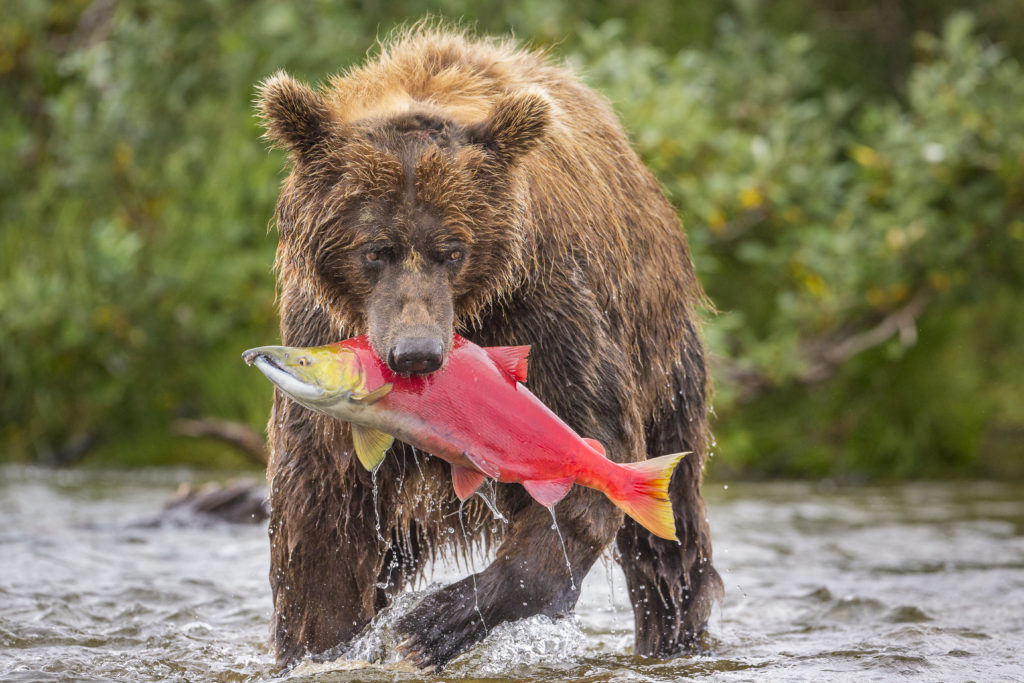 According to Heiko Jansen, an endocrinologist who works with captive bears at Washington State University, bears can conquer their annual bout of hefty eating thanks to two hormones: insulin, which helps cells use a sugar called glucose as fuel, and leptin, which helps control appetite.

With the onset of Type 2 diabetes, often associated with weight gain, human cells stop being able to use insulin effectively. This is called insulin resistance. Bears, on the other hand, keep their insulin usage at maximum capacity until right before hibernation, when they’ve reached their peak weight.

“Insulin allows your fat cells to get bigger and make more fat storage,” Jansen said. That’s what the bears need during this time of year. But when winter sets in and the bears are in hibernation, Jansen added, their muscles do become insulin resistant.

That makes sense for a situation in which you’re starving, like hibernation, Jansen said. One way to push glucose to the brain, a vital organ that relies on sugar as a major fuel, is to make the other tissues resist pulling it in.

Leptin is created by fat cells, and usually regulates weight gain. As fat cells grow, leptin production increases and usually signals a mammal’s brain to feel satiated when they’ve eaten enough. But during hyperphagia, the ravenous state that comes each fall, bears don’t respond to that feedback.

In mid- to late-October, when the bears are about to enter hibernation, researchers find that leptin flips on in a bear’s brain. “There’s a switch sometime in the fall,” Jansen said. That “switch” finally triggers the appetite suppression that the bears will need in hibernation.

Switching on and off their reactions to different hormones prepares the bears for their seasonal cycles.

Why humans can’t gorge and hibernate 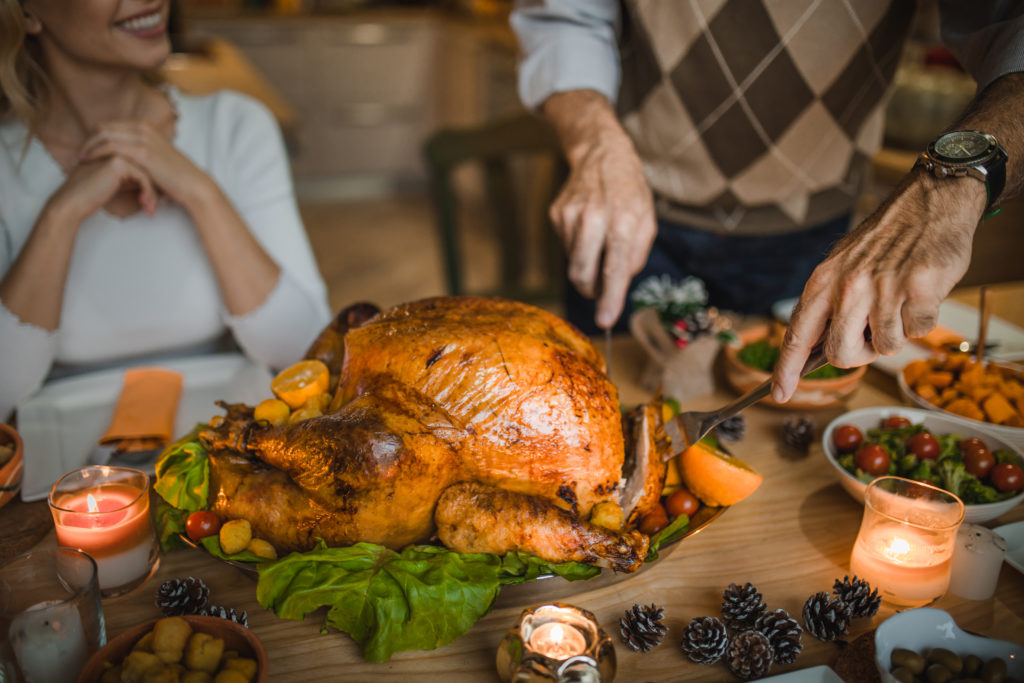 In many places around the world, humans have access to more calories than they use. Photo by Getty Images.

Many mammals have the same annual feasting cycle as bears, but humans, at least in modern times, are stuck in the heavier phase, said Dr. Sun Kim, an endocrinologist with Stanford University.

In many places around the world, humans have access to more calories than they use: “We’re built to store calories and store food. At a time of a famine, individuals who stored the most fat potentially could survive the longest,” Kim said.

So while bears continue to experience the same feast and famine conditions as they evolved in, Kim said that for humans, “there’s never a break.” As we gain weight, she said, “some of the exact same hormone changes happen in humans, but it’s not built into our cycle to go into a phase where our metabolism is much lower, and we can use up the fuel we’ve built up.”

During hibernation, brown bears like Beadnose reduce their energy consumption by around 75 percent. Their heartbeats slow, and they move as little as possible. Humans, on the other hand, work year-round, and we eat year-round, too.

Bears live very different lives from humans, both Jansen and Kim said. But reversing hormone sensitivities isn’t unheard of our species. Extreme weight gain for humans can result in insulin resistance and eventually longer-term consequences like heart disease, cancer and diabetes, according to Kim. But when people lose weight, their tissues can start to recover insulin sensitivity.

Several studies have found that fasting and weight loss, even from bariatric surgery, can actually reverse Type 2 diabetes symptoms, at least for a period of several months. There might be positive effects on high blood pressure and cholesterol disorders, as well. “There is very good evidence that losing the extra fat will improve these diseases,” Kim said.

According to Kim, it’s long-term weight gain that leads to serious health consequences for humans. Bears might be healthy not despite, but because of their bodies’ careful preparations for the swing between periods of extreme plenty and extreme scarcity, she added.

These comparisons between human and bear health remain an emerging field, and as such, there have been hiccups. In 2015, a highly publicized study on bear metabolism and hibernation was retracted after one scientist was found to have falsified data.

“There was money behind these studies,” Jansen said, “and you can imagine it’s not easy to get funding for bear studies. It all sort of got thrown under the bus.”

But Jansen and other researchers on the project, who say that their results still hold true despite one person’s data manipulation, aren’t giving up.

As it stands, though, Kim said, the similarities and differences between humans and bears aren’t well enough understood — don’t rely on the bears for diet advice. It’s always safer to talk to a human doctor.

Left: Scientists say the bears’ annual hibernation makes them into the “metabolic magicians of the mammalian world.” And someday, the secrets of these bears may help inform human health, too. Video by Vicky Stein