Why you sleep lousy on vacation

The first night in a new place often feels lousy, and neuroscientists at Brown University may have discovered why. They show that half of a person’s brain remains active during the first night of sleeping in an unfamiliar location. This brain activity corresponds with a heightened sense of awareness on one side of the body, which may serve as a night watch for spotting danger when a person is sleeping.

“We show that one brain hemisphere shows wakefulness, and the other hemisphere shows a deep sleep,” said Masako Tamaki, an experimental psychologist at Brown. “When people struggle with first-night effects, it may be because we don’t know whether the environment is safe for deep sleep in both hemispheres.”

Humans aren’t the first animals to leave on one brain hemisphere while resting, which is known as unihemispheric sleep. Dolphins do it. Birds do it. And in both cases, scientists suspect the behavior is a defense mechanism against predators.

Tamaki and her colleagues made this discovery in humans by conducting three sleep experiments. The first test monitored sleep cycles in 11 people, with a specific focus on slow-wave brain activity. Slow waves appear during the deepest stage of non-rapid eye movement (REM) sleep. They’re great marker for when a person is truly conked out.

The team made the usual measurements for a sleep study — brain waves, blood oxygen levels, heart rate, breathing, eye movements and leg movements — but peered into the mind and recorded activity in multiple parts of the brain with two different tools. One gives a fuzzy picture, while the other is sharper. They used functional MRI, which measures broad changes in blood flow, as well as magnetoencephalography — a scanner that detects electrical nerve signals on a millisecond-by-millisecond basis.

During the first night of sleep in a new place but not the second, slow wave activity dampened in all 11 subjects, suggesting their sleep was less deep. But, this reduction only occurred in the left brain hemispheres of these subjects, specifically in a collection of neural circuits known as the default-mode network. 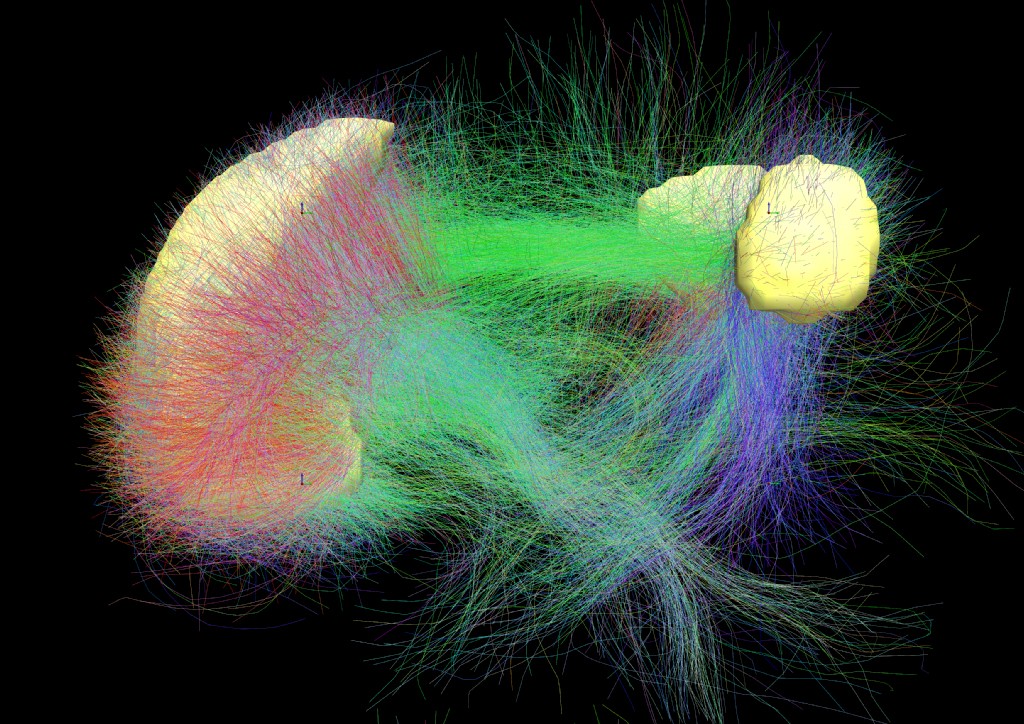 The brain and body are split in half, meaning the left brain hemisphere controls the right side of the body and vice versa. So if half the mind remains alert, does the same apply to half the body?

Yes! In a second experiment with 13 new subjects, the researchers played an annoying audio tone among a drumline of background tones — but into one ear at a time. The night-watch (left) hemisphere exhibited a sharper response to the tone when it was played in the right ear. In contrast, when the sound blared in the other ear, the right brain hemisphere seemed to ignore it. Again, this trend only occurred on the first night in a new place.

This alertness translates into swifter reflexes too. In a third experiment, the researchers told a new set of 11 subjects to tap their fingers if they noticed the annoying tone. On the first night in a new place, people tapped more readily when the tone played in the right ear and bothered the night-watch hemisphere. They also reacted twice as fast and were more likely to wake up altogether.

But wait, hold on. What if the subjects merely became used to the pesky tone between the first night and the second night?

Of the 35 adults tested in the study, all but three were right-handed. A larger group size would be needed to determine if the night-watch hemisphere is always the left side of the brain, or if it switches with handedness.

Some insomniacs experience a reversed version of the first-night effect, where they sleep better when exposed to a new environment. Plus, sleep solidifies memories and is important for learning, so Tamaki’s team plans to investigate whether frequent travelers suffer from temporary learning problems.

The study is available today in the journal Current Biology.

Left: People keep half of their brain online when sleeping in a new place, according to a new study from Brown University. Photo by Superstock