Will you die prematurely? This blood test may contain the answer

A blood test claims to provide more information on if, how and why a healthy person will die in the next decade.

Two things in life are ultimately certain: the day you’re born and the day you die. We know one, and the other drives many of our lifestyle choices, even though it’s hard to pinpoint the exact date that we’ll expire.

But what if you could narrow a person’s death date to a precise window? In a study published today in the journal Cell Systems, computational biologists suggest that a simple blood test can tell if an otherwise healthy person is likely to die from pneumonia or sepsis within a decade.

We made the initial discovery of these mortality biomarkers 1.5 years ago, said Johannes Kettunen, who studies “metabonomics” with the University of Oulu and the National Institute for Health and Welfare in Finland. Metabonomics is economics for the human metabolism.

Metabonomicists try to quantify the compounds consumed and produced by our body’s cells. To do so, researchers like Kettunen comb metabolic data from thousands of patients over long periods of time, in order to discern the evolution of our human soup.

In 2011, Kettunen and his colleagues examined blood samples from 10,000 Estonian and 7,000 Finnish subjects, among which 684 patients had died in a five-year follow-up period. They were searching for biomarkers in the samples that might have been an indicator for death, and they found one. A chemical process and byproduct of inflammation, called glycoprotein acetylation (GlycA), predicted whether a person would die from cancer, cardiovascular disease and nonvascular disease. These trends held true even when subtracting for factors like age, weight, smoking, cholesterol levels and preexisting conditions like diabetes and cancer.

“People with a biomarker score in the top 20 percent had a risk of dying within five years that was 19 times greater than that of individuals with a score in the bottom 20 percent (288 versus 15 deaths),” Kettunen wrote in PLOS Medicine.

Yet this information isn’t very useful unless scientists know why these deaths are linked to GlycA. Skeptics might say, “If you look at a large enough group, I’m sure some biological feature will connect their experience.”

This week, Kettunen and his colleague Michael Inouye, a human genomicist at the University of Melbourne in Australia, are back with a sequel. They’ve crunched the data from the original Finnish group as well as a new cohort of 3,500 young Finns that have been monitored since 1980.

By looking at how human genes respond in folks with a spectrum of GlycA levels, the researchers conclude that those with persistently high GlycA exist in a constant state of inflammation. It’s as if they’re fighting a virus or bacterium that isn’t there. Their bodies switch on the production of infection-fighting compounds, called cytokines, and they call upon immune cells — called neutrophils — that typically battle infections.

Chronic inflammation wears at a person’s body and can predispose people to catching infections. Akin to their results from 2011, the researchers found that elevated GlycA levels increased a person’s chances of being hospitalized with or dying from fatal infections. Overall, GlycA blood markers can predict death from infection up to 14 years in the future. 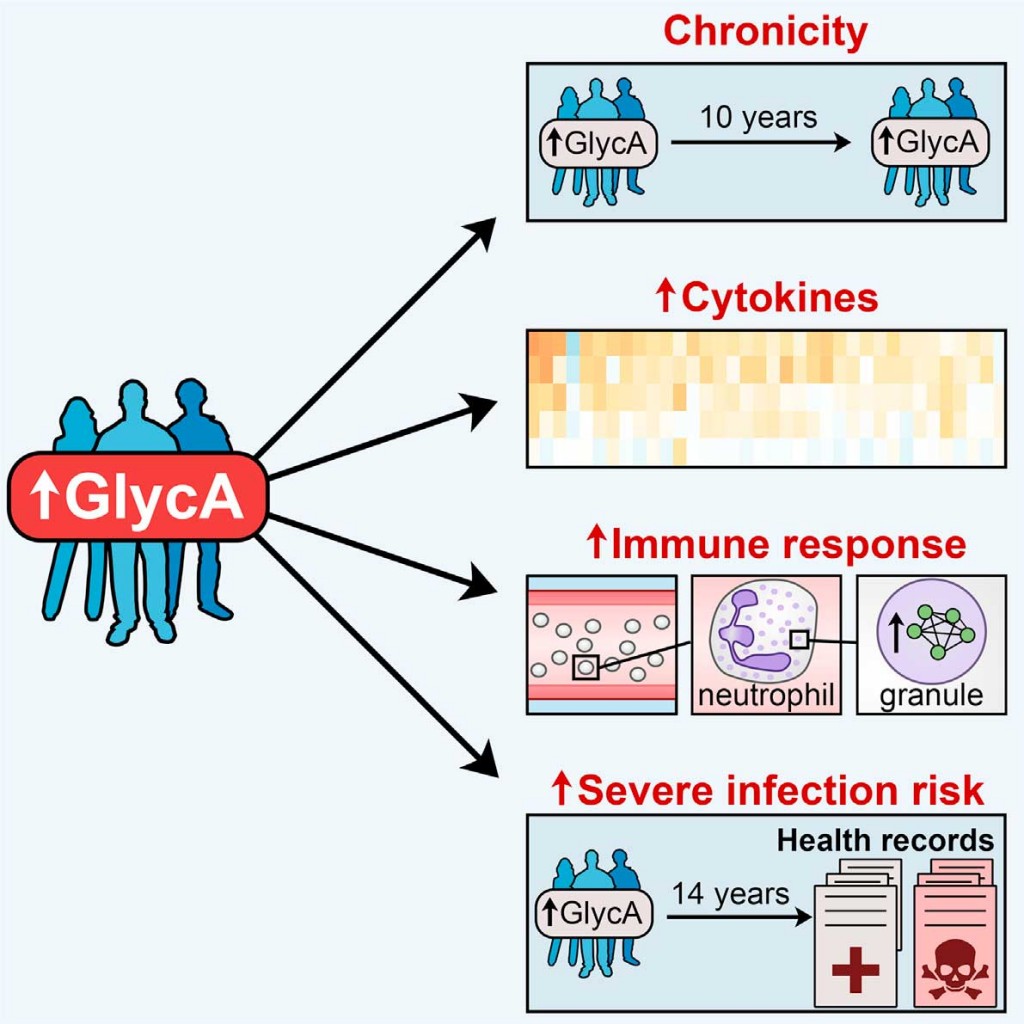 This schematic summary of the investigation into the biology of GlycA, a known biomarker for short-term mortality. It reveals GlycA’s long-term behavior in apparently healthy patients. GlycA levels can be stable for >10 years and are associated with chronic low-grade inflammation. Accordingly, GlycA predicts death from infection up to 14 years in the future. Illustration by Ritchie et al. Cell Systems, 2015

Kettunen suspects high GlycA levels are caused by a low-grade, runaway inflammatory response, but it’s possible that the condition results from a hard-to-detect infection by a virus or bacteria.

Clearing up the mystery behind the GlycA risk could be valuable not only for addressing our morbid curiosity, but also from a public health perspective. However, based on these two studies, it is hard to assign a number on how many people in the general population might have elevated GlycA, Kettunen said.

“We want to short-circuit that risk, and to do that we need to understand what this blood biomarker of disease is actually telling us,” Michael Inouye said in a statement.

But a person’s ability to learn their GlycA profile raises an ethical question, since there’s no known treatment for tweaking it.

“If we can find something that also lowers the health risks indicated by GlycA, then it may be useful to take. Until then, I think it is better not knowing,” Kettunen said.

Left: Higher levels of a set of blood markers correlate with premature death, and scientists may have figured out why. People Photo by JGI/Jamie Grill/via Getty Images

Virus relief bill remains up in air as negotiations resume