Will Your City Be Underwater? There’s a Map for That 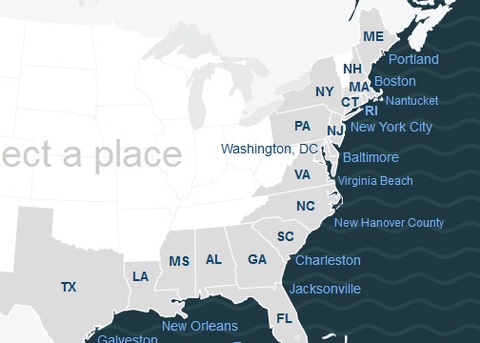 Click on the map above for an interactive version.

As many as 3.7 million U.S. residents in 2,150 coastal areas could be battered by damaging floods caused by global warming-induced storm surges, according to a new report published Wednesday in the journal Environment Research Letters. Sea levels could rise as much as 19 inches by 2050, according to what the report calls “mid-range projections.”

The team used data from the U.S. Geological Survey to map all areas along the continental U.S. coastline containing homes that lie within one to 10 feet from the water level at high tide. Previous estimates only looked at an area’s elevation above sea level, not at the area’s elevation relative to high tide, which underestimated the impact, said Benjamin Strauss, lead author and director of Climate Central’s Program on Sea Level Rise. Climate Central is the nonprofit organization behind the report.

The map shows the areas at risk of flooding with every foot of sea level rise. Move the slider bar at the left to increase the sea level rise, and the areas on the map that are subject to being flooded or entirely underwater grow. As the bar moves, you can watch the population, number of homes and acres of land in danger swell in size. The map also shows the likelihood for each decade that sea level rise plus storm surge plus tide will reach a certain threshold.

Florida, Louisiana, California, New York and New Jersey have the largest populations in the flood zone. Among those, Florida has the highest population density in harm’s way, Strauss said.

The analysis does not take into account protection measures such as sea walls and levees. Strauss also cautioned that the map is better at predicting threat to large areas than at detailing the risk to specific homes. From Climate Central’s website:

“Caution is therefore advised in drawing any conclusions about individual points or addresses on the Surging Seas map. However, errors should mostly cancel out when averaged across larger areas, so greatly more confidence can be placed in the statistics presented for cities, counties and states. This is analogous to how a baseball player’s career batting average characterizes his skill much better than his performance in just one game (which is like dataset performance at just one address).”

We’ll hear more from Strauss in an interview with Ray Suarez on tonight’s NewsHour broadcast.

So where does your city, town, or county fall on the map? Tell us what you discovered with the search tool.
Tweet to @newshour