Wireless brain implant allows paralyzed woman to communicate, but is it safe?

SAN DIEGO—A wireless device that decodes brain waves has enabled a woman paralyzed by locked-in syndrome to communicate from the comfort of her home, researchers announced this week at the annual meeting of the Society for Neuroscience.

The 59-year-old patient, who prefers to remain anonymous but goes by the initials HB, is “trapped” inside her own body, with full mental acuity but completely paralyzed by a disease that struck in 2008 and attacked the neurons that make her muscles move. Unable to breathe on her own, a tube in her neck pumps air into her lungs and she requires round-the-clock assistance from caretakers. Thanks to the latest advance in brain–computer interfaces, however, HB has at least regained some ability to communicate.

The new wireless device enables her to select letters on a computer screen using her mind alone, spelling out words at a rate of one letter every 56 seconds, to share her thoughts.

“This is a significant achievement. Other attempts on such an advanced case have failed,” says neuroscientist Andrew Schwartz of the University of Pittsburgh, who was not involved in the study, published in

HB’s mind is intact and the part of her brain that controls her bodily movements operates perfectly, but the signals from her brain no longer reach her muscles because the motor neurons that relay them have been damaged by amyotrophic lateral sclerosis (ALS), says neuroscientist Erick Aarnoutse, who designed the new device and was responsible for the technical aspects of the research. He is part of a team of physicians and scientists led by neuroscientist Nick Ramsey at Utrecht University in the Netherlands. Previously, the only way HB could communicate was via a system that uses an infrared camera to track her eye movements. But the device is awkward to set up and use for someone who cannot move, and it does not function well in many situations, such as in bright sunlight.

Devices that couple neural activity to computers have been used experimentally before to help patients with a range of neurological disorders, including locked-in syndrome. In pioneering work in 1998 neurologist Phillip Kennedy, of Neural Signals, Inc., implanted an array of electrodes into a patient’s brain who was paralyzed by a stroke to control signals in an on-off manner, and in 2015 a team of researchers led by neuroscientist Leigh Hochberg of Brown University implanted a 96-channel electrode array into the cerebral cortex of a 58-year-old woman with locked-in syndrome. Those brain implants helped patients communicate by enabling them to select words displayed on a computer screen, and similar tech has helped patients accomplish other tasks as well.

Schwartz’s team at Pitt recently demonstrated that a paralyzed man could use a robotic arm controlled by electrodes implanted in the man’s cerebral cortex to shake hands with Pres. Barack Obama. But surgically implanting electrodes into the brain carries inherent risks.

“Anytime there is a wire penetrating the skin there is risk of infection,” Schwartz says, and previous attempts at brain–computer interfaces could only be performed in the laboratory because of the bulky instrumentation required. “This new study is an advance because the implant uses wireless communication with the computer. It is really important to bring this capability home, and they have done that.”

For HB, Aarnoutse and his collaborators created a simple, minimally invasive implant that she can use at home or outside to communicate using a familiar computer notebook. To achieve this, doctors lifted a small flap of her scalp in surgery and drilled two finger-size holes through her skull. Then they slipped a thin plastic strip, which looks something like cellophane tape with four tiny dots on it, through the holes to rest on the surface of the brain. The four spots are miniature electrodes that do not penetrate brain tissue, but because they are beneath the skull, they make good electrical contact with the brain to record brain waves with high fidelity. 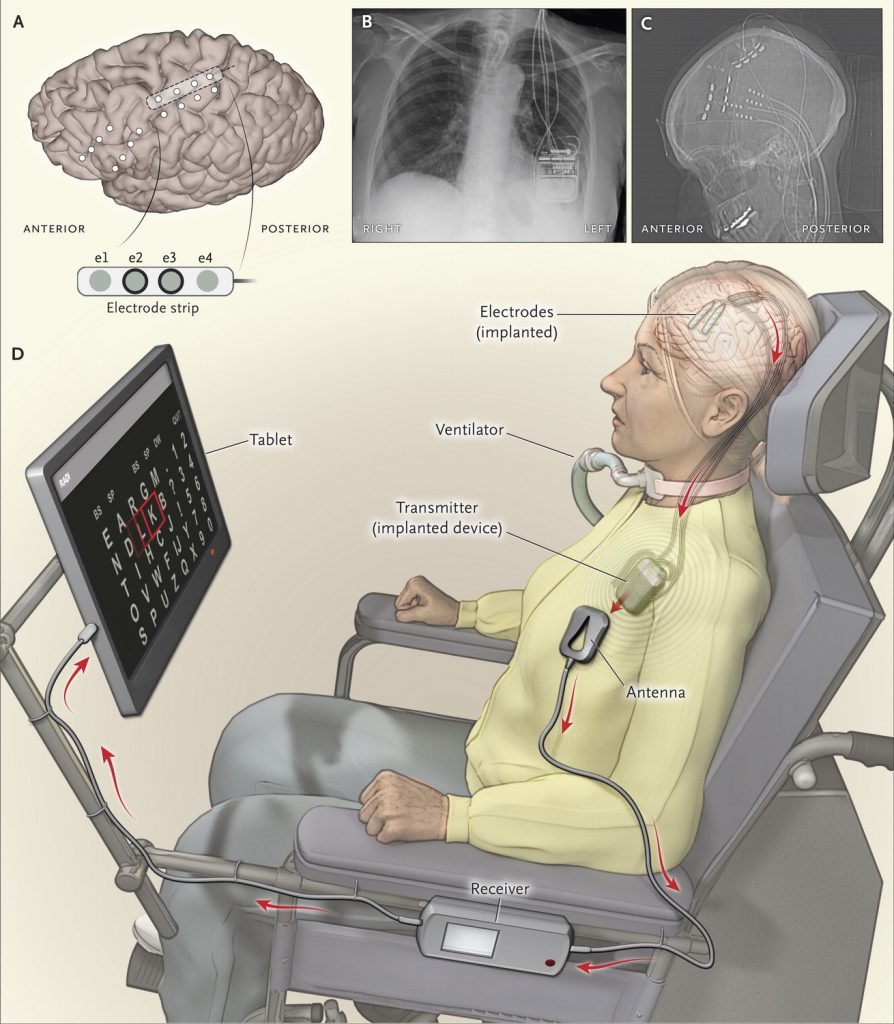 A new brain-computer interface (A, C) that connects to an electronic package in the chest (B) enables HB to select letters on a computer screen using her mind alone, spelling out words at a rate of one letter every 56 seconds, to share her thoughts in this artist’s impression (D). Photo by The New England Journal of Medicine 2016

The surgeons then threaded tiny wires from the electrode under the skin to a small electronic control device that was implanted in HB’s chest. The device, made by the biotech company Medtronic, communicates wirelessly by a radio transmitter to an ordinary tablet computer. (Medtronic provided partial support for the research, and one of the study’s authors is employed at the company, although the study states he was not involved in interpreting the results.)

Surgeons placed the electrodes over the part of the brain’s motor cortex that becomes activated when HB imagines closing her fingers. Analyzing the brain wave patterns, the researchers observed a simple but reliable pattern. Every time she imagined pinching her fingers, the power of certain frequencies of brain waves abruptly changed, as low-frequency “beta” brainwaves abruptly ceased and higher-frequency “gamma” brain waves whipped up.

By measuring the ratio of gamma- to beta-wave power in ongoing brain waves sweeping through HB’s motor cortex, the computer could detect when she was imagining closing her fingers. In this way HB quickly learned to operate a cursor in a video game, mastering that task only two days after the surgery. Next the scientists presented her with an alphabet arrayed in rows and columns on a computer tablet. As the display swept over individual letters in sequence, the woman imagined selecting the appropriate letter as if she were clicking a mouse.

The technology is not without controversy, however. Some experts believe that only noninvasive methods should be used to help people with locked-in syndrome communicate, for example by recording brain waves from scalp electrodes.

“Implantations like the one reported here may carry an unknown risk for advanced ALS patients,” says Niels Birbaumer, an expert in brain–computer interfaces at Tübingen University in Germany who was not involved in the study.

Recording brain waves through the skull, however, currently lacks the sensitivity needed to tap into the neural circuits that control fine voluntary movements. Moreover, that approach is not a practical solution, Aarnoutse says, because it takes a team of highly specialized technicians to attach the electrodes to the electroencephalography (EEG) cap and operate an EEG recording station. This is beyond the capabilities of most caretakers that assist people living with locked-in syndrome. Furthermore, the EEG cap, which looks like a swimming cap with dozens of wires sprouting from it, is something patients would likely never use in their everyday lives.

“It would inhibit their interaction with others, and they would never use it outside their home,” Aarnoutse says.

Still, some experts say the wireless new device may not justify the risks. “One to two letters per minute is not justifiable [for doing a craniotomy] unless they can improve it,” Kennedy says.

Indeed, when HB was first learning to use the device, she told Aarnoutse, “Trying to communicate like this is like tacking a sailboat.”

But many patients with locked-in syndrome choose not to use ventilators to breathe when their disease reaches an advanced stage because they cannot communicate and they feel they are a burden on their loved ones, according Schwartz. Studies suggest that locked-in people can lead meaningful and productive lives if they can communicate in some way. “We need to do anything we can to help these people,” he says. “We are talking about life and death.”

Now, more than a year after the device was implanted, HB lives at home with her husband and one of her children, and she has gotten much faster at typing out her thoughts. Also, the device works outdoors in the sunshine where her eye tracker fails. “She’s happy,” Aarnoutse says. “The ability to communicate has given her more freedom and made her more independent.”

Scientific American editor Tanya Lewis contributed reporting. R. Douglas Fields, Ph.D., is a neuroscientist and an adjunct professor at the University of Maryland, College Park. He is author of Why We Snap, about the neuroscience of sudden aggression, and The Other Brain, about glia. Fields serves on Scientific American Mind’s board of advisers. This article is reproduced with permission from Scientific American. It was first published on Nov. 17, 2016. Find the original story here.

Left: The new brain-computer interface enables HB to select letters on a computer screen using her mind alone, spelling out words at a rate of one letter every 56 seconds, to share her thoughts. Photo by Brain Center Rudolf Magnus, University Medical Center Utrecht