Spotting these auroras is nothing new — in fact, unlike on Earth, this atmospheric light show is constantly happening on Jupiter. But Hubble’s new recordings come as the Juno spacecraft is making its final approach toward the solar system’s largest planet, and scientists plan on using the tag team to explore how the sun and other radiation sources alter auroras.

“These auroras are very dramatic and among the most active I have ever seen,” Jonathan Nichols, a magnetosphere physicist at the University of Leicester, UK, said in a statement.

Nichols is the principal investigator of a project geared toward studying the auroras and solar wind, a zephyr of charged particles emitted by the sun. The collaborative effort pairs scientists from NASA and the European Space Agency with the goal of examining how these charged particles interact with Jupiter’s atmosphere and magnetic fields to create the northern lights. 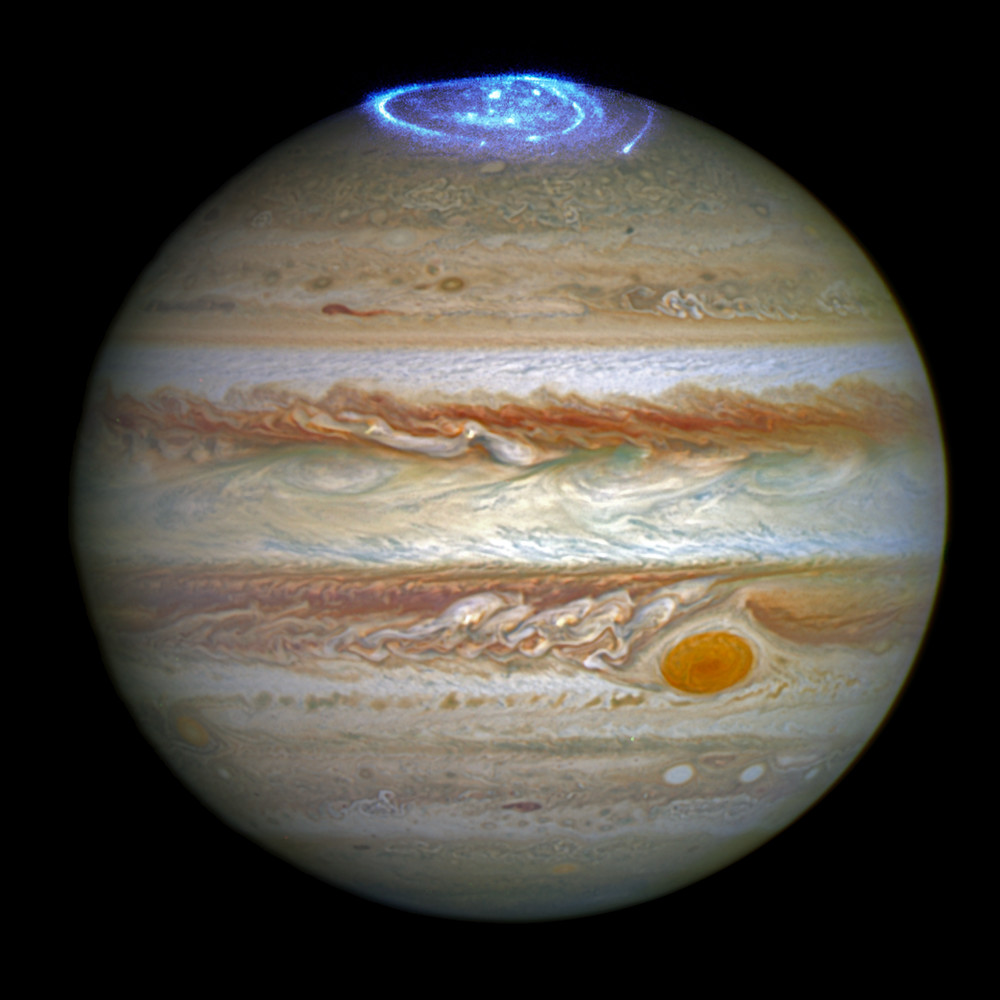 This image composite of Jupiter photo (taken in spring 2014) and the optical observations of its auroras in the ultraviolet, taken in 2016, both captured by the Hubble Space Telescope. Photo by NASA/European Space Agency

The Juno spacecraft is currently surfing the solar wind near Jupiter prior to its July 4 arrival at the planet. Juno is measuring the properties of the solar wind, as Hubble tracks the visual dynamics in myriad wavelengths of light. The new images show what Jupiter’s auroras look like in ultraviolet light, which is invisible to the naked eye. Hubble will snap new pictures of the auroras every day for close to a month.

“It almost seems as if Jupiter is throwing a firework party for the imminent arrival of Juno,” Nichols said.

Jupiter’s auroras match the planet’s size — the vivid flames cover an area larger than Earth. This light display is even more spectacular during a solar storm. Scientists based in London recently discovered that Jupiter’s X-ray auroras become “eight times brighter than normal and hundreds of times more energetic than Earth’s aurora borealis” during a solar storm.

“New insights into how Jupiter’s atmosphere is influenced by the Sun will help us characterize the atmospheres of exoplanets, giving us clues about whether a planet is likely to support life as we know it,” University College London astrophysicists Graziella Branduardi-Raymont told Astronomy Magazine in May.

Aside from emitting UV and X-ray light, the northern lights of Jupiter also paint the air in red, green and purple. The planet’s strong magnetic field — at times 20,000 times stronger than Earth’s — attracts charged particles not only from solar wind, but from those spewed by supervolcanic explosions on Io, its moon. The eruptions brighten the blue auroras on Jupiter, and the Hubble and Juno partnership aims to look deeper into the phenomenon.

The Juno spacecraft will spend 16 months orbiting the gas giant before ultimately plummeting into its massive clouds.