When did wolves become dogs? New research throws a bone into the debate

Scientists have long been divided over when, where and how many times wolves were domesticated into our beloved dogs.

Geneticists at Stony Brook University in New York turned the debate back on its head Tuesday with a new theory: Wolves were domesticated just once, between 36,900–41,500 years ago, a discovery that could change the historical record on our loyal canine friends and also helps us pinpoint when the split between European and Asian breeds began.

Before we get to the latest study, a little background:

Scientists tend to fall into one of three camps on when and where wolves turned into what we today consider domesticated dogs.

1. The “great taming” event happened 33,000 years ago in China, where modern dogs are the most diverse but also genetically closest to wolves.

But all agreed that, at some point, the original domestic canines split into what we now know as Western and Eastern dogs.

In June 2016, Oxford paleogenomicists Laurent Frantz and Greger Larson threw a bone into the debate with the theory that modern dogs actually had a dual origin — with canine domestication cropping up independently in Asia and in Europe.

The logical hypothesis was East Asian dogs invaded and wiped out indigenous European dogs — until Veeramah tried to replicate Frantz and Larson’s work.

Their position hinged upon a 4,800-year-old canine ear bone from Newgrange, Ireland. This Neolithic pooch had a genetic heritage more like modern Western dogs, but with traces of ancient East Asian dogs. The Irish dog’s DNA also showed signs of a genetic bottleneck, suggesting its forebearers had split from East Asian dogs around 6,400 to 14,000 years ago and headed west.

But there was a catch. The oldest known dog fossils in Western Europe and East Asia date back to around the same time: 15,000 and 12,500 years, respectively. So, domesticated pooches had already existed in Europe before the Irish pup’s parents migrated from Asia. The logical hypothesis was East Asian dogs invaded and wiped out indigenous European dogs — until Krishna R. Veeramah, a population geneticist at Stony Brook, and a team tried to replicate Frantz and Larson’s work.

“What we found were a few errors that the group made that pushed them towards this suggestion of two domestication events,” Veeramah said. “They accidentally included the same sample twice.”

Veeramah’s team opted to redo the analysis of the Irish dog’s DNA, but also include newly discovered skulls from Germany — one from the “Cherry Tree Cave” near Forcheim, the other from a site known as the “pit of bones” near Herxheim. 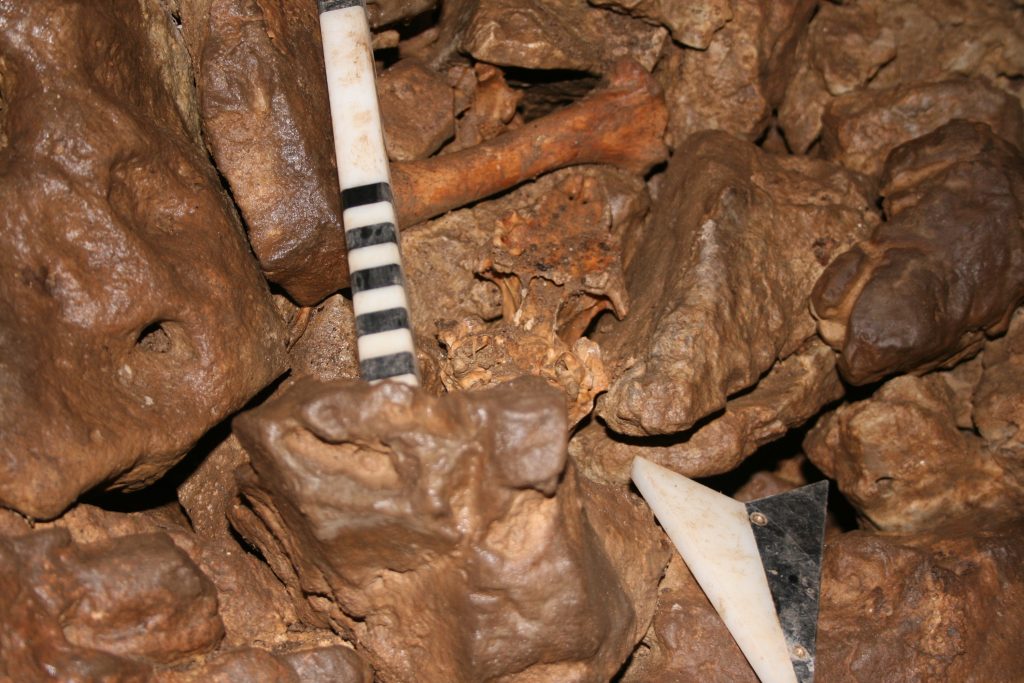 Both of these ancient German dogs had lived during the Neolithic, like the Irish pup, but at the beginning and end of the time period.

“That’s interesting because it was previously believed the replacement of European dogs happened during the Neolithic,” Veeramah said.

His team’s analysis of the dogs’ whole genomes suggested otherwise. All three dogs appear to hail from the same European lineage of dogs. Moreover, all of their maternal heritages carried similarities to that of the 15,000-year-old fossil from Western Europe.

By comparing the DNA from the three Neolithic dogs to that from a collection of ancient and modern canines from Europe and Asia, Veeramah predicted that Eastern and Western dogs likely split ways 20,000 years ago.

Frantz and Larson did not respond to multiple requests from the NewsHour for comment.

Veeramah agreed with Larson, to a certain degree. He said he wouldn’t be surprised if a future study found hard proof for dual domestication, but that current evidence doesn’t support it. He also expects an international collaboration, founded in 2013 by Larson, to find the final answer.

“I’m pretty sure in a couple of years, his project will have nailed down the timing and geographic origins,” Veeramah said. “Because they’re going to sequence a lot of samples that are much older than what we’re looking at, from East Asia, Central Asia and Europe.”

Left: A picture of the 5,000-year-old Late Neolithic dog skull from the Cherry Tree Cave near Forcheim, Germany, before it underwent whole genome sequencing. Photo by Amelie Scheu