One of the world’s most iconic astronomy sites, Puerto Rico’s giant Arecibo Observatory, may be facing the end of its era. The National Science Foundation (NSF), the primary funder of Arecibo—which is the largest existing radio telescope and was featured in the movies Contactand GoldenEye, among others—is holding public meetings on June 7 to “evaluate potential environmental effects of proposed changes to operations at Arecibo Observatory,” according to an NSF announcement.

Because those proposed changes include the option of shutting down the 305-meter dish telescope altogether, officials will likely get an earful about more than air quality and groundwater. Defenders of the observatory will have a chance to speak their minds at two meetings—at the San Juan DoubleTree Inn and the Puerto Rico Professional College of Engineers and Land Surveyors—and can submit comments in writing through June 23.

With the NSF’s budget essentially flat since 2010, the agency cannot afford to run all its telescopes indefinitely…
Since its completion in 1963 the storied telescope found fame for discoveries such as the first-ever planets outside the solar system in 1992 and the first indirect evidence of gravitational waves in 1974, a finding that earned its makers a Nobel Prize, among other landmark accomplishments.

But the beloved observatory now stands on a precarious threshold. The NSF has to balance the operations of new and expensive facilities such as the Atacama Large Millimeter/submillimeter Array in Chile against older ones like Arecibo while weighing federal scientific priorities and setting aside enough money for grants to individual scientists.

With the NSF’s budget essentially flat since 2010, the agency cannot afford to run all its telescopes indefinitely, continue building new ones and still pay the country’s scientists. But researchers who use Arecibo argue that it has a useful life of novel discoveries ahead of it, even if is not as shiny as the newcomers, especially in some areas where it makes a unique contribution.

The observatory’s latest announcement follows recommendations made by two committees associated with the NSF, in 2012 and earlier 2016, reevaluating the agency’s role in running the telescope and “significantly decreasing funding.” This year the NSF also did a “feasibility study” to map out various futures for Arecibo and asked potential partners to propose ways they could take over some telescope operations. The NSF currently funds Arecibo at $8.2 million a year, two thirds of the telescope’s total cost, with NASA kicking in the last third to bankroll the observatory’s study of near-Earth asteroids. But two NSF divisions—Astronomical Sciences and Atmospheric and Geospace Sciences—which split their cost equally, are reconsidering their roles. 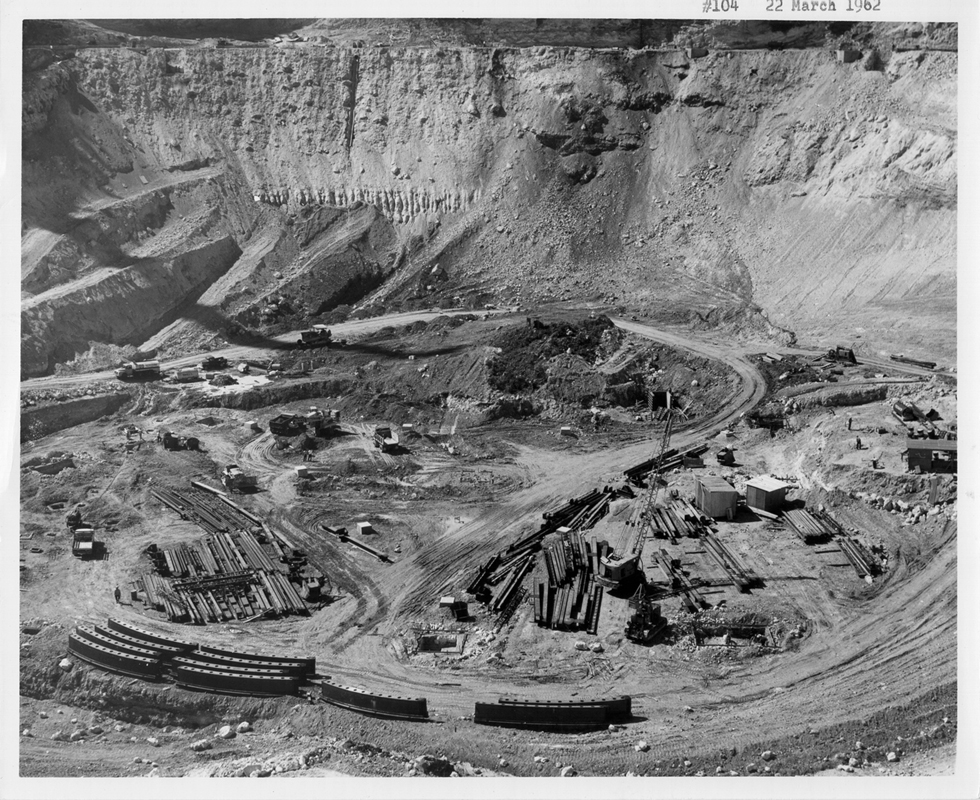 Construction of the Arecibo Radio Telescope ran from 1960 to 1963. Here is the site on March 22, 1962. Photo courtesy of the NAIC – Arecibo Observatory, a facility of the NSF

The “environmental impact statement,” for which the upcoming meetings seek public comment, will attempt to define the earthly effects of five different hypothetical scenarios, each involving a different financial commitment from the NSF. In one, everything would stay much the same. But the agency could also team up with “interested parties” who could help fund the telescope or other interested parties who want to run it as an educational facility.

More pessimistically, the NSF could mothball the site, shutting it down in such a way that it could restart (sometime in the future). Or it could dismantle the telescope altogether and restore the area to its natural state, as required by law if the agency fully divests itself of the observatory and closes it. Previous studies have said such a process could cost around $100 million—more than a decade’s worth of its current funding for telescope operations.

Jim Ulvestad, director of the NSF Division of Astronomical Sciences, says the agency is still investigating, not concluding. “No alternative has been selected at this juncture,” he says. And much consideration will go into the final financial decision, whatever it may be. Some outside the agency see writing on the wall.

“NSF is dead serious about offloading Arecibo funding to someone else—anyone else,” says Ellen Howell, a former staff scientist at Arecibo and now a faculty member at the Lunar and Planetary Laboratory (LPL) in Tucson, Arizona.

This is hardly the first time Arecibo’s future has felt precarious. A quick Google search will net you various “Save Arecibo!” campaigns from the 2007 era—for instance, after an NSF-commissioned report recommended decreasing the agency’s funding for the telescope from 2007’s $10.5 million to $4 million in 2011. Its current $8.2 million-a-year allowance is a compromise.

And the observatory has company in its current crisis. 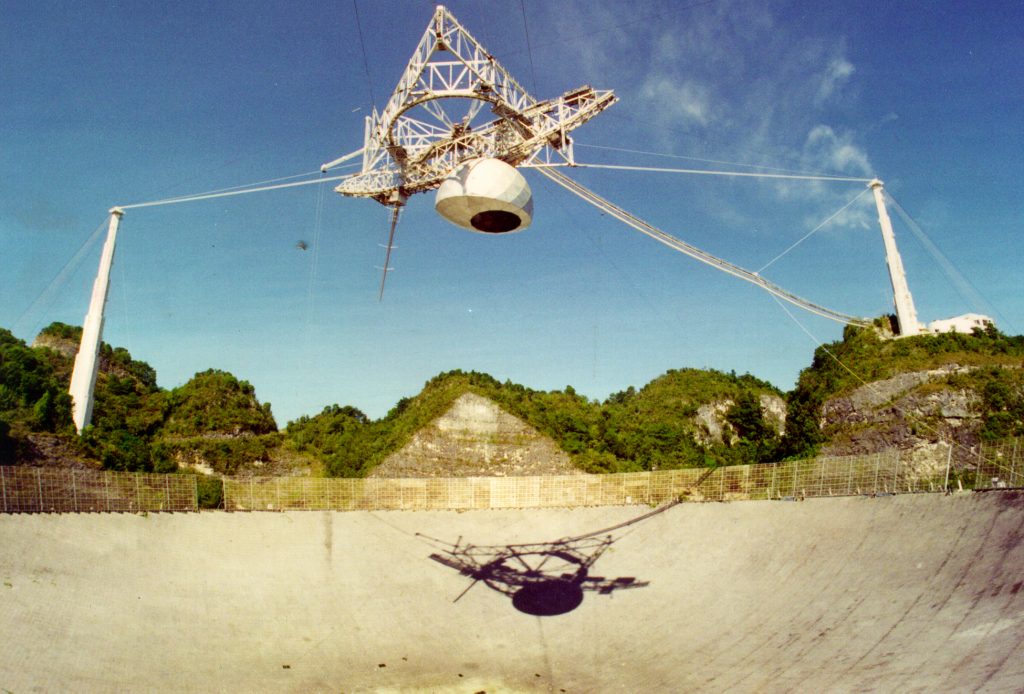 A 900-ton platform is suspended 450 feet above Arecibo’s primary reflector dish. The dome, which carries receivers, can move along arched tracks, expanding the observatory’s view of the sky. Photo courtesy of the NAIC – Arecibo Observatory, a facility of the NSF

The Green Bank Telescope in West Virginia, the Very Long Baseline Array spread across the country, and several older telescopes on Kitt Peak in Arizona are wading through similar budgetary muck, trying to work out new private partnerships (with NSF assistance) after the agency decided to cut their cords. And according to documents and e-mails obtained byThe Sydney Morning Herald, the Parkes radio telescope in Australia is facing similar funding shortfalls. A “likely recommendation,” according toThe Herald, will be that Parkes and another Australian facility “raise external funds by charging for access to the telescope facilities.”

Green Bank, Arecibo and Parkes are three of the world’s most powerful radio telescopes—historically open to scientists who successfully submit proposals to use them—and government-based financial problems may lead them all into eventual closure or into the arms of private interests, where whoever pays gets to choose what type of science is done.

Arecibo currently is used for radio astronomy, space and atmospheric science as well as radar studies of comets, asteroids and planets. These areas are brimming with potential for the observatory to make many exciting discoveries in the future, advocates say.

Xavier Siemens, an astronomer at the University of Wisconsin–Milwaukee, is especially excited about the possibility for using Arecibo to detect gravitational waves—ripples in spacetime—coming from supermassive black holes. Because it is the largest and most sensitive single-dish radio telescope in the world, Arecibo is one of the best instruments available for detecting pulsars, the fast-spinning remnants of dead, once-huge stars. Scientists like Siemens currently use Arecibo and the also-threatened Green Bank Telescope to find and monitor a network of pulsars they hope will help detect gravitational waves.

In addition to its scientific import, Arecibo also plays a concrete, down-to-earth role in the community.
Without Arecibo, he says, that search would be crippled. Although the Laser Interferometer Gravitational-Wave Observatory (LIGO), which announced the first detection of gravitational waves in February to much fanfare, will continue running, it catches different waves than pulsar studies such as Arecibo’s do.

“What’s really amazing to me is that in the wake of the discovery of gravitational waves, NSF is going to shut down the world’s most sensitive radio telescope and hinder the detection—the opening of the only other gravitational-wave window that we can open in the next few years,” he says. “It’s surreal.”

It may be surreal but Howell believes it is also realistic.

“I am afraid that NSF has already made up its collective mind to reduce their support to much less than the current $8 million per year or so to perhaps nothing,” Howell says. “I think this is an embarrassment after so many years of scientific achievements when so little could continue the productivity.”

Michael Nolan, now at the LPL, worked at Arecibo for 20 years and was director from 2008 to 2011. He claims the observatory used to have better friends in high places, specifically in the NSF’s Atmospheric and Geospace Sciences division. “The two main advocates are now retired, and it seems like that voice is, too,” he says. “The Astronomy division has seemed like managers rather than advocates for a long time, though, of course, I’m not privy to their internal discussions.”

And whereas the NSF’s deliberations have not yet resulted in a decision to back away from the observatory completely or at all, the delay of what may be inevitable is not doing the telescope any favors, Nolan argues. Arecibo’s leaders cannot ask new potential donors to make up for a specific shortfall because they do not know if or by how much the NSF might curb its aid.

Recalling his tenure at Arecibo, and the regular jeopardy it was in even back then, Nolan wishes the facility did not have to be so often rescued from the brink: “You know that line in The Incredibles?” he asks. “‘Sometimes I just want it to stay saved, you know? For a little bit.’”

In addition to its scientific import, Arecibo also plays a concrete, down-to-earth role in the community. An economy exists around the rural facility, which provides jobs to local residents and infuses the area with cash-dispensing visitors—both touristic and scientific. The environmental statement will also evaluate those human impacts.

If the NSF does decide to tighten the purse strings and no other organization steps up to fill the gap, the consequences will ripple across science and society, space and time. “If Arecibo has to close because NSF has other priorities, it will not be possible to bring it back anytime soon, when or if we come to our senses,” the LPL’s Howell says. She and many scientists would agree that an empty Arecibo site would be—as Jodie Foster says in Contact—an “awful waste of space.”

This article is reproduced with permission from Scientific American. It was first published on June 6, 2016. Find the original story here.