Forty-two years ago, archaeologists in Ethiopia unearthed fossilized bones belonging to one of humanity’s earliest known ancestors to walk upright. Known as the “Lucy” skeleton, it reshaped our understanding of human evolution, but no one has ever been able to explain how she died — until now.

Lucy likely died about 3.2 million years ago after tumbling 40 feet out of a tree, according to findings published Monday in the journal Nature. She hit the ground feet-first traveling 35 miles per hour, while stretching out her arms to break her fall.

John Kappelman, a University of Texas geologist who proposes the new hypothesis, called it ironic that the fossil that fueled debate about the role tree-climbing played in human evolution died falling out of one.

“Those adaptations that allowed them to move more effectively on the ground are not so good for climbing,” Kappelman told the PBS NewsHour. “It may have predisposed her to more frequent falls.”

Stop motion video depicts a hypothetical scenario for Lucy’s fall out of a tall tree and the
subsequent vertical deceleration event based on the patterning of the fractures. The first segment depicts about the last half of the fall from 7.4 m with a real time duration of 0.45 seconds, and the second segment shows a close-up of the last 2.2 m of the fall. Image by John Kappelman

Lucy, a member of the ancient hominin species Australopithecus afarensis, is arguably the most celebrated find in the history of evolutionary science. When she was found in 1974, her remains were remarkably intact. Her bones make up about 40 percent of a complete skeleton, providing scientists unique insights into how humans started to walk on two feet.

On the evolutionary timeline, Lucy lived about halfway between apes and humans, sharing characteristics with both. She had long arms like an ape, a protruding belly, a low forehead and the ability to navigate trees. She was small, probably smaller than her peers, weighing about 60 pounds and standing just 3 feet 6 inches tall. But despite her ape-like appearance, Lucy’s ankles, feet and pelvis placed her among the first species to exhibit the uniquely human trait of walking upright.

Kappelman has spent 30 years teaching students about Lucy, and reached his most recent conclusions by X-ray scanning the bone fragments. His team zeroed in on a four-part fracture in her right humerus, the bone that runs between the shoulder and the elbow. 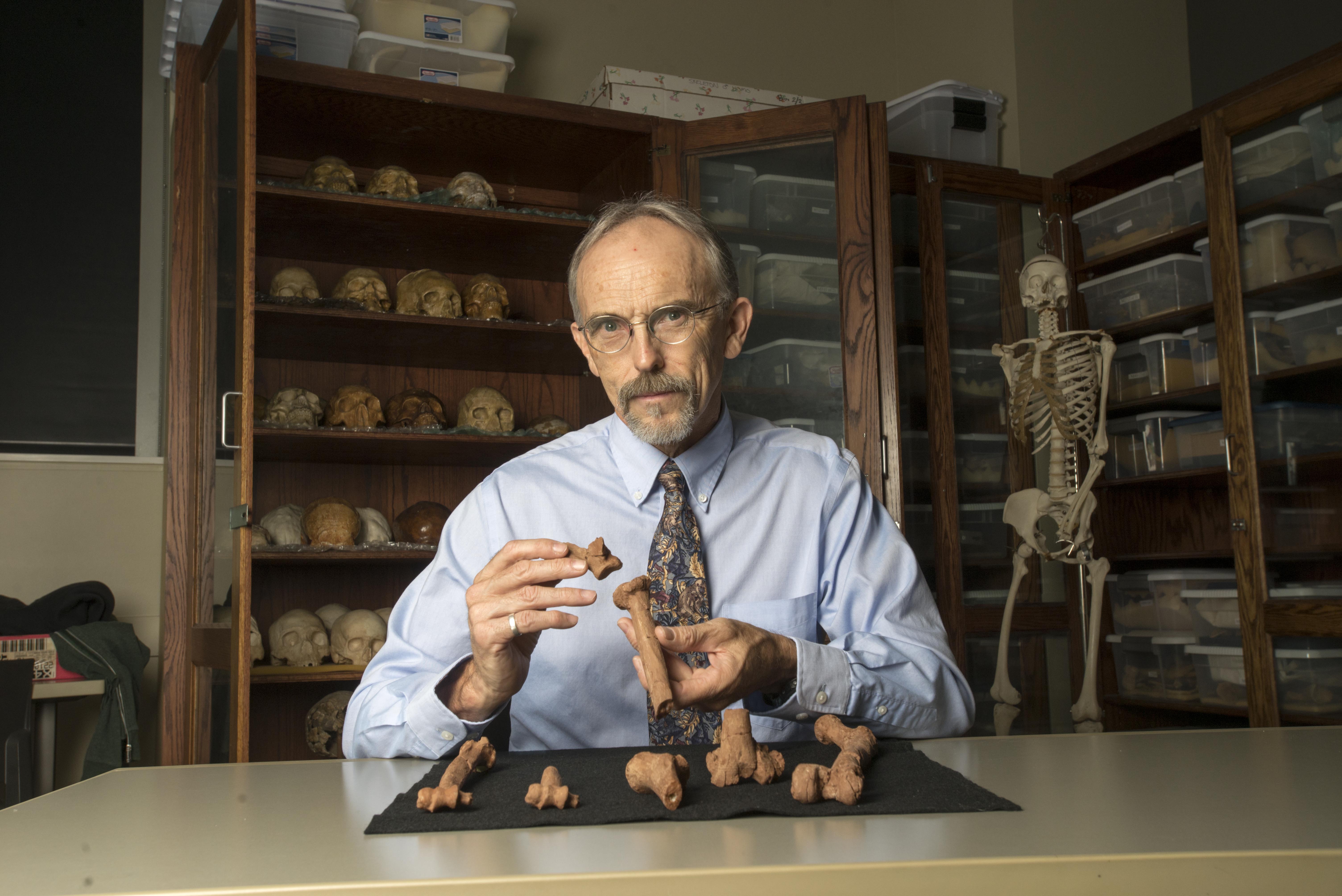 UT Austin professor John Kappelman with 3D printouts of Lucy’s skeleton illustrating the compressive fractures in her right humerus that she suffered at the time of her death 3.18 million years ago. Photo by Marsha Miller, UT Austin.

The scans were consistent with injuries seen in modern-day humans who fall from considerable heights. Plus, the team couldn’t find evidence of bone healing, suggesting the fractures occurred near the time of her death.

“She was trying to do her best to instinctively break her fall,” Kappelman said. “She was conscious when she hit, but death followed swiftly.”

The investigation may also explain exactly how Lucy fell. “It was probably a feet-first fracture,” Kappelman said. “The body hit right to left. We see that the right arm is more severely fractured than the left.” 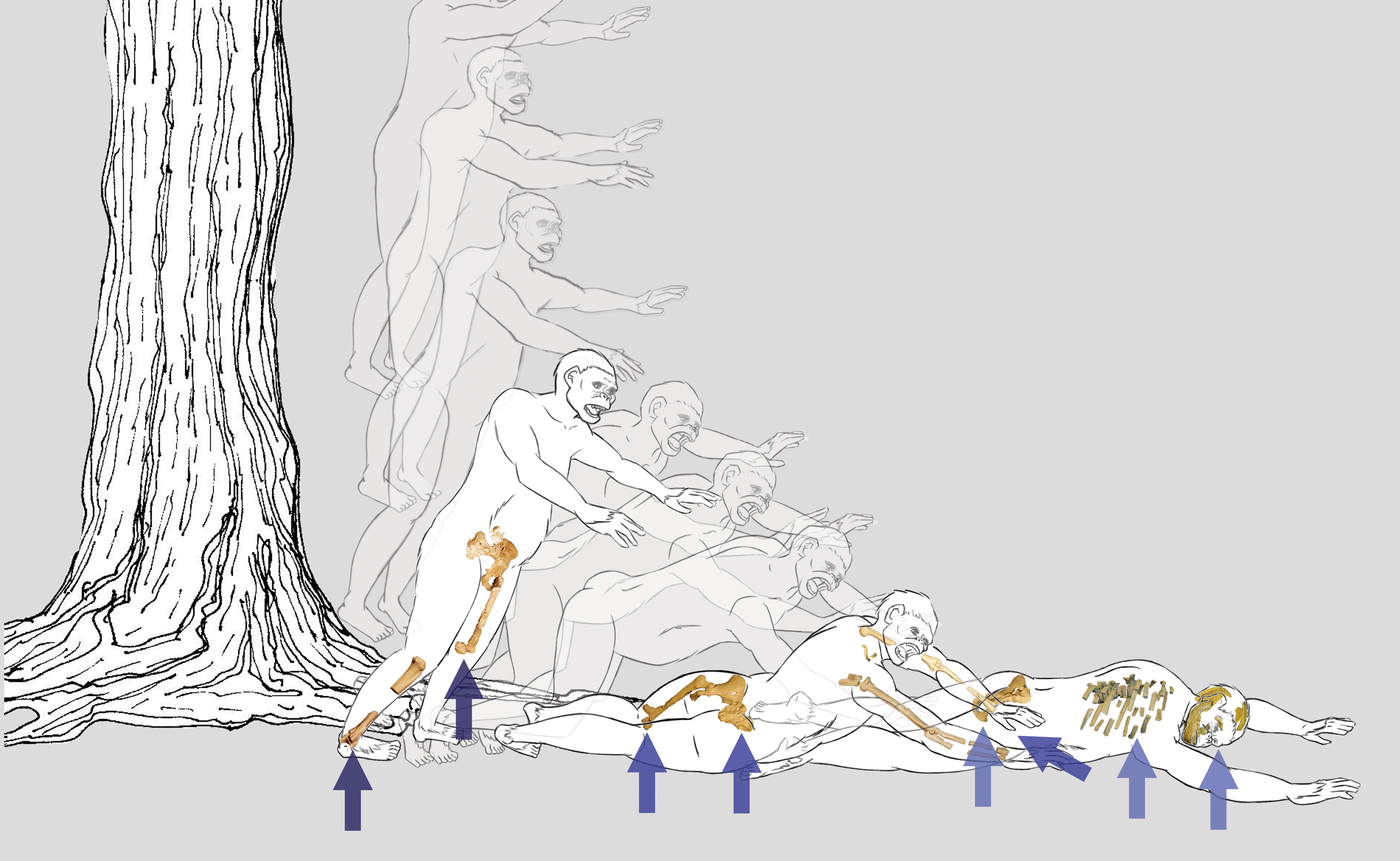 A hypothetical scenario for Lucy’s fall out of a tall tree and the subsequent vertical deceleration
event. Based on the severity and pattern of the fractures, the authors hypothesize a feet-first landing with the body pitching forward toward the right side. Photo by Valerie A. Lopez and John Kappelman

William Jungers, the chair of anatomy at Stony Brook University School of Medicine who wasn’t involved in the research, called Kappelman’s theory “plausible.”

“Nest-building is a common feature of our closest living relatives, the African apes,” Jungers said. “It is not a stretch to expect such behavior in an ancient hominin that was both terrestrial and arboreal.”