Lonesome George, a wizened Galapagos giant tortoise, was the last of his kind. When a researcher spotted the nearly five-foot-long reptile roaming Pinta Island in 1971, his species had been thought extinct for decades. During the 40 years that followed — until his death in 2012 — Lonesome George was believed to be the only Pinta giant tortoise on the planet.

Now, researchers are using the iconic tortoise’s genetic material along with DNA from another long-lived turtle, the Aldabra giant tortoise, to better understand what it takes to live a long life.

In a new study published Monday in Nature Ecology and Evolution, the researchers sequenced Lonesome George and his fellow giant tortoises’ genes to compare the common genetic links among other long-living animals — such as naked mole rats, bats, some species of whales and humans.

They found a set of genetic adaptations related to cancer suppression, DNA repair and inflammation, laying the groundwork for future experiments into the mechanics of aging.

With the new insight into turtle biology, the researchers also hope this analysis might help prevent the long, lonely end of the world’s remaining giant tortoises.

When Adalgisa ‘Gisella’ Caccone began trying to assemble the complete set of Lonesome George’s genes in 2010, the technology was slow and expensive.

Sequencing a genome involves figuring out the order of every DNA base in an organism’s cells. The Human Genome Project, an effort to map all genes in the human genome completed in 2003, took nearly 15 years from planning to sequence completion and cost $2.7 billion — well out of the budget for a tortoise conservation project. 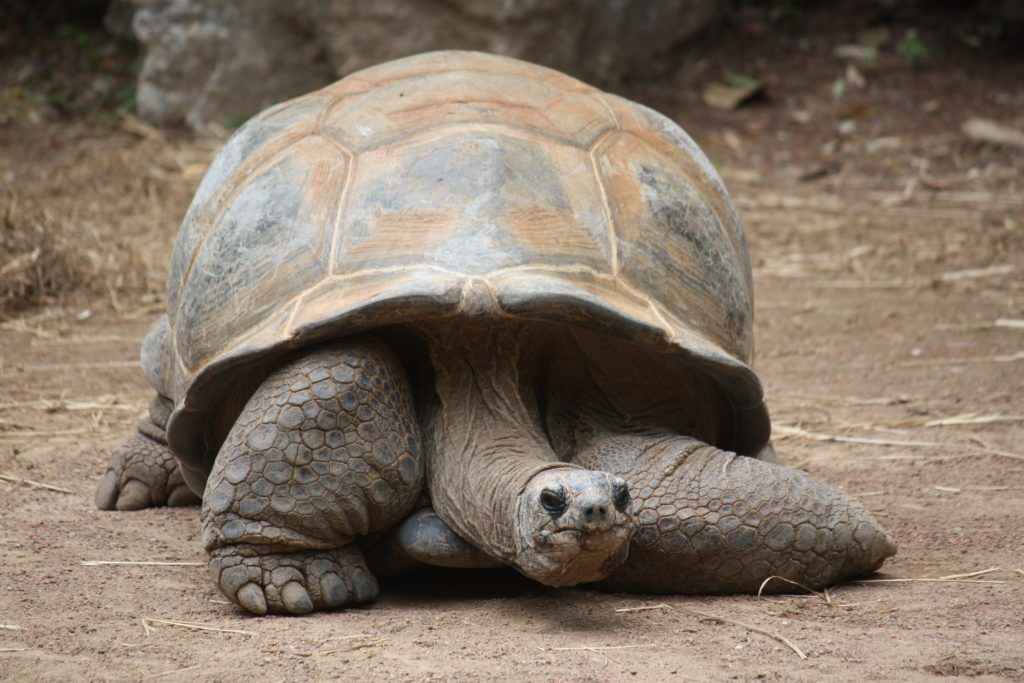 Aldabra giant tortoises are from the Seychelles near the east coast of Africa, half a world away from their relatives in the Galapagos islands. Photo by Trisha Shears

But Caccone, an evolutionary biologist from Yale University, benefited from a subsequent boom in sequencing technology. With Lonesome George’s genetic sequence in hand, Caccone needed someone with expertise in genome analysis. When a group of researchers from Spain put out a call for tortoise genes to study, Caccone told them “you came from heaven.”

Victor Quesada, of the University of Oviedo in northern Spain, was one of those researchers. He saw an opportunity to compare these rare reptiles with what we already know about human aging, and then to explore the genes that might control the process.

A genome doesn’t come divided into genes, so the team chose two methods to break it down.

“Every biochemical lesson you learn from one species, you could probably apply it indirectly to another.”

The first was an “automatic approach,” Quesada said. They tried to predict all the genes present in the giant tortoises using an algorithm that compared their genomes to known gene sequences from Chinese softshell turtles and humans.

“Humans and tortoises shared a common ancestor around 300 million years ago, so despite their visual differences the species still share a lot of genes,” Quesada said. “Every biochemical lesson you learn from one species, you could probably apply it indirectly to another.”

The second approach was a manual analysis. “We looked for genes associated with longevity,” Quesada said. For an organism to live for a long time, it must avoid diseases — like cancer and diabetes — as well as the degeneration of its joints, muscles and organs. So, Quesada’s list included genes known to produce proteins that regulate the way an organism processes nutrients, repairs DNA and kills off pathogens and tumors.

By targeting more than 3,000 genes of interest, the researchers could tease out the variations between humans and tortoises.

“That analysis is very powerful. It distinguishes this paper from many other papers,” said Vadim Gladyshev, a biologist who studies aging at Harvard Medical School and was not involved in the new study. “The paper is an important advance in terms of turtle biology, but in terms of the comparative approach, it is also an important resource.”

Thanks to this analysis, the researchers were able to narrow down their original list of 3,000 genes to 43 specific sequences that might have contributed to Lonesome George’s long, disease-free life. For researchers who study aging, those will be the next targets for further experiments into how those genes actually change an organism’s life.

Understanding those genes could be vital for species related to Lonesome George, said Linda Cayot, science advisor to the Galapagos Conservancy, a group that advocates for the protection of the Galapagos Islands and their animal inhabitants. Their long, slow existence “has been key to their survival — from a time of overexploitation to a time of greater enlightenment and conservation,” she wrote in an email.

“When you sequence the last animal of a species, how often is the last message it’s sending one of hope for us?” Caccone said.