What’s the “flavor” of a neutrino, and does it change? For their work in discovering the answer to this question, Takaaki Kajita of University of Tokyo and Arthur B. McDonald of Queen’s University in Canada have now won the 2015 Nobel Prize in Physics.

Their discoveries offered the first insights into the nature of what some people call the “chameleons of particle physics.” And by doing so, we might one day be able to send communications through the Earth’s core or independently track illegal nuclear proliferation.

“As it turns out, I did not mind,” said Arthur B. McDonald on being awoken by a phone call from the Nobel committee in Stockholm. The prize was announced by Göran K. Hansson, Permanent Secretary of the Royal Swedish Academy of Sciences.

Open your hand right now and then close it into a fist. You’re now holding some neutrinos, though they won’t sit there for long. Neutrinos are subatomic particles created by the radioactive decay of elements, and they’re everywhere. Aside from light particles, neutrinos are the second-most abundant particles in the universe.

Takaaki Kajita and Arthur B. McDonald’s reactions to winning the 2015 Nobel Prize in Physics.

“Many neutrinos are created in reactions between cosmic radiation and the Earth’s atmosphere. Others are produced in nuclear reactions inside the sun. Thousands of billions of neutrinos are streaming through our bodies each second,” the Nobel committee wrote in a statement. (Don’t worry, neutrinos are harmless.)

Neutrinos are elementary to the fabric of the universe, but little is known about them. Since scientists developed the theoretical concept of neutrinos 80 years ago, the quantum particles have remained one of physics’ most elusive targets.

Kajita cracked part of the code around the turn of the millenia. In 1998, he presented the first convincing evidence that neutrinos can change “flavors” (or states).

Neutrinos come in three flavors: electron, muon or tau. Kajita showed that muon-neutrinos — which are created when cosmic rays from space interact with our atmosphere — disappeared before reaching a detector on the surface of the planet at the Super-Kamiokande observatory in Japan. 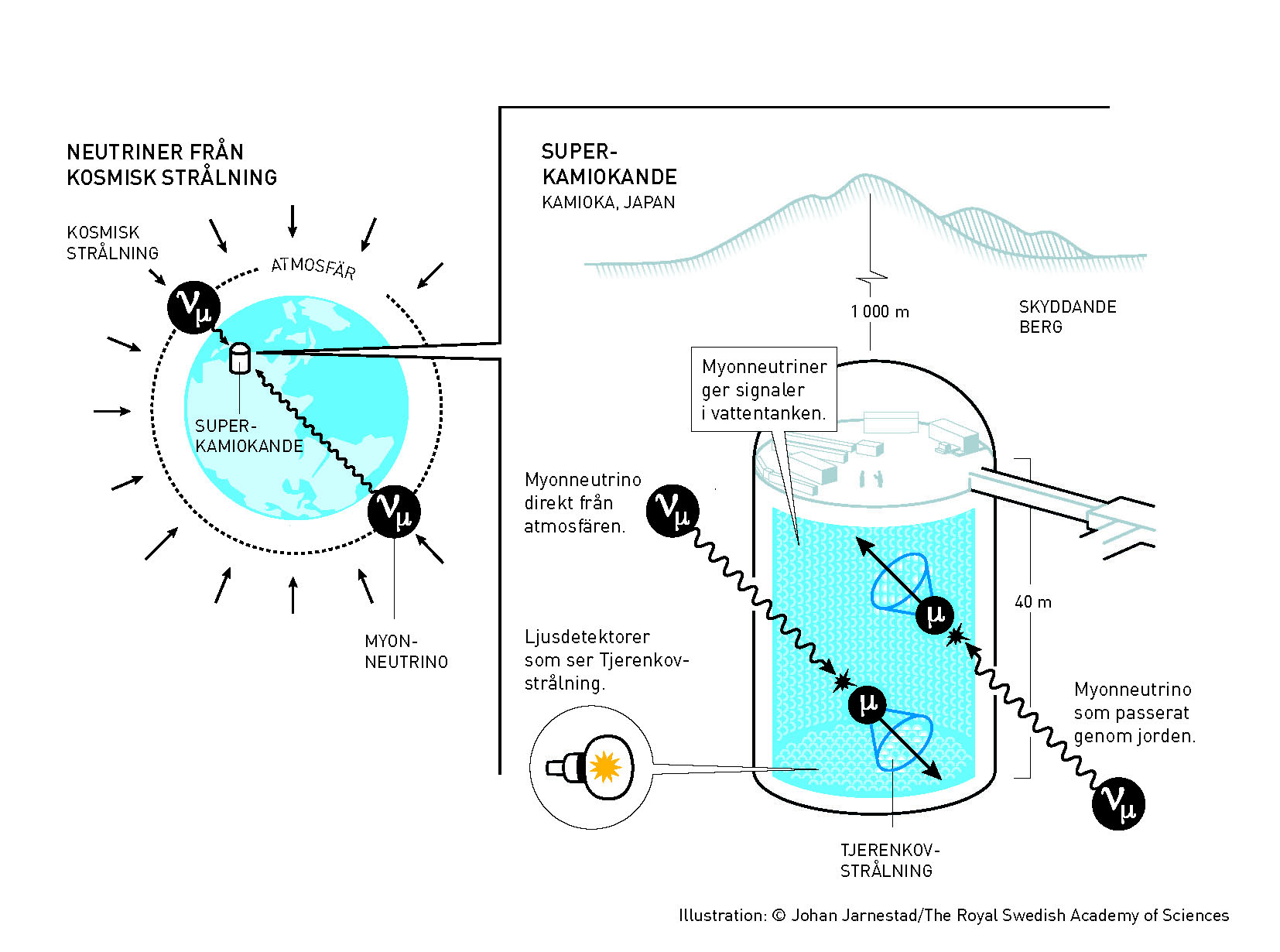 “Super-Kamiokande is a gigantic detector built 1,000 metres below the Earth’s surface. It consists of a tank, 40 metres high and as wide, filled with 50,000 tonnes of water. The water is so pure that light beams can travel 70 metres before their intensity is halved, compared to just a few metres in an ordinary swimming pool,” The Nobel committee wrote. “Every now and then, a neutrino collides with an atomic nucleus or an electron in the water. These collisions create charged particles – muons from muon-neutrinos and electrons from electron-neutrinos. Around the charged particles, faint flashes of blue light are generated. This is Cherenkov light, which arises when a particle travels faster than the speed of light. The shape and intensity of the Cherenkov light reveals what type of neutrino it is caused by, and from where it comes.” Photo by The Royal Swedish Academy of Sciences.

But this disappearance wasn’t a regular Houdini act. The muons switched from their original identities into tau neutrinos. This observation was important because it suggested that neutrinos aren’t static, but oscillate. The discovery provided the first hint that neutrinos have mass, giving the particles some much needed identity.

McDonald would later back the idea of neutrino oscillation by examining the sun. It was a long-held belief that electron-type neutrinos from our Sun vanished on their journey to Earth. In contrast, McDonald’s team observed electron-type neutrinos converted into muon- or tau-neutrinos, thanks to recordings at the Sudbury Neutrino Observatory in Ontario, Canada over the course of 2001 and 2002.

So why should you care? What are the practical applications?

Since neutrinos pass through solid objects, they could be used to send messages through the Earth, which would dramatically speed up global communications. The oscillations of the particles could be used as a way to encode the message. A group of scientists at the University of Rochester and North Carolina State University have already shown that neutrinos can communicate a message through 790 feet of stone. Also, nuclear reactors emit neutrinos, so weapons watchdogs might use these particles to detect nuclear proliferation. (The Boston Globe has an excellent rundown of the practical applications of neutrinos and their feasibility.)

Yet the impact of Kajita’s and McDonald’s work becomes most apparent in the field of astrophysics. Together, their discoveries expand our fundamental understanding of our sun, which gives life to everything on the planet, but also the universe at large. By catching the chameleons of particle physics, their work makes it easier to spot exploding stars in distant galaxies or to understand how planet cores stay warm.

“This year’s prize highlights a seriously important step in our understanding of the fundamental particles of the universe, and one that has improved our understanding of both particle physics and cosmology,” said Robert G.W. Brown, CEO of the American Institute of Physics said in a statement.

Left: Torn between identities – tau-, electron- or myon-neutrino? Photo by The Royal Swedish Academy of Sciences.