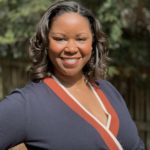 Historically, urban renewal and eminent domain have separated hundreds of thousands of African Americans from their property and locked them out of generational wealth. But a newly dedicated park outside St. Louis, Missouri is one of the latest attempts to reconcile a decades-old wrong. St. Louis community reporter Gabrielle Hays joins Judy Woodruff to discuss.

Talesha Reynolds is PBS NewHour’s senior content and special projects producer. Reynolds joined the NewsHour in 2021 after eight years at NBC News where she produced investigative, feature and breaking news pieces for NBC Nightly News, the Today Show, and NBCNews.com while based in the Washington bureau. In addition to supporting the nightly broadcast, Reynolds manages various multi-platform projects as well.