NIPAWIN, Saskatchewan — A semi-trailer slammed into a bus carrying a youth hockey team in western Canada, killing 15 people and injuring 14 in a catastrophic collision that a doctor compared to an airstrike and left the vehicles obliterated in the snow. The crash sent shockwaves through the team’s small hometown and a country united by the national sport.

Canadians were moved to tears on Saturday as they learned of the identities of the deceased on the bus that was driving the Humboldt Broncos hockey team to a crucial playoff game Friday against the Nipawin Hawks.

“An entire country is in shock and mourning,” Prime Minister Justin Trudeau said. “This is every parent’s worst nightmare. No one should ever have to see their child leave to play the sport they love and never come back.”

The bus had 29 passengers, including the driver, when it crashed at about 5 p.m. on Highway 35, police said. Among the dead are Broncos head coach Darcy Haugan, team captain Logan Schatz and radio announcer Tyler Bieber. Authorities earlier said three were in critical but later provided an update to say that 15 have now died.

Canadian police said the truck driver was initially detained but has since been released and provided with mental health assistance. Royal Canadian Mounted Police Assistant Commissioner Curtis Zablocki said it’s too early to state a cause for the crash.

In a tweet, U.S. President Donald Trump said he called Trudeau to offer his condolences to the families of victims.

Darren Opp, president of the Nipawin Hawks, who the Broncos were set to play against, said a semi T-boned the players’ bus — an account police confirmed. 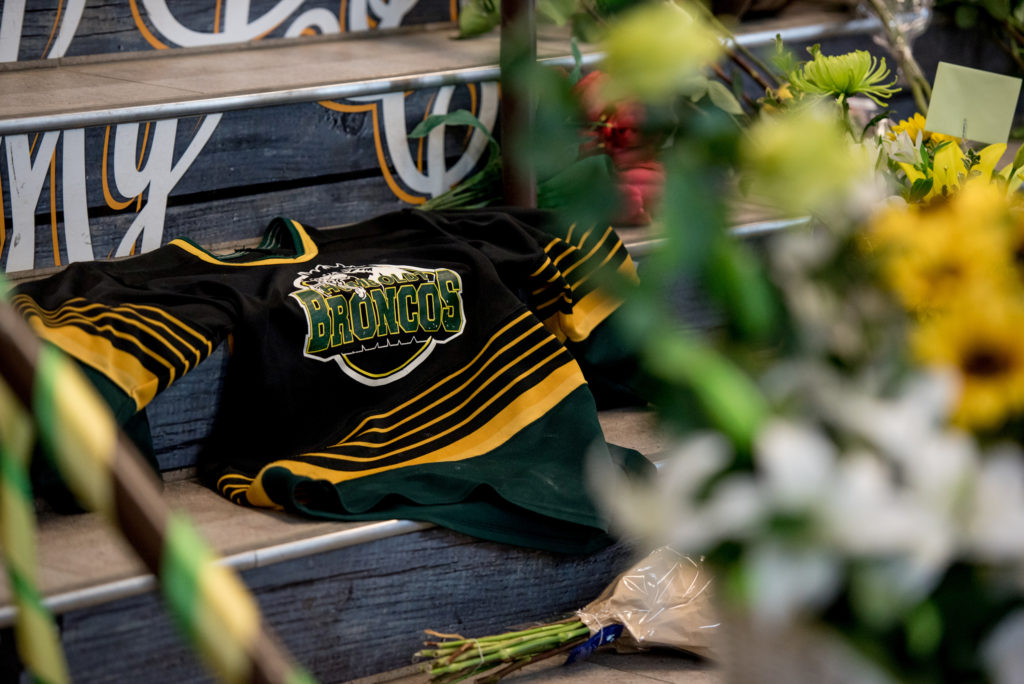 Hassan Masri, an emergency room doctor at Saskatoon’s Royal University Hospital who has done work in war-torn Syria, said the crash reminded him of an airstrike. Photographs of the wreckage showed the twisted trailer with most of its wheels in the air and the bus on its side and its back portion destroyed.

Kelly Schatz, Logan’s father, says his 20-year-old son played for the Broncos for just over four years and had served as team captain for the past 2 ½ years. Meanwhile, tributes poured in online for coach Haugan, a father of two who was described as an amazing mentor to young players.

The names of others killed have not been confirmed. STARS air ambulance said it sent three helicopters to the scene.

The tragedy brought to mind an accident in 1986, when the Swift Current Broncos team bus slid off an icy highway and crashed in late December, killing four players.

The Humboldt Broncos are a close-knit team from the small city of Humboldt, Saskatchewan, which has a population of about 6,000. Many gathered at the community center at the hockey arena there after word of the horrific crash began to circulate.

Humboldt Mayor Rob Muench, wearing a green and yellow Broncos team jersey, hugged people Saturday morning as they came to the Elger Petersen Arena in the Saskatchewan town to comfort each other and learn more. 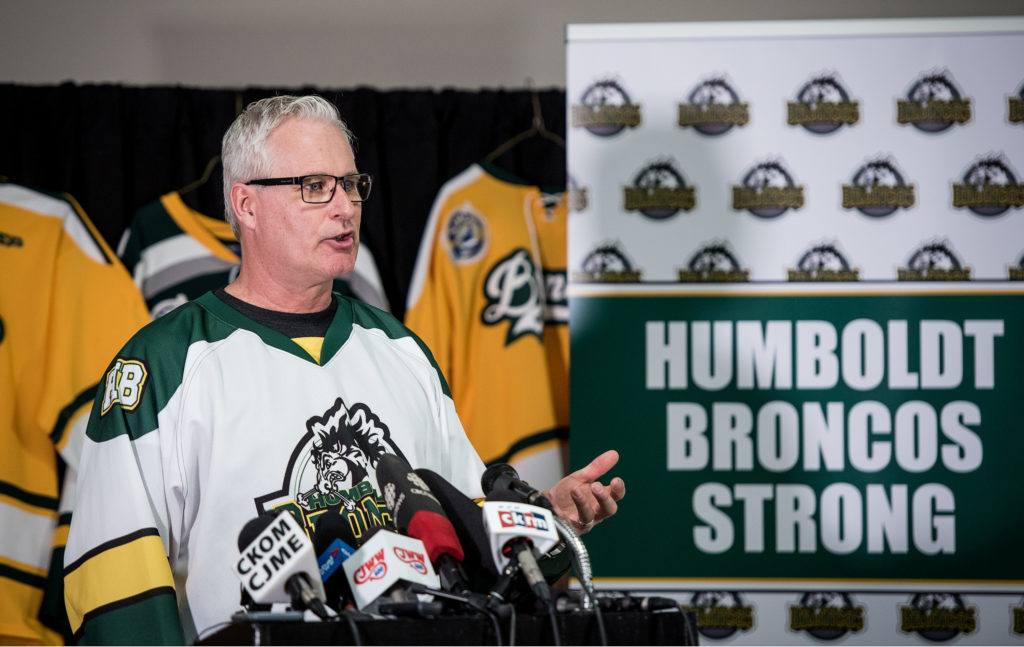 Mayor of Humboldt Rob Muench speaks with members of the community and media during a press at the Elgar Petersen Arena in Humboldt Saskatchewan, Canada April 7, 2018. Photo by Matt Smith/Reuters

“It’s overwhelming. It’s been tough on everybody,” Muench said in a phone interview. “We’re a small community; some of those kids have been on the team for a number of years. A lot grew up in the community and everybody knows each other.”

The team was on its way to play in Game 5 of a semi-final against the Nipawin Hawks.

“Hockey was what brought us all together and we had two communities that were rivals in the rink. To find out that it was their first responders that aided our boys just warms your heart,” the mayor said as his voice cracked.

“Everybody is just so devastated. These poor young boys,” said Penny Lee, the communications manager for the town of Humboldt.

Team President Kevin Garinger said parents from across western Canada were struggling to cope with the tragedy and were rushing to the scene.

“Our whole community is in shock, we are grieving and we will continue to grieve throughout this ordeal as we try to work toward supporting each other,” he said.

Michelle Straschnitzki, who lives in Airdrie, Alberta, said her 18-year old son Ryan was transported to a hospital in Saskatoon, Saskatchewan.

“We talked to him, but he said he couldn’t feel his lower extremities so I don’t know what’s going on,” she said. “I am freaking out. I am so sad for all of the teammates and I am losing my mind.”

Garinger said he still didn’t know the fate of one of the players living in his home.

“We just need to try to support each other as we deal with this incredible loss to our community, to our province, to our hockey world.”

Kevin Henry, a coach who runs a hockey school in Prince Albert, Saskatchewan, said he knows players on the team.

“This is I would think one of the darkest days in the history of Saskatchewan, especially because hockey is so ingrained in how we grow up here,” he said.

Much of the hockey world issued messages of condolences, including Saskatchewan native Mike Babcock, who is the Toronto Maple Leafs coach.

Babcock, fighting back tears, said that “it’s got to rip the heart out of your chest.”

Rob Gillies contributed to this report from Toronto and Ivan Moreno contributed from Milwaukee.

Left: Members of the community and media gather for a press conference with RCMP and representatives of the Humboldt Broncos and the Junior Hockey League at the Elgar Petersen Arena in Humboldt Saskatchewan, Canada April 7, 2018. Photo by Matt Smith/Reuters