The election is only 20 days away, meaning what was once a mirage — the end of the 2016 presidential campaign — has started to solidify into an honest-to-goodness denouement in the form of Nov. 8.

The round-the-clock coverage of the election has exhausted Americans. In fact, most Americans were “worn out” by the coverage in July, according to a Pew survey then. Maybe it was because we endured the “Jeb Bush 2016?” pontificating at the end of the last election? Maybe it’s because we’re already reading the tea leaves for 2020?

Or, maybe, it’s because mustachioed undecided voter Ken Bone, a chance salve from the last presidential debate, was built up and torn down in less than a week’s time. (I wonder how many will hesitate to sport a red sweater this Halloween, a holiday that allows political geeks a final chance to demonstrate they have been paying attention to this year’s election.)

But before you “unplug the internet and just look at cat GIFs,” take a moment to catch up on these domestic and international stories that aren’t receiving the same amount of air time or column inches as this election.

1. The battle to wrestle control of Mosul from ISIS begins

Kurdish fighters, supported by U.S. coalition forces, launched their operation to retake Mosul, Iraq’s second-largest city, from the Islamic State. ISIS seized Mosul in 2014, and the terrorist group has since lost footholds elsewhere in Iraq and in Libya. Defense Secretary Ashton Carter called the Mosul campaign a “decisive moment” in the fight against ISIS.

Why it’s important: There has been a noticeable dip in the amount of ISIS propaganda released recently, but “I wouldn’t be quick to declare a victory of any kind,” Rukmini Callimachi of The New York Times told the NewsHour last week.

“This is a group that has shown itself to be very nimble. And despite their losses on the battlefield, we’re seeing that attacks in the West are continuing to proliferate,” she said.

The mission to take back Mosul is also a test of the Obama administration’s theory that ISIS ought to be defeated locally without American troops on the ground, the Associated Press reported.

2. As waters recede, the long-term consequences of Hurricane Matthew start to emerge 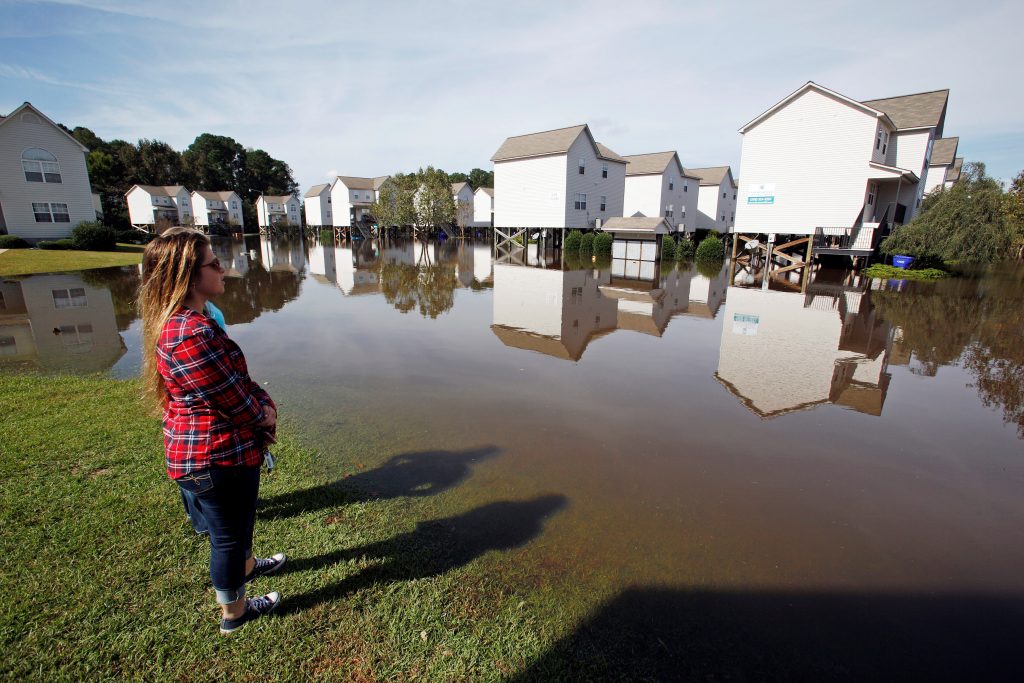 Residents of a flooded neighborhood survey the extent of water infiltration from the swollen Tar River in the aftermath of Hurricane Matthew, in Greenville, North Carolina. Photo by Jonathan Drake/Reuters

More than a week after the hurricane made landfall on southeastern U.S., Matthew’s death toll continues to climb. Overall, the storm has been blamed for around 1,000 deaths in Haiti and more than 30 in the United States. Parts of North Carolina also remain underwater. Two more bodies were recovered over the weekend as waters receded, bringing the death toll in the state to 26, Reuters reported.

Why it’s important: The deluge in North Carolina has many experts worried about Hurricane Matthew’s long-term effects, including possible environmental contamination from animal waste in the swine and poultry-heavy state, the Washington Post reported.

“An incalculable amount of animal waste was carried toward the ocean,” the Post reported. “Along the way, it could be contaminating the groundwater for the many people who rely on wells in this part of the state, as well as threatening the delicate ecosystems of tidal estuaries and bays.”

The U.S. Navy is investigating a missile launch off the coast of Yemen on American warships patrolling the Red Sea over the weekend. This would be the third possible missile launch that has targeted U.S. ships in a week.

Barbara Bodine, former U.S. ambassador to Yemen, spoke with NewsHour Weekend about the U.S.’s role in the country’s ongoing civil war between Iran-backed Houthi rebels and the internationally recognized government. BBC also has a breakdown of who’s fighting whom.

4. The vast impact of the Boko Haram insurgency

In 2014, Boko Haram kidnapped more than 270 girls from the Nigerian town of Chibok. Reportedly, the girls were subjected to abuse, forced marriage or sold as slaves. One escaped abductee said in May that some of the girls have died as well, the Associated Press reported.

Why it’s important: Aid workers warn that a larger humanitarian crisis looms over Nigeria, and it has been underestimated by the United Nations and journalists: hunger. The millions of Nigerians displaced by Boko Haram are in danger of starving, the Post’s Kevin Sieff told the NewsHour.

Sieff said news of the growing famine was largely unknown to aid workers and journalists because it’s extremely difficult to get access to these war-torn areas.

“I think another reason is, there was just a total institutional failure both at the U.N. and within other international NGOs that really should have known how bad things were, but simply didn’t have the resources in Nigeria, didn’t have strong enough teams, weren’t trying hard enough to find out what the situation really looked like outside of the capital of the state,” he added.

American musician Bob Dylan — an extremely understated descriptor of the artist — was awarded the Nobel Prize in Literature this year. While columnists were wringing their hands over whether Dylan deserved the honor or not, the troubadour has avoided the Swedish Academy’s calls, emails and, one would assume, carrier pigeons about whether he’ll attend the Nobel Prize Award Ceremony this December in Stockholm, The Guardian reported.

Do you have suggestions for stories that ought to get more attention? Leave them in the comments below.

Left: Mist rises off the water as a flooded building is pictured after Hurricane Matthew passes in Lumberton, North Carolina. Photo by Carlo Allegri/Reuters