As tension escalated this week between the United States and North Korea, the world turned its attention to the U.S. territory of Guam, which North Korean state media reported had become the target of a retaliatory attack. North Korean military officials said a plan to fire four mid-range missiles about 25 miles off the island’s shores would be finalized later this month. The threat comes after President Donald Trump warned that North Korea would face “fire and fury” if it continued to threaten the United States, a warning he reiterated Thursday.

The tension comes on the heels of an intelligence report that suggested North Korea has miniaturized nuclear weapons to fit on missiles.

Guam is a relatively isolated island known for little more than its U.S. military port. Here are five things you might not know about the territory.

Guam is home to U.S. Naval Base Guam and the Andersen Air Force Base. Located on the northeast side of the island, the Air Force base retains a fleet of B52 bombers and fighter jets. The naval base, located on the southwest part of the territory, has nuclear-powered submarines. About 7,000 U.S. soldiers and their families live on the island, which has a population of 160,000, according to the Associated Press. As a result, Guam’s economy relies heavily on the U.S. Armed Forces, which owns a third of the island. The tourist district, Tumon, is located between the two military bases. 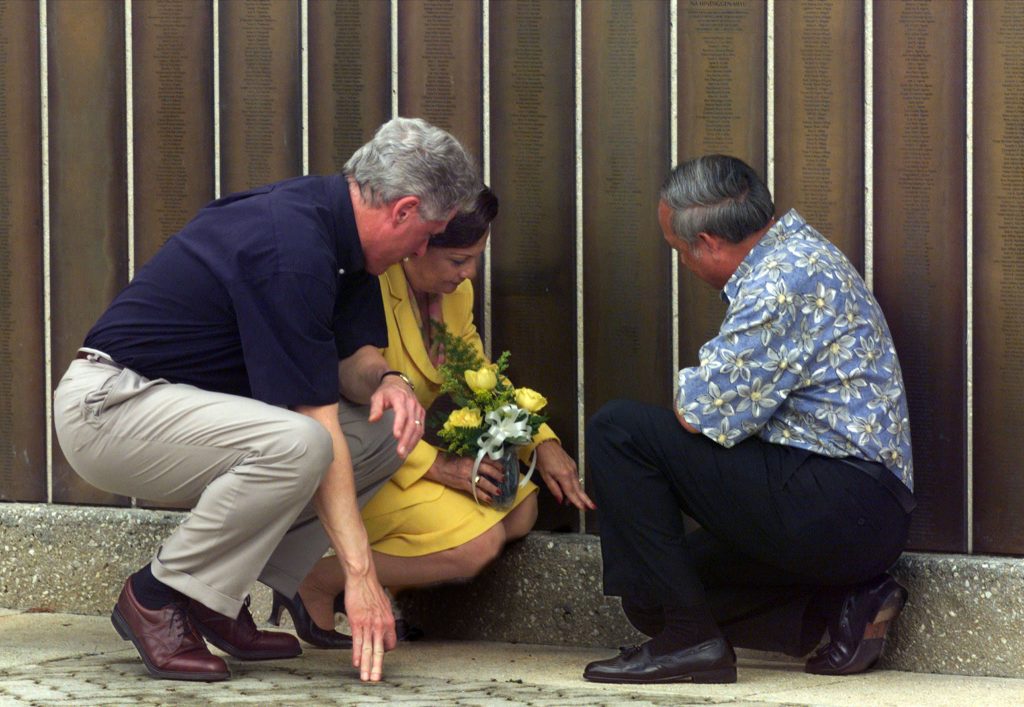 Former President Clinton squats as he examines the names of World War II war dead on a wall at the War in the Pacific National Historical Park on the island of Guam in 1998. Photo by Larry Rubenstein/ Reuters

2. Those born in Guam have American citizenship.

Spain claimed Guam in 1565, more than 40 years after Ferdinand Magellan landed on the island. Spain’s colonial rule continued until the U.S. took control in 1898 during the Spanish-American War. Spain officially handed over the land under the Treaty of Paris.

Japan temporarily controlled the island after the Pearl Harbor attack in 1941, but allied forces reclaimed the territory three years later. Guam officially became a U.S. territory in 1950 and was put under the administration of the Department of the Navy.

That same year, Congress passed the Organic Act of Guam, giving Guamanians American citizenship. However, Guamanians are still not allowed to vote in the U.S. presidential election.

Guam elected its first governor in 1970 and, since 1972, has had one nonvoting delegate in the U.S. House of Representatives. 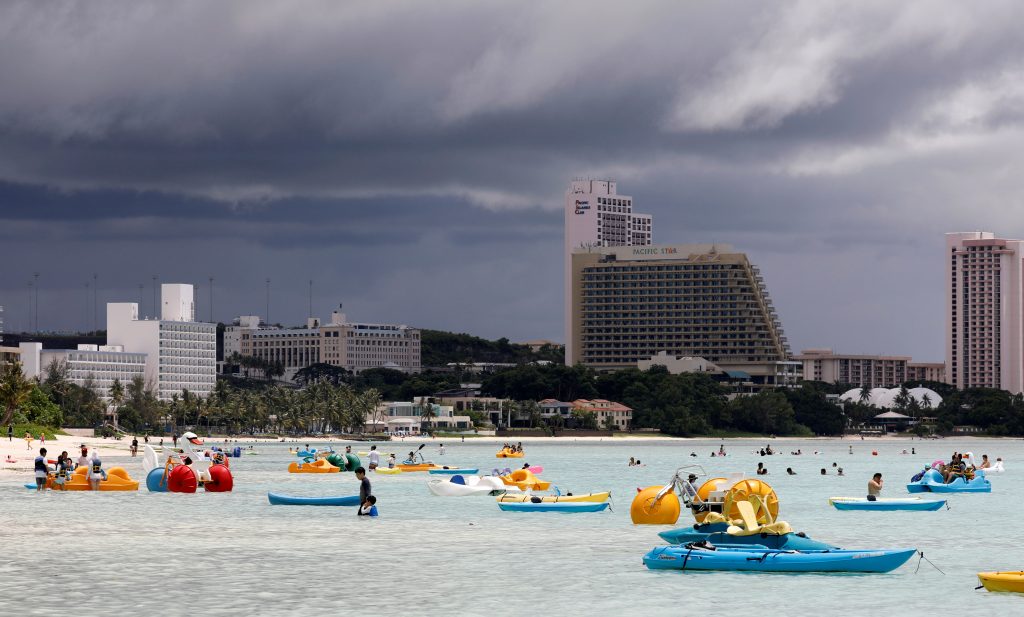 Tourists frolic on the waters overlooking posh hotels in Tumon tourist district on the island of Guam, a U.S. Pacific Territory. Photo by REUTERS/Erik De Castro.

3. Guam is closer to North Korea than it is to Hawaii.

Guam is the closest U.S. territory to North Korea at a distance of approximately 2,130 miles. That is close to half the distance between Guam and Hawaii, which sits about 3,960 miles away.

Guam is the southernmost island in what is known as the Mariana Archipelago and the largest island in Micronesia. It covers a total of 210 square miles — approximately the size of Chicago. 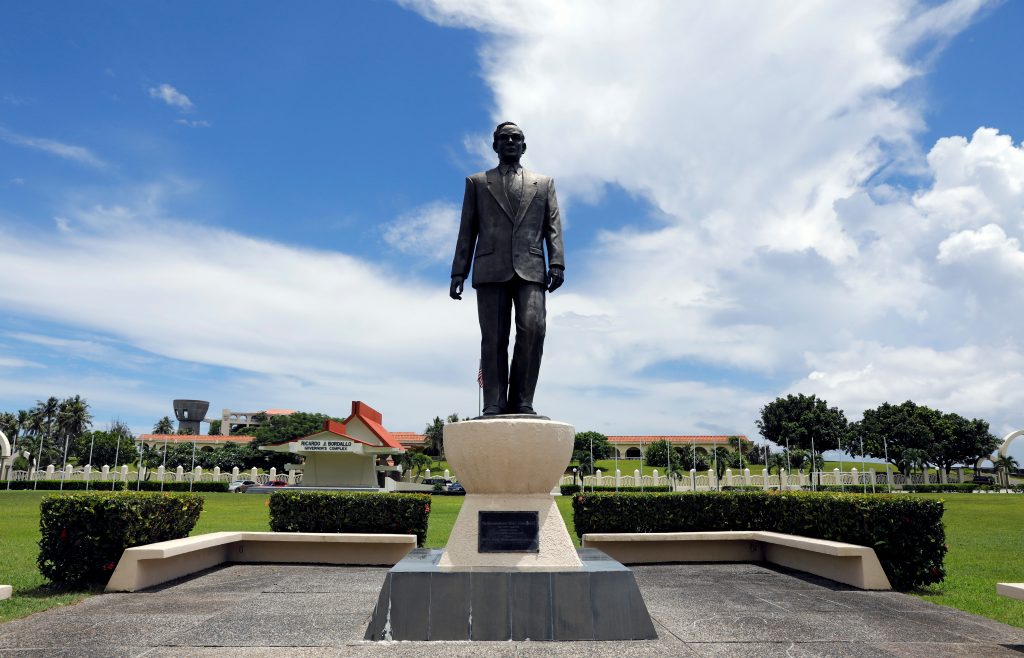 A statue of Guam hero Ricardo Bordallo is pictured at the entrance of the Governor’s Complex on the island of Guam, a U.S. Pacific Territory, August 10, 2017. REUTERS/Erik De Castro

About 40 percent of Guam’s residents are Chamorros, the name for the native people. About 24 percent are Filipino, 18 percent identify as several races, 7 percent are white, and 10 percent are of other Micronesian descent.

The official languages of Guam are English and Chamorro, which means ‘noble.’ It’s a Malayo-Polynesian language that has incorporated Spanish words over time. 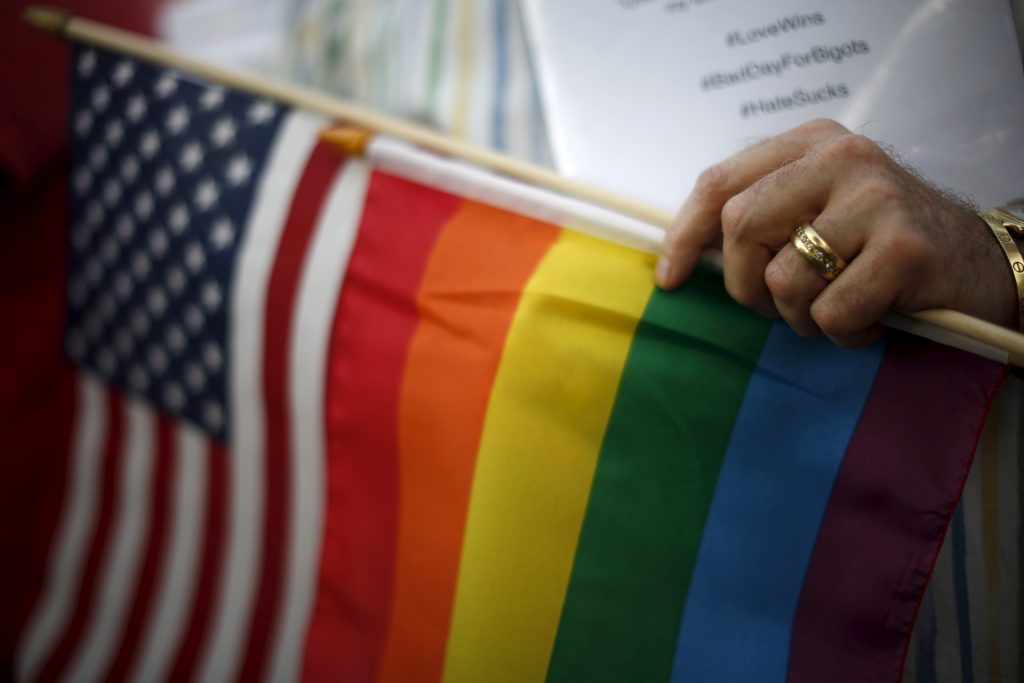 A married gay man carries the rainbow and U.S. flags at a celebration rally in West Hollywood, California, following the 2015 Supreme Court decision on marriage equality. Photo by Nicholson/Reuters

5. Guam was the first U.S. territory to recognize same-sex marriage.

On June 5, 2015, Guam became the first U.S. territory to legalize same-sex marriage. District Court of Guam Chief Judge Frances Tydingco-Gatewood ruled in favor of Kathleen Aguero and Loretta Pangelinan, who became the first couple to obtain a marriage license. Three weeks later, the U.S. Supreme Court ruled same-sex marriage was legal throughout the U.S., including all its territories.

Left: Tourists stroll along a road on the island of Guam, a U.S. Pacific Territory, Aug. 10, 2017. Photo by REUTERS/Erik De Castro