HUALIEN, Taiwan — Rescuers worked Wednesday to free people trapped after a strong earthquake near Taiwan’s east coast caused several buildings to cave in and tilt dangerously. At least six people were killed and 76 could not be contacted following the quake.

The shallow, magnitude 6.4 quake late Tuesday night caused at least four buildings to cave in and shift on their foundations. That was likely caused by soil liquefaction, when the ground beneath a building loses its solidity under stress such as that caused by an earthquake.

A maintenance worker who was rescued after being trapped in the basement of the Marshal Hotel said the force of the earthquake was unusual even for a region used to temblors.

“At first it wasn’t that big … we get this sort of thing all the time and it’s really nothing. But then it got really terrifying,” the worker, Chen Ming-hui, told Taiwan’s official Central News Agency after he was reunited with his son and grandson following the quake. “It was really scary.” 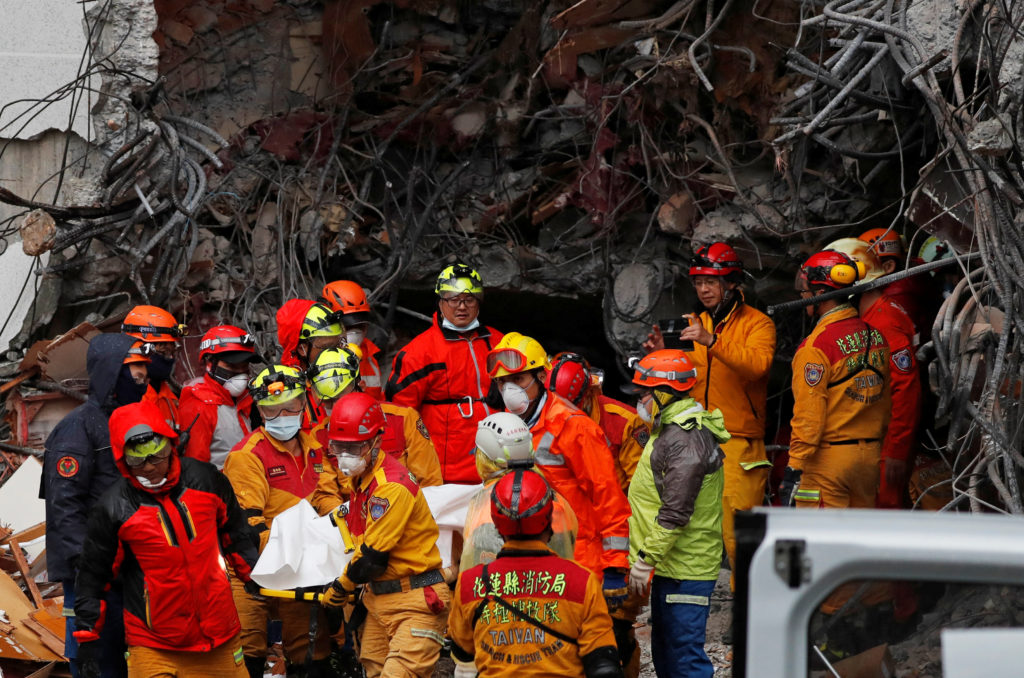 A body of employee of collapsed Marshal Hotel carried by a rescue personnel after an earthquake hit Hualien, Taiwan. Photo by Tyrone Siu/Reuters

Two employees of the hotel were killed in the disaster, CNA said. Taiwan’s National Fire Agency said rescuers freed another employee from the rubble.

Other buildings slanted at alarming degrees and rescuers used ladders, ropes and cranes to move residents to safety.

Six people were killed in the quake, while 256 others were injured and 76 unaccounted for, according to the fire agency. CNA reported that seven had been killed.

The force of the tremor buckled roads and disrupted electricity and water supplies to thousands of households, the fire agency said.

Rescuers focused on the Yunmen Tsuiti residential building that was tilted at a nearly 45-degree angle, erecting long steel beams to prevent it from collapsing.

Concrete blocks were laid on the steel rods to anchor them. Half a dozen excavator trucks surrounded the site, where rescue efforts were temporarily suspended because the building was “sliding,” according to Taiwan’s Central Emergency Operation Center.

More than a hundred rescue workers were around the building, including military personnel and volunteers who were distributing food and hot drinks. Away from the disaster area, the atmosphere in the city was calm as rain beat down on largely deserted streets. 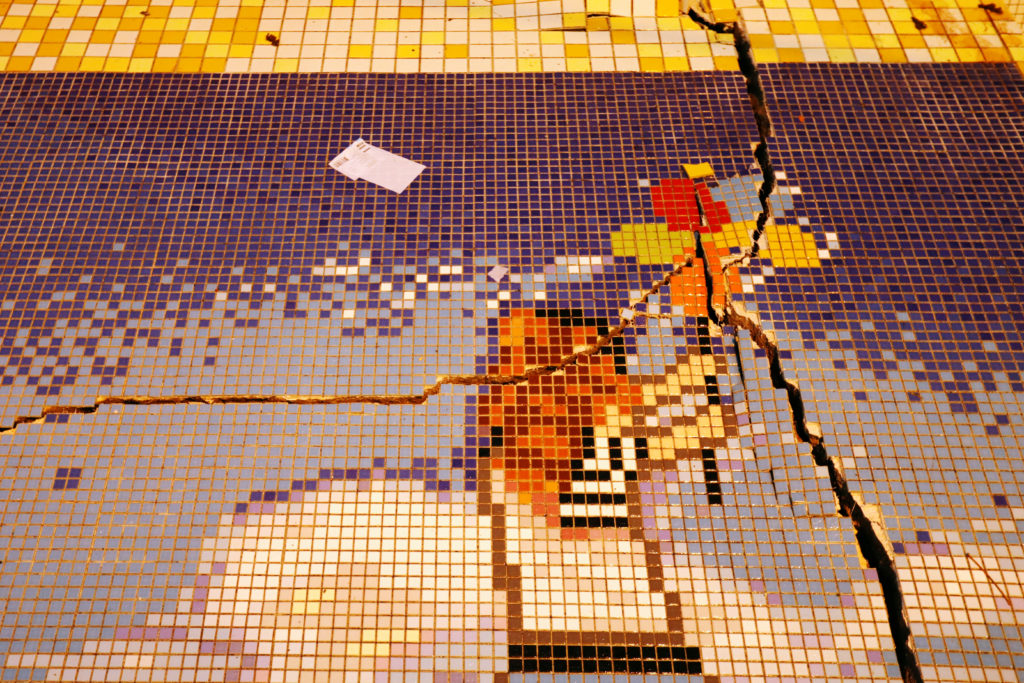 A damaged wall is seen after an earthquake hit Hualien, Taiwan. Photo by Tyrone Siu/Reuters

Taiwanese President Tsai Ing-wen moved to reassure the Taiwanese public that every effort would be made to rescue survivors. In a post on her official Facebook page, Tsai said she arrived in Hualien on Wednesday to review rescue efforts.

Tsai said she “ordered search and rescue workers not to give up on any opportunity to save people, while keeping their own safety in mind.”

“This is when the Taiwanese people show their calm, resilience and love,” she wrote. “The government will work with everyone to guard their homeland.”

Bridges and some highways along Taiwan’s east coast were closed pending inspections.

With aftershocks continuing to hit after the quake, residents were directed to shelters, including a newly built baseball stadium, where beds and hot food were provided.

Speaking from a crisis center in Taipei, Cabinet spokesman Hsu Kuo-yung said rail links appeared to be unaffected and the runway at Hualien airport was intact.

“We’re putting a priority on Hualien people being able to return home to check on their loved ones,” Hsu said.

The U.S. Geological Survey said the quake struck just before midnight Tuesday about 21 kilometers (13 miles) northeast of Hualien at a relatively shallow depth of about 10.6 kilometers (6.6 miles).

Taiwan has frequent earthquakes due to its position along the “Ring of Fire,” the seismic faults encircling the Pacific Ocean where most of the world’s earthquakes occur.

Exactly two years earlier, a magnitude 6.4 quake collapsed an apartment complex in southern Taiwan, killing 115 people. Five people involved in the construction of the complex were later found guilty of negligence and given prison sentences.

Left: Rescue workers are seen by a damaged building after an earthquake hit Hualien, Taiwan. Photo by Reuters