One hundred years ago, the heir to the throne of the Austro-Hungarian empire and his wife were assassinated by a gunman during a drive through Sarajevo.

One month later, Austria-Hungary declared war on Serbia. The killing of Archduke Franz Ferdinand would trigger one of the most brutal wars in modern history, eventually pulling in the Russian Empire, Germany, France, Italy, China, the U.S., Japan and beyond into World War I.

So who was Franz Ferdinand? We asked three experts who have studied that era.

Gary B. Cohen is a history professor and director of the Center for Austrian Studies at the University of Minnesota, Twin Cities; Geoffrey Wawro is the author of “A Mad Catastrophe: The Outbreak of World War I and the Collapse of the Habsburg Empire”; and Richard Ned Lebow is the author of “Archduke Franz Ferdinand Lives! A World Without World War I.” We also drew from the book “Archduke of Sarajevo: The Romance and Tragedy of Franz Ferdinand of Austria” by Gordon Brook-Shepherd.

Franz Ferdinand suffered bouts of tuberculosis during his 20s and early 30s. Many said this was due to his mother, Princess Maria Annunciata, who died of the disease at age 28.

The upside of weak lungs? He was sent all over the world for treatment. A whirlwind tour of the Mediterranean, a voyage to Asia and a sightseeing cruise down the Nile all helped to dampen the disease until his lungs healed for good in the late 1890s.

The coterie who surrounded the emperor — his uncle, Franz Joseph — at one time assumed that Franz Ferdinand would not live to inherit the throne. Cohen says that this readiness to dismiss the vulnerable nephew as a viable heir planted in him a seed of resentment toward the Habsburg Imperial Court (one that would grow).

Tigers in India, kangaroos, emus and wallabies in Australia and stag and deer in the forests of Austria all met their demise at the end of the archduke’s rifle.

“Anything that moved, he was ready to shoot,” said Lebow. His personal record was reportedly 2,140 kills in a day. 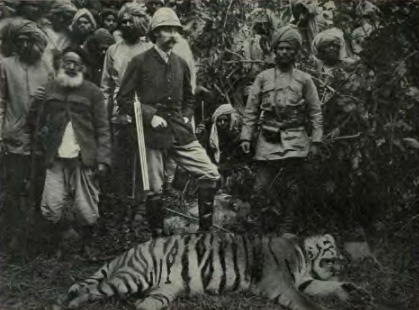 Franz Ferdinand shot his first tiger on a six-week trip to India in 1893. “I cannot describe my joy,” he wrote of the kill. Photo courtesy of Wikipedia Commons

Franz Ferdinand tallied his kills in a massive journal. The grand sum of pheasant, partridge and ground game that he shot was 272,511, according to calculations published in “Archduke of Sarajevo.”

Emperor Franz Joseph described his nephew’s hobby as mass murder, said Cohen, while others considered it a mania.

Hunting trophies — an estimated 100,000 — cluttered his estate at Konopischt. You had to be careful walking down the halls to avoid getting impaled by antlers, said Cohen.

At the estate, “(t)he foot of a giant elephant, shot by the Archduke in Kalawana in 1893, serves as an ashtray; the foot of another such colossus from Ceylon as a wastepaper basket,” wrote a government official from Prague.

3. His wife was deemed totally unsuitable for the dynasty

Countess Sophie Chotek of Bohemia — a lady-in-waiting when the two met — was just below the level of princess, and according to Habsburg rule, ineligible to marry the archduke. His uncle, Emperor Franz Joseph, deeply resented Franz Ferdinand’s resolve to break this rule.

Franz Ferdinand enlisted the support of the pope, the czar and the kaiser, said Lebow, to twist the emperor’s arm until he agreed. However, Sophie could gain no royal rank and their children were stripped of all claims to the throne. Sophie could not appear at most major events by his side, nor could she be buried in Vienna where the Habsburgs were buried.

Even in death, Sophie didn’t escape reminders of her ranking. Gloves, a symbol of a lady-in-waiting, decorated the bronze of her sarcophagus.

4. He wanted to rock the boat, and the emperor didn’t like it

Franz Ferdinand was an ill-tempered, outspoken, headstrong man, said Cohen, and he pressed the emperor to modernize the archaic rules that were slowly killing the empire, as he saw it.

“He was quite prepared to rock lots of boats,” Cohen said.

“He was old and torpid,” said Wawro. The emperor, nearly 70-years-old at the turn of the century, often spent 14 hours a day at his desk buried in bureaucratic matters.

“The comfortable ways of Franz Joseph were leading (the empire) to the grave,” said Wawro. “Things had to be shaken up.”

But the greatest strain on their relationship? Sophie. Franz Ferdinand never forgave his uncle for trying to stand in the way of their marriage.

5. He had a passion for roses

Thousands of rose beds stretched out in a maze-like pattern over the grounds of his estate at Konopischt. According to “Archduke of Sarajevo,” guests often lost their way in “the great floral mosaic” of roses.

His daughter Sophie recalled that her father was always studying flowers and pressing them into his books.

6. He advocated universal suffrage (but not for women)

Franz Ferdinand wrote in his notes that once he became emperor he would introduce universal suffrage, a.k.a. one-man, one-vote. But not for the reasons you may assume; Franz Ferdinand was no friend to democracy, said Cohen.

He was interested in weakening Hungarian power, said Cohen, which he hated and believed was the barrier to change. Greater rights for south Slavs, Czechs and other subjugated ethnicities on the Hungarian side of the empire would undermine their political sway, and consolidate power in the crown. 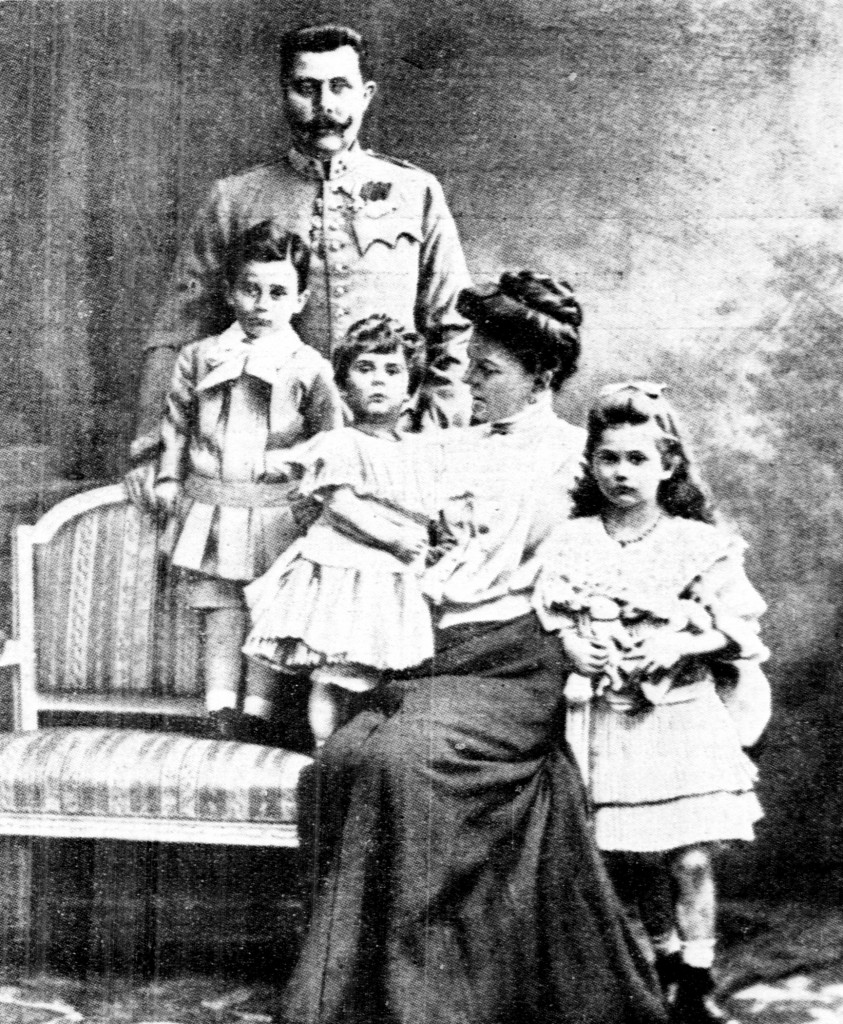 Franz Ferdinand with his wife, Sophie Chotek, and their three children: Maximilian, born 1902; Ernst, born 1904; and Sophie; born 1901. Photo by the New-York Tribune

Franz Ferdinand showed very little warmth to anyone but his wife and three children. In a letter, published in “Archduke of Sarajevo,” to his stepmother, Archduchess Maria Theresa, after the birth of his second son in 1904, Franz Ferdinand writes:

By far the cleverest thing I ever did in my life was to marry my Sophie. She is everything for me: my wife, my doctor, my advisor — in a word my whole happiness. …And then our children! They are my whole pride and joy. I sit with them all day long in amazement that I can love them so much. And then the evenings at home when I smoke my cigar and read my papers. Sophie knits and the children tumble about, knocking everything off the tables. It’s all so cozy and precious…

In fact, when Sophie was shot alongside Franz Ferdinand in 1914, these were his last words to her, as published in “Archduke of Sarajevo”: “Sopherl, Sopherl, don’t die. Stay alive for the children!”

8. He probably could have avoided his assassination

Franz Ferdinand ignored warnings that Serbian terrorist group the Black Hand — still reeling from Austrian annexation in 1908 — was plotting to assassinate him during his state visit to Sarajevo.

Plus, the day of his tour was Serbia’s National Day. Sophie pleaded with him not to go.

So why did he? Death was better than humiliation, said Lebow. It was a matter of honor. 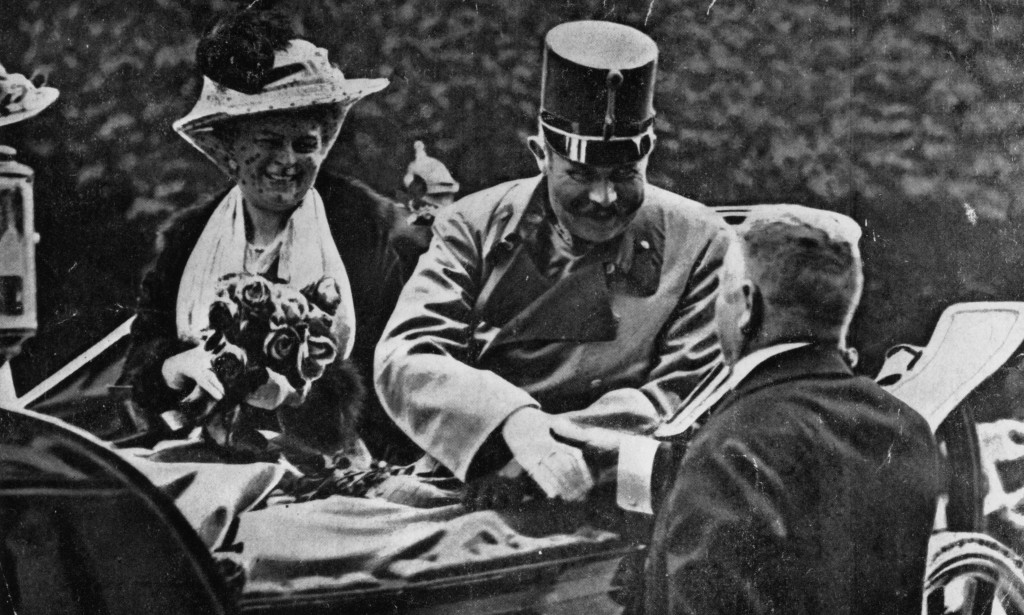 Franz Ferdinand and his wife Sophie riding in an open carriage at Sarajevo shortly before their assassination on June 28, 1914. Photo by Henry Guttmann/Getty Images

On June 28, 1914, Franz Ferdinand and Sophie were riding in the third of a seven-car convoy when a bomb bounced off their hood, exploding as the fourth car passed.

At this point, said Lebow, “any security detail worth its salt would have rushed these people out of town immediately.”

But they didn’t. Franz Ferdinand insisted that they pay a visit to an officer wounded in the bombing. On the way, the driver took a wrong turn, and happened to reverse right in front of one of the conspirators, Gavrilo Princip, who, said Lebow, was sipping a drink outside.

Pointing his pistol at the car, Princip fired two shots.

And the rest, as they say, is history.

‘The shots heard round the world’ 100 years ago

Left: The assassination of Franz Ferdinand and his wife, Sophie Chotek, on their state visit to Sarajevo. The illustration was published in the French newspaper Le Petit Journal on July 12, 1914.