On the morning of Tuesday, Sept. 11, 2001, Jonathan Hyman was driving home from dropping his daughter off at school when he heard the news.

The Bethel, N.Y.-based documentary photographer knew that the attacks would alter the lives of Americans everywhere and it was his intention to capture the nation’s vernacular response.

He started taking pictures that day of what he saw popping up in public places and on the side of the road. 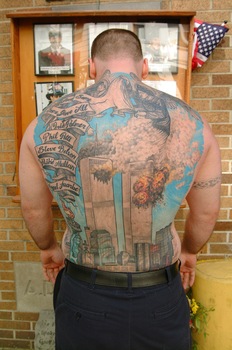 “There was so much material out there, so much raw emotion,” Hyman said standing in front of a collection of his images that are currently being exhibited in lower Manhattan.

It quickly became a full-time task. He’d go on to spend the next five years photographing makeshift memorials, tributes to loved ones lost in the World Trade Center, graffiti art under bridges, personal tattoos and patriotic murals stretched across high-rise buildings, firehouses and the back of pickup trucks.

Hyman describes his self-funded, independent project as aiming to capture a broad range of sentiment and emotion.

“Anything that was 9/11 related that I could find, I tried to document it,” Hyman said. “I took a picture regardless of whether I thought it was good art or bad art or politically correct or incorrect. My goal was to simply say here is what I saw and here it is.”

Hyman, who still takes photos of 9/11 material but no longer as a full-time endeavor, said it was clear to him right away that the attacks themselves would be “woven into the fabric” of America’s collective daily lives.

“Around that time I saw on the door of a gas station a New York Post with the headline Bin Laden Wanted Dead or Alive,” Hyman said, “And right next to it there was a handwritten note that said ‘baby sitter wanted,’ and I knew that was a kind of juxtaposition that I’d be interested in showing.”

Jan Ramirez, the chief curator of the National 9/11 Memorial, says that she admires the collection because while most of the initial response was focused at Ground Zero, Hyman made a conscious choice not to immediately go into New York City.

“Jonathan was not moving inward, he was moving outward into the suburbs,” Ramirez said. “He was going into the Tri-State region and into the neighborhoods that were in many ways collaterally scarred by these events.”

Hyman said he is in the process of photographing many of the people and places that he shot in the immediate aftermath of the attacks to see what has changed in the last 10 years.

“Most of what I photographed is gone and I felt a certain kind of urgency at the time to capture it,” Hyman said.

“I realized there was this rare and unique intersection of people who wanted to express their private emotions but do it publicly,” Hyman said.

“Visual Response On the Street, Photographs by Jonathan Hyman” runs until Oct. 8 at the Sylvia Wald and Po Kim Gallery in New York.