Editor’s note: Read an updated version of this story here.

The decade after the 9/11 attacks reshaped many facets of life in America. Some changes were temporary — an immediate response out of concern for our safety — while some proved to be more lasting transformations in American life.

An updated version of this story was published in 2018. Read that story here.

The American lexicon was one of the things that changed drastically in the months and years after the attack. Among the words or phrases (9/11 being one of them) that entered everyday language: al-Qaida, Taliban, ground zero, radicalism, extremism, anthrax and the Axis of Evil. Their usage dramatically increased and soon became part of Americans’ everyday lives.

With the 10th anniversary this week, we take a look at some of the other changes in American life:

Perhaps the most immediate and obvious changes after the attacks took place in U.S. airports. Two months after the attacks, Congress federalized airport security by passing the Aviation and Transportation Security Act, which created the Transportation Security Administration. Prior to 9/11, security had been handled by each airport, which outsourced to private security companies. 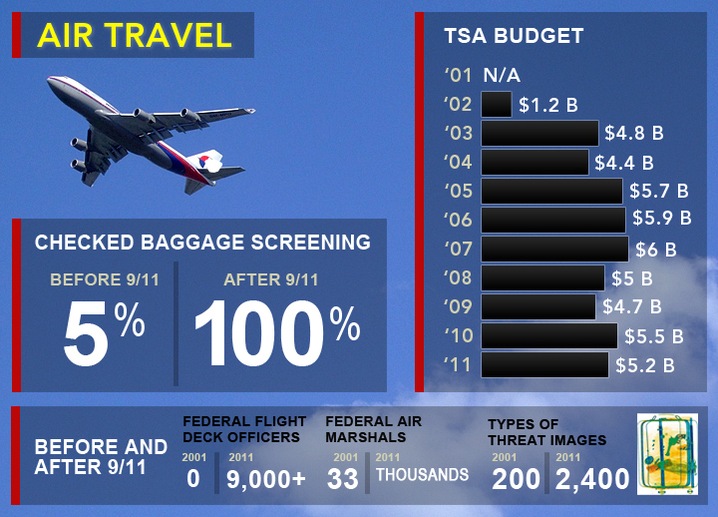 Airplanes themselves also underwent major overhauls: Fortified cockpit doors were introduced, and first-class cabin curtains were dropped by some airlines. Pilots can now apply to become a federal flight deck officer, allowing them to carry a loaded gun and act as a federal officer aboard the plane.

In order to offset the added security costs, a “Sept. 11 fee” was tacked onto passengers’ tickets, with the TSA collecting nearly $15 billion collected over nine years. Airlines also had to give some of their luggage screening budget to help offset costs as well. Air carrier fee collections amounted to $2.9 billion between 2002 and 2010.

While the Patriot Act may be the most recognizable piece of legislation relating to Sept. 11, more than 130 pieces of 9/11-related legislation were introduced in the 107th Congress in the year after the attacks, with 48 bills and resolutions approved or signed into law. Along with the Aviation and Transportation Security Act, they included the Enhanced Border Security and Visa Entry Reform Act, which required the State Department and Immigration to share visa and immigrant data with each other. Subsequent years brought the release of the Post-9/11 G.I. Bill, which gave educational funding to soldiers, and the James Zadroga 9/11 Health and Compensation Act of 2010, providing $4.2 billion for the health of people who worked at Ground Zero during and after the attacks. 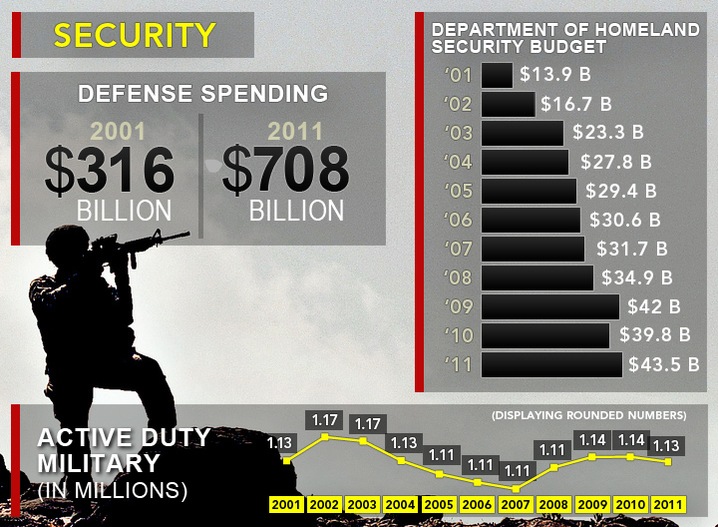 Government agencies created after 9/11 include the Department of Homeland Security, which consolidated other agencies, including the U.S. Immigration and Naturalization Service. According to The Washington Post, more than 263 government organizations were either created or reorganized following the attacks. The newspaper found that more than 1,200 government organizations and 1,900 private companies do work related to counter-terrorism, homeland security and intelligence. Budgets for defense-related agencies also rose. The Coast Guard, TSA and Border Patrol budgets have all more than doubled since 2001.

The International Code Council released post-9/11 building code suggestions to make skyscrapers safer and able to withstand similar incidents — at least long enough to evacuate occupants. Changes include more stairways for structures taller than about 42 stories, elevators that can be used during emergencies, higher fire-resistance and impact-resistant walls for elevator shafts and exit stairways.

The country with the most notable drop in visa issuance after 9/11 was Pakistan. In 2002, the number of tourist visas given to Pakistani citizens fell almost 70 percent and immigrant visas dropped more than 40 percent compared to 2001. It wasn’t until 2008 that Pakistani immigrant and tourist visas to reach pre-9/11 levels. Egypt and Morocco also saw sharp drops in visas issued in 2002, though both have rebounded since.

International tourism to America fell for three years after 2001. Starting in 2004, it began to increase again, surpassing pre-2001 numbers in 2007. In 2010, a record 60 million foreign tourists visited. The number of Americans who traveled internationally also declined after 9/11, the Office of Travel and Tourism Industries reports.

Deportations as a whole rose by 104 percent from 2001 to 2010, according to data from the Department of Homeland Security. The region with the highest deportation percentage was Central America, with a 430 percent increase, going from 14,452 deportees to 76,603. Asia saw a 34 percent rise in deportations, while Europe rose by 46 percent. Deportations for persons from Egypt, Pakistan and Jordan spiked in 2003, with Egypt showing the highest increase — 205 percent.

Anti-Islamic violence in America jumped after the attacks. According to the FBI, 28 hate crimes committed in 2000 were found to be anti-Islamic. In 2001, that number jumped to 481, and it remained above 100 in subsequent years.

Clinical psychologist Hisham Abu-Raiya of Tel Aviv University conducted extensive research on the aftereffects of 9/11 on American Muslims. Of those he surveyed, he found that a majority experienced negative events, such as verbal harassment and increased airport security checks.

We had much more on the ways 9/11 shaped America in the past decade on Sunday’s NewsHour special “America Remembers 9/11”: