KATOWICE, Poland — Several thousand people gathered Saturday amid a heavy police presence in southern Poland for a “March for Climate” to encourage negotiators at climate talks to set ambitious goals.

Activists from around the world gathered in the main square of the city of Katowice where delegates from almost 200 countries are holding a two-week meeting on curbing climate change.

Some of them were dressed as polar bears, some as orangutans, animals that are facing extinction from man-made global warming and deforestation.

They joined in chants of “Wake up, it’s time to save our home,” and held banners including one reading “Defend our Rights to Food, Land, Water,” as large police units and mounted police looked on.

Earlier Saturday, campaign group Climate Action Network said that one of its employees has been allowed to enter Poland after earlier being stopped by border guards citing unspecified security threats.

The group, an alliance of hundreds of organizations from around the world, said Polish authorities gave Belgium-based activist Zanna Vanrenterghem permission to continue to the U.N. climate summit in Katowice. 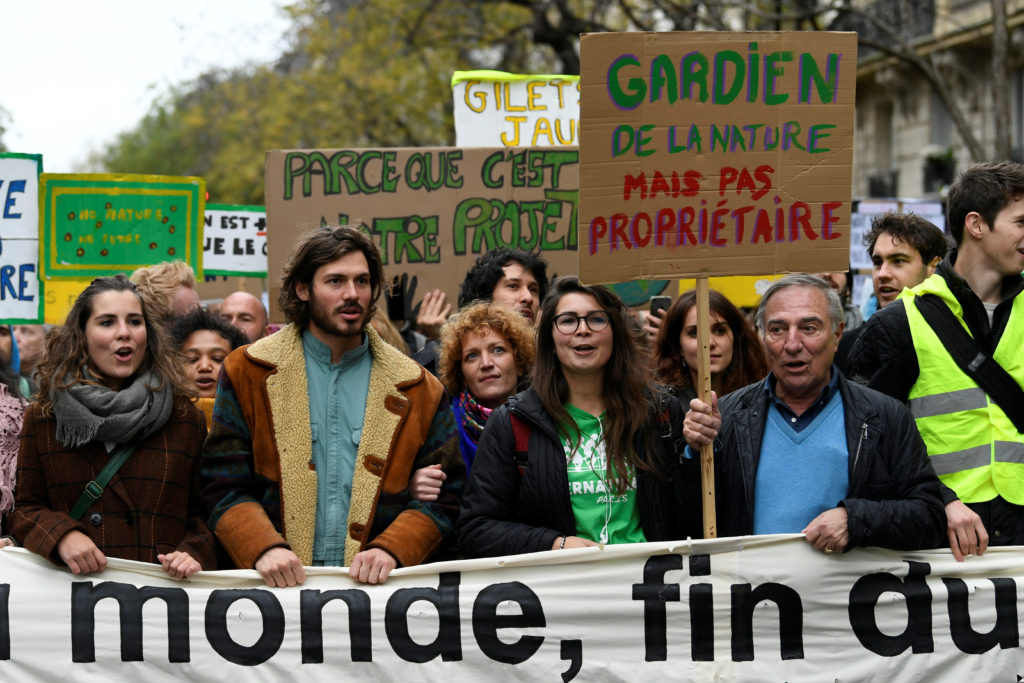 People attend a demonstration to urge politicians to act against climate change in Paris, France, as the COP24 is held in Poland, December 8, 2018. Photo By Piroschka van de Wouw/Reuters

The Belgian ambassador in Poland, Luc Jacobs, said Polish border guards had provided him with no details about the case but confirmed that Vanrenterghem was admitted into Poland overnight.

CAN had no immediate information about 12 other activists deported or denied entry to Poland in recent days. Poland introduced temporary random identity checks ahead of the conference, arguing they were needed for security.

Left: Protesters take part in the March for the Climate on the streets of Katowice, where the COP24 UN Climate Change Conference 2018 is held, Poland December 8, 2018. Photo by Agencja Gazeta via Reuters