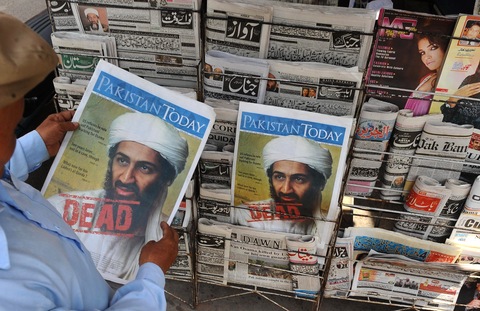 In an interview with Steve Kroft for this Sunday’s 60 Minutes, President Obama says he won’t release post-mortem images of Osama Bin Laden taken to prove his death.

“It is important to make sure that very graphic photos of somebody who was shot in the head are not floating around as an incitement to additional violence or as a propaganda tool,” President Obama said in the interview.

The White House had been considering whether to let a photo out, in part to offer proof of bin Laden’s death in a raid on his compound. However, White House Press spokesman Jay Carney called the photo “gruesome” and could prove to be inflammatory.

In Wednesday’s White House press briefing, Carney read from a transcript of the president’s interview with “60 Minutes,” in which the president said “We don’t trot out this stuff as trophies” and “We don’t need to spike the football.”

“The risks of release outweigh the benefits,” he said. “Conspiracy theorists around the world will just claim the photos are doctored anyway, and there is a real risk that releasing the photos will only serve to inflame public opinion in the Middle East.”

“Imagine how the American people would react if Al Qaeda killed one of our troops or military leaders, and put photos of the body on the internet,” he continued. “Osama bin Laden is not a trophy – he is dead and let’s now focus on continuing the fight until Al Qaida has been eliminated.”

CIA Director Leon Panetta, who appeared on Tuesday’s NewsHour, even told news organizations late Tuesday that he thought a photo would be released.

Original post | The Obama administration continues to debate whether to release graphic images of Osama bin Laden’s corpse in order to end doubts that the former al-Qaida leader is dead.

Many in the administration are concerned the move could further fuel anti-U.S. sentiment.

CIA Director Leon Panetta has said in media interviews that at least one photo is likely to be released. He added, however, “I don’t think you have to convince the world because of the DNA and all of the other proof that we have.”

Watch Panetta’s interview with the NewsHour’s Jim Lehrer on the tense moments leading up to the raid on bin Laden’s compound.

The chairman of the House Intelligence Committee, Rep. Mike Rogers, R-Mich., said on ABC’s “Good Morning America” that he was concerned that the photo could be seen as a “trophy” that inflames U.S. critics.

“Conspiracy theorists are going to see the pictures and find 10 reasons why they think it’s someone else,” Rep. Rogers said. “I don’t know what we gain by showing this picture.”

On Capitol Hill, tensions continue to rise over U.S. relations with Pakistan, specifically over whether Pakistan had knowledge of or was protecting bin Laden. Several Republicans and Democrats in Congress have raised the possibility of cutting off aid to Pakistan.

The Pakistani government has denied suggestions that its security forces knew anything about bin Laden’s hideout.

And new details continue to emerge about the raid itself. Politico reports that bin Laden had 500 Euros in cash and two telephone numbers sewn into his clothing – presumably a sign that he was ready to flee at a moment’s notice.

We’ll be tracking developments here on the Rundown and on Wednesday’s NewsHour. Browse our full coverage on bin Laden here.