How U.S. hospitals cleaned up their toxic trash

It was an ironic discovery: Medical centers designed to treat patients could actually be harming them. In 1994, the Environmental Protection Agency released a report that found that incinerators used by many hospitals throughout the United States were a top of emitter of harmful air pollutants, including mercury and dioxin.

For environmental activist Gary Cohen, it was a wake-up call that hospitals needed to rethink their environmental footprint, especially since health care is “the one sector of our economy that has healing as its mission.”

Ten years earlier, Cohen had seen from afar the devastating effects of an accident with harmful air pollutants at a pesticide plant in Bhopal, India. Some 600,000 people were exposed to a highly toxic gas and at least 3,800 individuals in the surrounding area died as a result. The disaster caused health complications and premature death for thousands more.

Back in the U.S., “Everyone was asking, could this happen here?” Cohen recalled.

According to Cohen, American hospitals have been subject to the same economic forces that pushed many industries to adopt less sustainable practices over the last century. By the 1980s, the share of plastics in medical waste had increased from 10 percent to 30 percent over the previous decade. Oftentimes, these plastics ended up in red-bag waste designated for bio-hazardous materials and thrown into incinerators.

So in 1996, Cohen founded the organization Health Care Without Harm with the goal of persuading hospitals to adopt more sustainable waste management practices.

Cohen began approaching members of the U.S. health care sector — including facilities managers, nurses, and other staff that dealt with waste stream management — in hopes of convincing them to reconsider how they disposed of waste. Many, including major professional associations, were reluctant to consider the change, especially since it would require large costs up front.

But Cohen said he and his partners persisted, telling organizations, “‘You can’t poison your neighbors in the service of healing them. You have to align with the Hippocratic Oath that your industry is grounded in.’”

His team tried to demonstrate that much of the potentially infectious waste could be reduced by reusing, reprocessing, and recycling, and that alternative technologies could work just as well at killing pathogens as incinerators.

Gradually, health care providers realized that making sustainable changes — such as switching to machines called autoclaves to sterilize hazardous waste — could be cost-effective in the long run. Health Care Without Harm eventually got the support of the American Hospital Association, the Environmental Protection Agency and the American Nurses’ Association. As the organization grew, it expanded its partnerships with cities, NGOs, and other health institutions, supporting initiatives such as Chicago’s Green Healthcare and later establishing the Health Care Climate Council.

When Health Care Without Harm started, there were some 4,500 medical incinerators in the United States. As of 2010, there were only 57, according to an EPA report.

Yet sustainability is rarely the first thing on caregivers’ minds when working with sick patients, said Eric Bashaw, director of environmental compliance for one of Health Care Without Harm’s partners, Gundersen Health.

“My mom has been a nurse 45 years,” Bashaw said, and she once jokingly warned him, “If you make this job any more complicated, I’ll disown you.”

Gundersen Health started developing a sustainable waste management system for health care centers throughout the Midwest in 2009 in order to take the onus off busy medical professionals: Rather than have nurses and doctors sort the waste themselves, they sent out team members to pick up waste, sort it, and dispose of it in the most environmentally friendly way.

Gundersen says it spent less than $10,000 on hazardous waste disposal in 2015 — down from $151,000 in 2009 — at hospitals throughout Iowa, Minnesota and Wisconsin. They diverted 345 pounds of controlled pharmaceutical waste from sewer systems within the first six months of that year.

The Mayo Clinic in Minnesota and the Cleveland Clinic have both been part of the wider effort to make significant changes to hospital waste management systems. Cleveland Clinic facilities stopped using incinerators 10 years ago in favor of steam-processing treatments.

Jon Utech, senior director of Cleveland Clinic’s Office for a Healthy Environment, said they’re constantly working to get the market to respond to demands for more sustainable waste practices. “We try to push on supply chain partners to make the products they provide for us more and more recyclable,” he said.

These efforts grew as attention by the government to the issue also rose. In 1997, the EPA released new emissions guidelines for hospitals to adhere to regarding medical waste incinerators. Cohen said these regulations, combined with required dioxin testing, made using incinerators more expensive “and helped support alternative strategies to deal with medical waste.”

Philip Landrigan, an epidemiologist at Mount Sinai in New York City who has studied pollution and its causes extensively, said the organization has been amazingly effective. “Twenty years ago, hospitals just threw everything in red bag waste.” Now, said Landrigan, “Almost every American hospital is burning less waste than they used to.”

Waste at hospitals around the world

Sustainability is not yet a priority in developing countries that lack any medical waste management systems to begin with, Landrigan noted.

In Nepal, hospitals were simply throwing waste out in the streets; those who handled the trash were vulnerable to needle stick injuries and other medical hazards. Mahesh Nakarmi, an engineer in Nepal who headed up these waste management projects, said that Health Care Without Harm worked with local medical institutions to implement waste segregation systems, and install autoclaves.

Bir Hospital in Kathmandu taught its staff how to separate and process waste. By 2012, the hospital was recycling 79 percent of its waste, a portion of which was made available to scrap dealers to sell.

Ruth Stringer, who directs Health Care Without Harm’s international efforts, said that for many developing countries, the safest and cheapest ways of treating waste also happen to be the most sustainable.

But since these countries’ health care infrastructures are generally more at risk when public health crises hit — like in the Democratic Republic of the Congo, which is currently experiencing the second-worst Ebola crisis in recent history — it’s imperative for hospitals to consider sustainability and have systems in place in advance. “When they do, it can be very effective,” said Stringer. 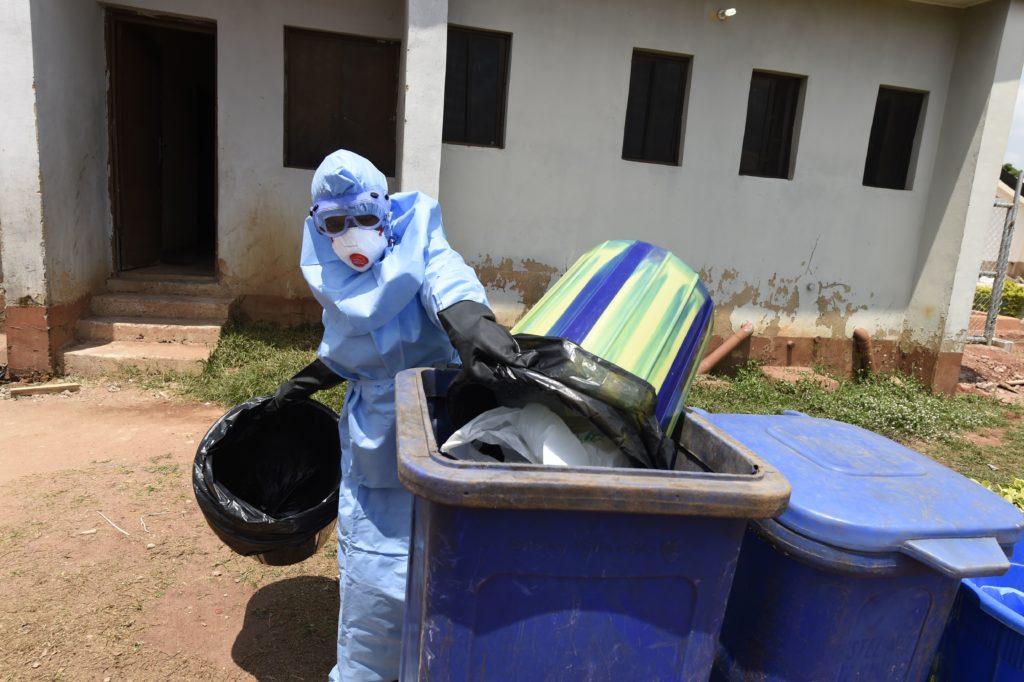 When a magnitude 7.8 earthquake hit Nepal in 2015, the hospitals already had adopted safe, sustainable practices. “The amount of waste went up three-fold, and the system coped,” Stringer said. “And that’s partly because it was a well-designed system, and the workers that trained were proud of what they did.” Mahesh Nakarmi, an engineer in Nepal who headed up these waste management projects, echoed Stringer’s comments.

Still, developing countries are not the main contributors to medical waste, as their facilities are much less sophisticated than those of Western countries. American hospitals may have become less reliant on polluting incinerators, but they still contribute about 8 percent of the greenhouse gas emissions produced overall in the U.S. As of 2012, health was the second most energy-consuming sector in the U.S., after food service.

Cohen hopes that looking forward, hospitals will think carefully not just how they dispose of waste, but how all their actions contribute to a carbon footprint overall. “It’s no longer sufficient to just be concerned with individual healing,” he said. “I think health care needs to see its mission in a broader way.”

Left: A man is transported to the hospital in the aftermath of Hurricane Florence in Kinston, North Carolina, on Sept. 19, 2018. File photo by REUTERS/Eduardo Munoz