An American humanitarian worker goes on trial in Cairo. What’s next for Aya Hijazi?

Updated on April 18 | Aya Hijazi was cleared of the charges on Sunday.

In May 2014, Aya Hijazi, a 29-year-old Egyptian-American humanitarian worker, was imprisoned in Egypt. For more than two years, she was held in what’s known as “pre-trial detention” before her trial finally began last month.

Hijazi (also sometimes spelled Hegazy) ran a Cairo-based NGO called the Belady Foundation that provided resources and counseling to abandoned or runaway children. She was detained with her husband, the group’s co-founder, and six others on accusations that they physically and sexually abused the children, and included the children in anti-government protests.

At the time of her imprisonment, President Abdel-Fattah el-Sisi was consolidating power and cracking down on political dissent after a military coup had toppled the previous elected government.

Michele Dunne, a senior associate with the Carnegie Endowment for International Peace, said she believes the case is fabricated and “100 percent political,” even though Hijazi wasn’t known as a prominent activist.

“It’s difficult to penetrate the logic here, and sometimes it’s not as carefully planned as one might think,” Dunne said.

Hijazi’s trial began on Nov. 17. As is customary in Egyptian court, Aya and her co-defendants were penned in a large cage on one side of the crowded courtroom — a huddled mass of all-white prison uniforms. Representatives of the U.S Embassy in Egypt were there as observers and also attended the seven pre-trial hearings leading up to her trial.

Each of these pre-trial hearings, however, was adjourned nearly as soon as they began. One ended early because the prosecution’s expert witness could not open a laptop; another because the guards were late escorting the defendants into court on time. 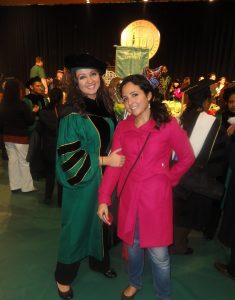 Aya Hijazi (right) with sister Alaa in an undated photo before she was imprisoned.

Long trials are not unusual in Egypt’s legal system.

“If the prosecutors want to drag this thing on with delay tactics they certainly can,” said Wade McMullen, an attorney with the Robert F. Kennedy Center, a human rights non-profit that has taken on Hijazi’s case.

“I think anyone would be interested to get to the bottom of accusations related to minors and related to abuse. So I would challenge the issue of bogus accusations,” he said. “There is no interference in the judicial system. Respect for it is warranted.”

Shoukry is in Washington, D.C., this week, concluding a series of meetings with U.S officials. On Wednesday, Nov. 30, he had a lengthy meeting with Vice President-elect Mike Pence, marking the first time an Arab leader has met in person with a member of the new administration. Shoukry also sat down with House Speaker Paul Ryan, members of Congress and Secretary of State John Kerry.

When asked by Warner whether the issue of human rights in Egypt was brought up by Pence during their meeting, Shoukry said, “It wasn’t raised specifically.”

U.S military aid to Egypt — worth $1.3 billion annually — was suspended in 2013 when a military coup deposed elected leader Mohamed Morsi. After his ouster, security forces began a bloody crackdown on The Muslim Brotherhood including the killing of more than 1,000 of Morsi’s supporters at a sit-in known collectively as the Rabaa massacre.

Hijazi’s case was discussed during Shoukry’s meeting with the Senate Committee on Foreign Relations by Maryland Sen. Ben Cardin, according to a statement from his office.

“I asked Foreign Minister Shoukry to look into the ongoing detention and trial of Egyptian-American Aya Hijazi, who has been unfairly imprisoned by Egyptian authorities since May 2014,” Cardin said in the statement. “Many of my bipartisan colleagues and I are closely following Ms. Hijazi’s case and hope that is resolved in a fair and expeditious manner, and that she is released as soon as possible.”

And Sen. Tim Kaine, who has been working behind the scenes to secure Hijazi’s release but did not meet with Shoukry on this latest visit to Washington, said in an email statement provided to the NewsHour, “I am concerned both from a human rights perspective, as Aya’s case is representative of Egypt’s larger crackdown on NGO and civil society groups and also because Aya is an American citizen and a Virginian. As a U.S. Senator, my highest priority is the security and safety of the people I represent. I expect a new Administration to have this same charge – to safeguard all Americans – and I remain hopeful that Aya’s case will be resolved expeditiously, that the charges against her will be dropped, and that she can soon return home to her family.”

As a New York Times article that touches on Hijazi’s case illustrates, there are distinct challenges when an American (Hijazi has dual citizenship) is imprisoned by a U.S ally. It is paradoxically more complicated and diplomatically delicate than when an enemy state does the same. The family of the imprisoned must grapple with hard choices and delicate winds of timing. And for Hijazi’s case, the timing was particularly bad.

In September 2016, the Hijazi family met with Samantha Power, Washington’s U.N. ambassador, and Avril Haines, one of President Obama’s national security advisers, who “reiterated the president’s deep concern for the welfare of all American citizens held abroad,” according to a White House statement.

But now, Hijazi’s chances at freedom are on hold, stuck between two countries currently consumed with other matters. In Egypt, the economy is convulsing from a devalued currency, lack of foreign dollars and widespread food shortages like sugar. In the United States, the election of Donald Trump has launched an outsider into the White House, and it is still unclear how he will operate on the world stage or where cases like Hijazi’s or human rights fall on his agenda. Vice President-elect Mike Pence did not respond to a request for comment.

President Sisi was the first world leader to call President-elect Trump after his victory. The conversation, judging from Sisi’s post-call statement, was light and celebratory. Secretary of State John Kerry confirmed Sunday that neither President-elect Trump nor his transition team consulted the State Department or utilized their briefings ahead of his calls with foreign leaders like Sisi.

For the Hijazi family and those advocating for her release, that is a cause for concern.

“To our knowledge, the president-elect has yet to utter a single word of concern about Aya Hijazi, an American humanitarian who has been unlawfully detained in Egypt for over two and a half years,” McMullen said in a telephone interview with PBS NewsHour.

Hijazi’s next hearing is scheduled for Dec. 17.

Left: Aya Hijazi in the center. Photo courtesy of the Belady Foundation