As long as there have been tombs, there have been tomb raiders. On the night of Jan. 28, 2011, while protests engulfed Egypt’s Tahrir Square, thieves took advantage of the chaos and climbed into the Cairo Museum through the roof. Looters made their way through the museum and damaged two mummies in their search for gold. Luckily, King Tutankhamun’s famous golden mask and other priceless treasures were left untouched, but 110 artifacts were spirited away under the cover of darkness.

But as long as there have been tomb raiders, there have also been tomb protectors. One of the lasting images of the Egyptian revolution is a human chain of soldiers and residents surrounding the Egyptian Museum in an effort to protect the antiquities that remained.

Instability in the Middle East over the last couple of years has raised concerns about the smuggling of ancient artifacts and the reach of cultural racketeering. Plus, the price of antiquities has soared over the past decade. A 14-inch tall bronze Egyptian cat cast from the first or second century B.C., for example, sold in 2013 at Christie’s auction house in New York City for more than $2 million — well beyond the $250,000 maximum expected.  Prices like this have fueled the underground market demand for such goods.

A historic agreement was signed last week between the United States and Egypt in the State Department’s Treaty Room. It marks the first so-called “cultural property agreement” between the United States and any country in the Middle East and North Africa region. The agreement lays the groundwork for the U.S. to impose import restrictions on Egyptian archaeological items dating from 5200 B.C. through 1517 A.D. The goal: to reduce the incentive to traffic such items.

Deborah Lehr, founder of the Washington, D.C.-based Antiquities Coalition, has been working hard over the last few years behind the scenes with Egyptian and American government officials to help bring the agreement to fruition.

One central element of the agreement is that it changes the burden of proof. For example, until now, Egypt has had to prove an item was looted. With the MOU in place, the burden is now on the seller to prove that it wasn’t looted and that there is a solid paper trail tracing the journey from Egypt to their hands, including a valid export license.

Secretary of State John Kerry said this “represents the first agreement in the Middle East or North Africa regarding the protection of antiquities” and called it “groundbreaking.”

The agreement lays the groundwork for the U.S. to impose import restrictions on Egyptian archaeological items.

“I think it’s a good moment for Egypt, the United States, for the region, for us to make it clear that these antiquities are priceless treasures that do not belong to traffickers and crooks and should not be sold illegally and bought by wealthy people to hide away somewhere,” Kerry said. “They are the antiquities that belong to the world, that have been protected and should be protected by an old civilization.”

Egyptian Foreign Minister Sameh Shoukry said he hopes that the agreement “becomes a road map for the protection of these antiquities to preserve them for generations to come and to preserve them against the treachery of those who want to destroy them and to wipe out this commonality of our humanity.”

Egyptian antiquities were not all that popular before the 1970s, but prices have been rising astronomically in the last 10 years, said egyptologist Salima Ikram.

“Everything has its vogue,” she said.

The reason that the 14-inch tall bronze Egyptian cat was able to fetch such a high price was the documentation or provenance. Christie’s was able to show that the item had been owned by former Egyptian statesman Nubar Pasha Nubarian, and in Paris since 1895. Dates matter, because the United Nations Educational, Scientific, and Cultural Organization (UNESCO) Convention on the Means of Prohibiting and Preventing the Illicit Import, Export and Transfer of Ownership of Cultural Property of 1970 called on signatories to better protect their cultural heritage and halt illegal excavation, import and export of antiquities. 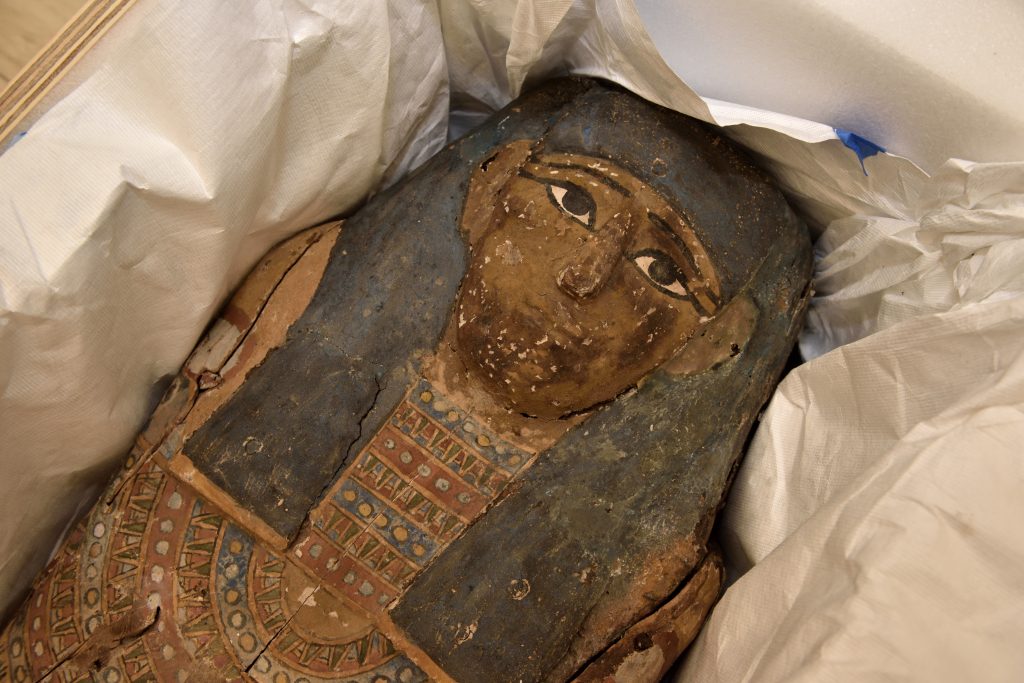 Egyptian sarcophagus that had been captured in U.S. Customs in 2013, estimated to be Late Period. Photo by Ken Garrett/National Geographic

In a statement emailed to the PBS NewsHour, Christie’s said that the looting of archaeological sites is a major concern in the art world and that property looted and trafficked from conflict zones cannot be sold in the open market.

“When handling works of antiquity or any work of art, Christie’s adheres to any and all local and international laws related to cultural property and patrimony,” the statement said. “We have strict procedures in place to help to ensure we only offer works of art which are entitled to sell and, as a part of that due diligence, we work closely in partnership with UNESCO, as well as Interpol, U.S. Department of Homeland Security and Scotland Yard’s Art and Antiques Unit.”

Just last week, U.S. Immigration and Customs Enforcement (ICE) repatriated five illegally smuggled ancient artifacts to the government of Egypt at a ceremony at the Egyptian Embassy in Washington. The artifacts were uncovered during investigations by ICE’s Homeland Security Investigations called “Operation Mummy’s Curse” and “Operation Mummy’s Hand,” named for an operation that located a genuine mummy hand disguised as a movie prop.

In a statement released on Dec. 1, ICE said the investigation has identified “a criminal network of smugglers, importers, money launderers, restorers and purchasers who used illegal methods to avoid detection as these items entered the United States. Items and funds were traced back to Egypt, the United Arab Emirates, the United Kingdom, Iraq, France, and other nations” and has secured “four indictments, two convictions, 19 search warrants, and 16 seizures totaling approximately $3 million. The agency is also seeking an international fugitive involved in the case.”

Some of the finds include a sarcophagus retrieved from a garage in Brooklyn and a shipment of smuggled Egyptian goods including a funerary boat model and figurines. 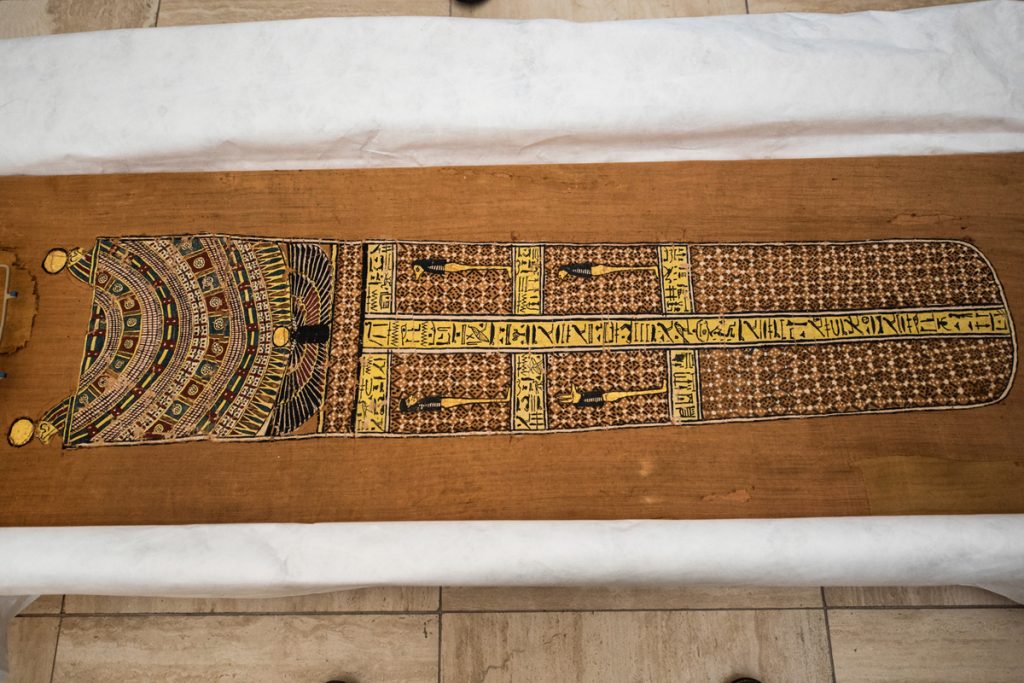 On Sept. 8, 2009, HSI New York recovered a nesting sarcophagus from a garage in Brooklyn, New York. One year later, on Sept. 24, 2010, following leads from the Brooklyn case, U.S. Customs and Border Protection officers at Newark seized a shipment of smuggled Egyptian goods, including a funerary boat model and figurines. This is part of the collection of artifacts that was repatriated back to Egypt on Dec. 1, 2016. Photo courtesy U.S. Immigration and Customs Enforcement

“Each of the artifacts returned today tells a story, a human story, our story, Shoukry said at the repatriation ceremony. “History comes alive when someone is able to not only read about the past, but is also able to visit the historical sites, watch and enjoy the artifacts, appreciate the images and see the actual writings of our ancestors.”

She adds that if demand for Egyptian antiquities continues to rise and the crime rings are not stopped, sales could move from legitimate auction houses to the private market, a move that will make it hard to recover lost treasures.

“Once something goes, part of everyone’s past is destroyed,” she said. “It affects all of human history and our understanding of the past. It is everyone’s loss and one’s person’s gain.”

In the meantime in London, it’s Classic Week at Christie’s. One of the items for sale is this four-inch tall Egyptian cat statue with earrings. Ikram has a specialty in animals and the afterlife in ancient Egypt.

“It is rare,” she said, “to have such beautiful bronzes for sale. They were offerings to the cat-headed goddess, Bastet, protector of children, women, and promoter of love. Often mummified cats were placed within the bronzes or within the base that supported the statue.”

The top-selling piece in the category of antiquities was a large Egyptian bronze that represents the ancient Egyptian Gods Isis And Horus, and dates to 747-656 B.C. It sold for $1,382,290, solidly topping the estimate of $355,000.

NOTE: The U.S. now has bilateral agreements with 16 countries around the world, as well as emergency import restrictions on cultural property from two other countries, Iraq and Syria.

Left: Egyptians artifacts that had been captured in U.S. Customs in 2013, all estimated to be Late Period. Photo by Ken Garrett/National Geographic