Column: Here’s what I learned from 3 years reporting in Iraq

Videographer Alessandro Pavone has been reporting in Iraq for the past three years since the Islamic State group took control of the Northern city of Mosul in the summer of 2014. He recounts some of the key moments on the front lines.

I was on assignment in Afghanistan when Mosul fell to the Islamic State group in the summer of 2014. I had almost no access to Internet during the day and I wasn’t really following the news. Out of the blue, my editor called: “Pack your gear, we need you in Erbil tomorrow.” I had never been to Iraq before, and I had no idea what I was getting into. 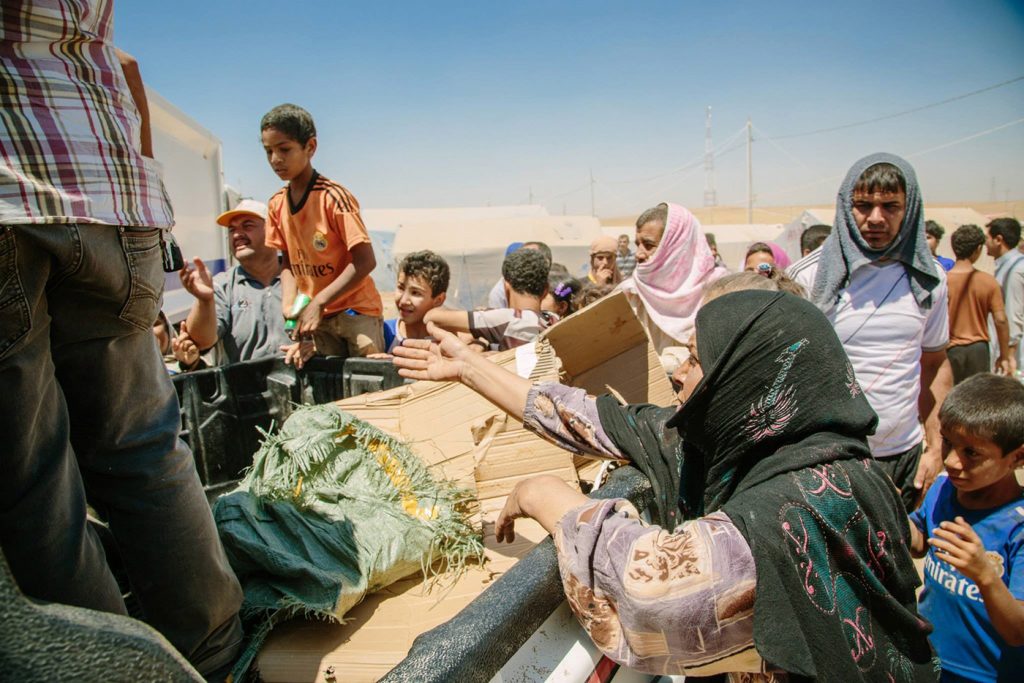 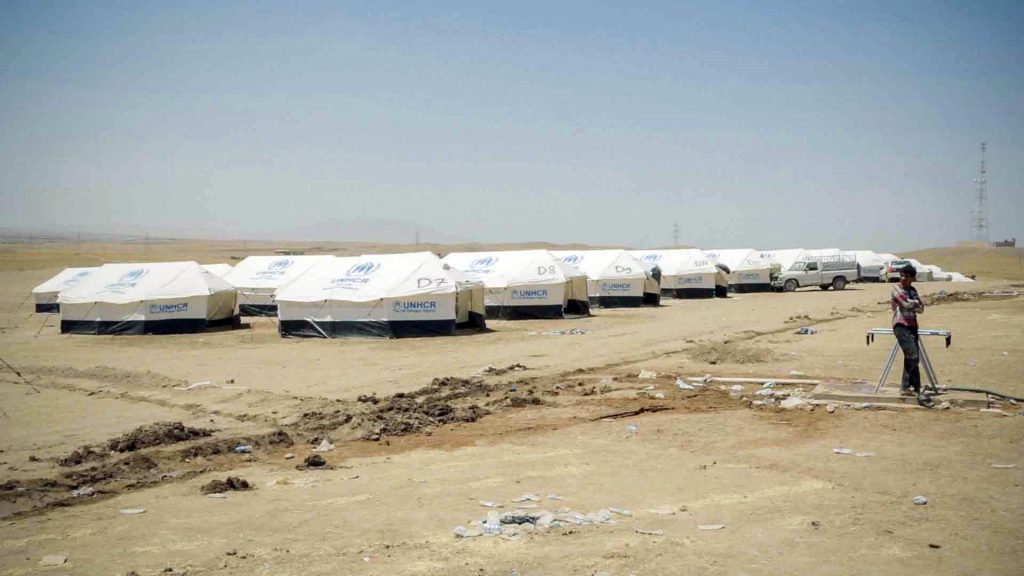 My first encounter with the frontline happened near a camp for displaced people in Kalak, right at the checkpoint with the autonomous Kurdish province. After few kilometers is the so-called caliphate — Islamic State territory. Some came on foot, others by car. I remember hundreds of people crossing the desert lands of the Nineveh planes carrying nothing but the clothes they were wearing and the few things they could grab from their homes.

Every single building inside the old city has been destroyed. We have to move forward inside tunnels made by ISIS.

From the summer of 2014 until August 2017 I have been frequently traveling to KRG, the semi-autonomous Kurdish region in Northern Iraq, to film the perils and struggles of Iraqi families trying to survive after escaping death. About 500,000 people have fled their homes since the battle started. Most of them have no family to shelter them. 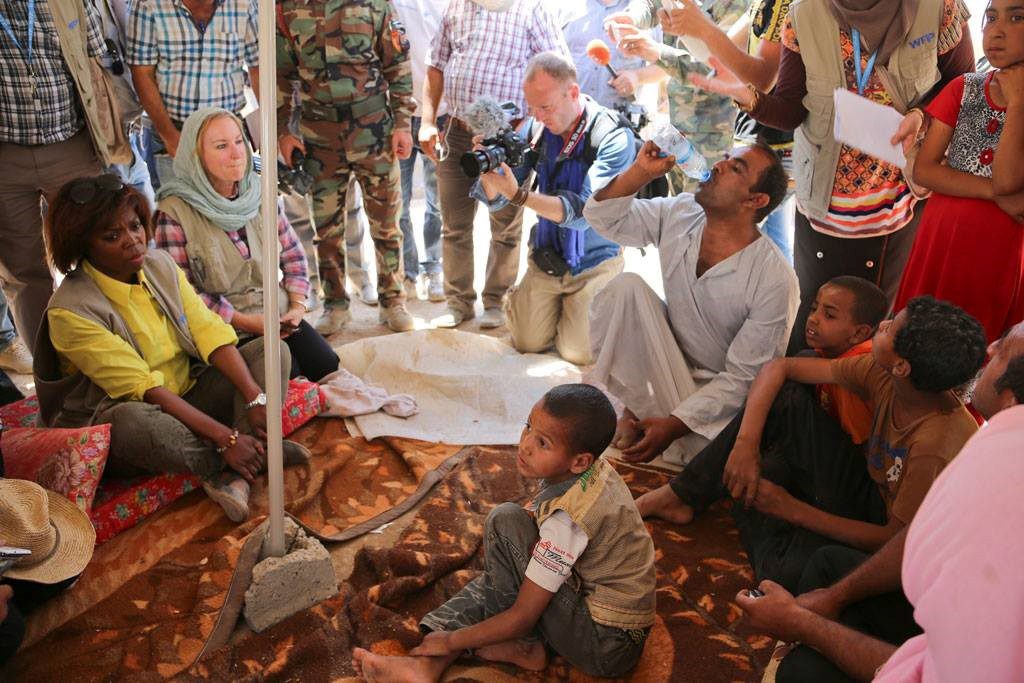 Kalak is one of the biggest makeshift camps I have visited. The setup is always the same: clothes hanging outside the tents, families of 10, sometimes 15 people, sleeping or just lying on the bare floor. It’s simply too hot to do much else. At midday, temperatures reach 120 degrees Fahrenheit. Sometimes it is so hot that even my video equipment refuses to work, and I can barely operate my camera because the metal parts are burning. 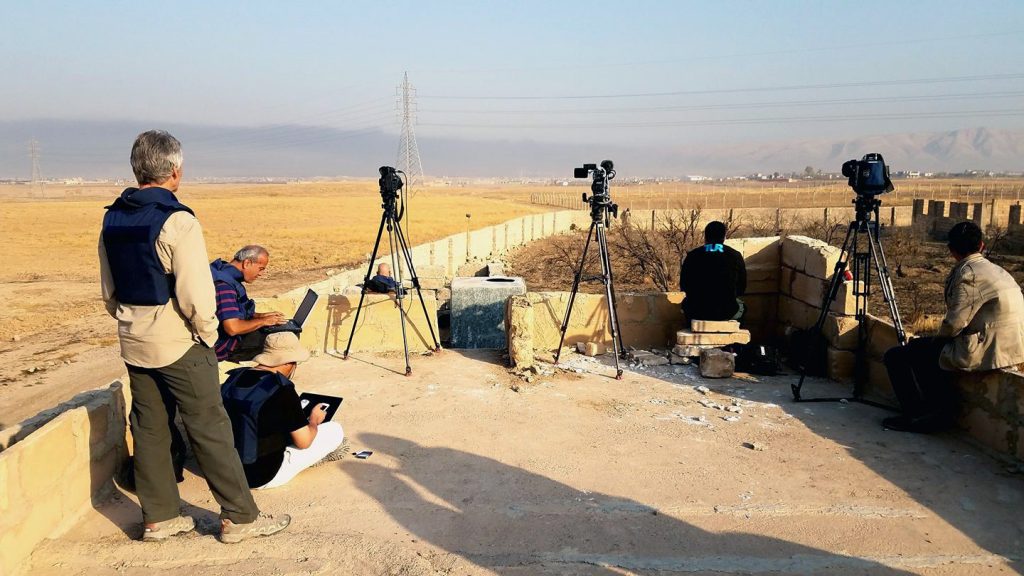 Photo of Bashiqa, Iraq, in November 2016 by Alessandro Pavone

After delays and delays, the offensive for Mosul finally began in spring 2016. Hundreds of international TV crews rushed to Erbil to film Kurdish and Iraqi forces advancing toward Mosul. The battle quickly becomes a TV set: reckless Kurdish camera teams driving a mobile studio track in between tanks, hipster correspondents armed with selfie-sticks going live on Instagram and Snapchat from the frontline, drones flying all over, Iraqi soldiers taking selfies with exotic western TV correspondents. At some point, bullets were passing over our heads on the top of this roof near the Kurdish town of Bashiqa, and we started to film each other ducking for cover.

READ MORE: Long-awaited battle to take back Mosul from ISIS will be toughest yet

The battle is brutal. ISIS snipers hidden on every corner inside Mosul target any moving human beings: soldiers, civilians and journalists. You try to quickly take cover, and you might step on one of the thousands of land mines the soldiers of the caliphate have placed all over the city. 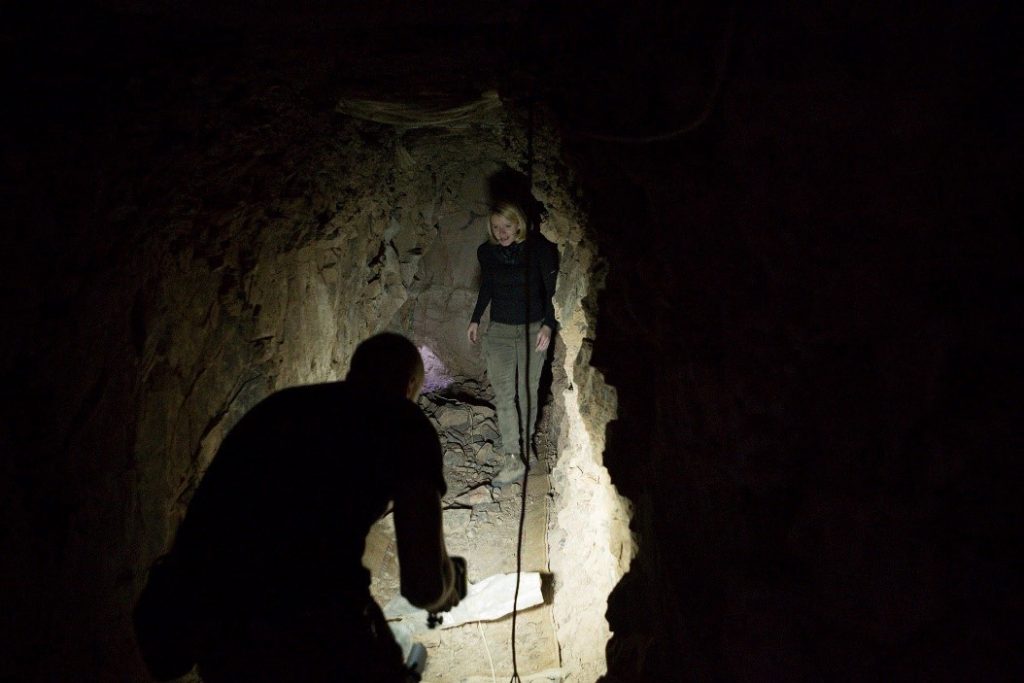 You never know what to expect from day to day when reporting in Iraq. Photo by Matt Cetti-Roberts

Special correspondent Jane Ferguson and I were embedded with the Iraqi armies on a number of operations. Due to our limited budget, we couldn’t afford a field producer, and we had to roll with what we could find every day. After waiting and waiting to join a military operation, I was always scared when the moment came, and the Army officers would yell, “Yalla, yalla! (Go, Go!) Get inside the armored vehicle, we are going inside Mosul.” It was like Russian roulette, you never knew what you would get. And I will never forget those moments when the operations were over and we were finally back to the military bases safe and sound. The stress was gone, just waiting for the next day. 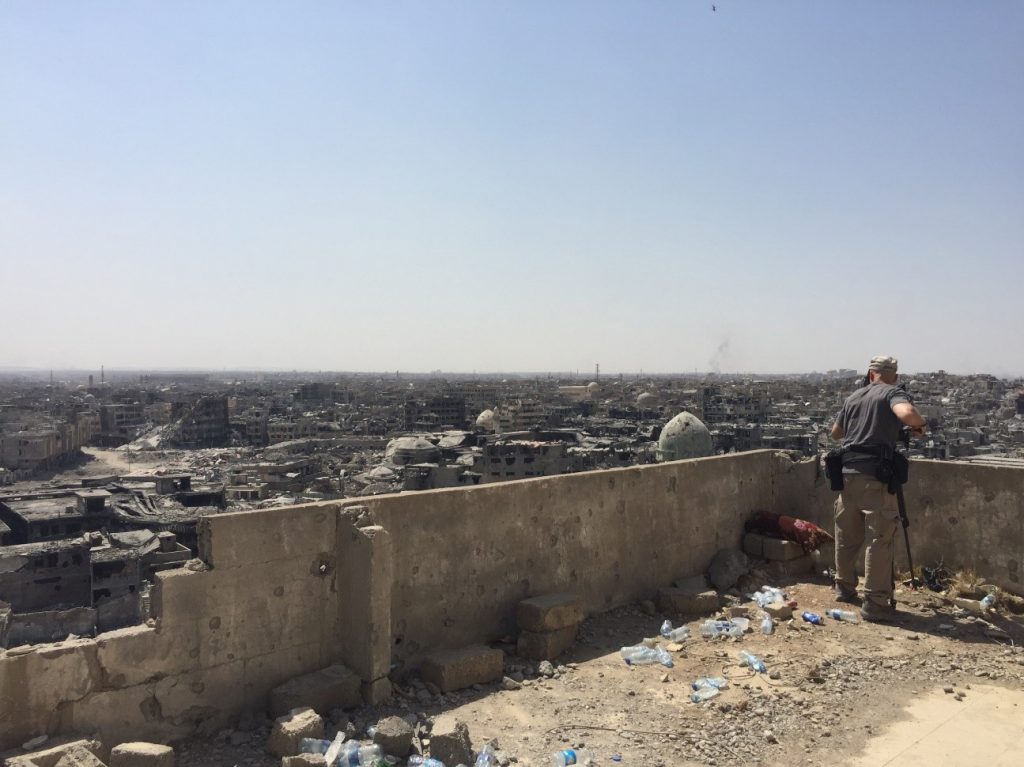 Photo of Mosul in July 2017 by Marcia Biggs

The last days of the battle for the old city were probably the toughest ones. Temperatures reached 110 degrees Fahrenheit, the streets were too narrow, and armored vehicles couldn’t be of much use anymore. The fight turned into urban warfare, and the Iraqi army started to escort TV crews to the front line on foot patrols. Every single building inside the old city has been destroyed. We have to move forward inside tunnels made by ISIS. It’s a somber and sinister scenario: the smell of dead bodies left behind the front lines is unbearable. The only sign of life left is desperate families, reduced to skeletons due to starvation, trying to leave the old city. 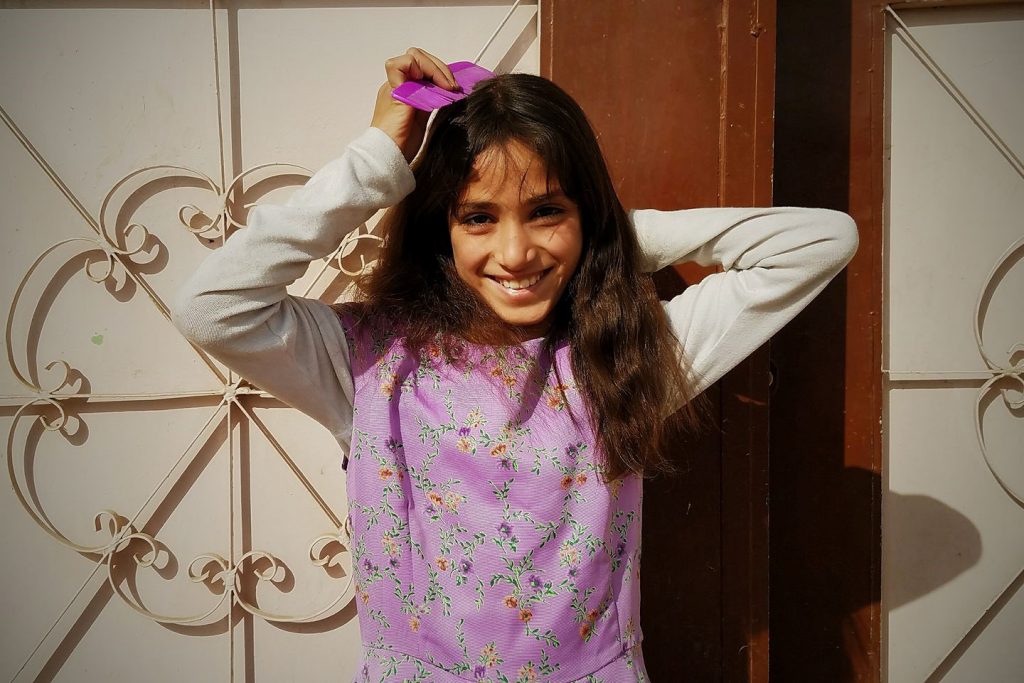 Photo of Mosul in February 2017 by Alessandro Pavone

After almost nine months, the war is over, and ISIS has been defeated. Life in Mosul is starting to go back to normal. Shops and markets are open again, young students are going back to schools and universities — or what is left of them after heavy bombardments almost destroyed every building inside the city. The new threat now is to be hugged by local residents eager to take selfies with you. Only few weeks ago, they could risk their lives just for having a phone in their hands. But deep down I believe this is only the beginning of a new bloody chapter of this battle.

The violence and brutality my colleagues and I had the privilege of witnessing will never disappear from our minds. I have been reporting from other conflict countries, but I have never seen anything like this before. Too many people died for no reason, too many families were torn apart. And now some Iraqis feel it is time for revenge. I know I will be back again and again.

Left: Photo of Mosul in February 2017 by Arshed Baghdadi

Alessandro Pavone is a freelance videographer and producer.