Analysis: What Alexey Navalny means for Russia in 2021

By now, you may recognize the name Alexey Navalny – the Russian opposition leader whose arrest on Jan. 17 prompted a wave of protests across Russia.

Navalny was jailed when he returned to Moscow after recovering from a near-fatal poisoning that he (and a number of Western governments) say was caused by the chemical nerve agent Novichok.

Tens of thousands of Russians across more than 100 cities took to the streets on Saturday to demand Navalny’s release. According to one poll, four out of 10 of them had never demonstrated before. A record 4,000 protestors were detained. Even as the police warned against attending the unsanctioned demonstrations and the temperature fell to -58 degrees Fahrenheit in some cities, Russians staged their largest protests in at least three years. The show of support and Navalny’s newfound recognition is Russia’s biggest political development of the year, and the anger beneath it could bubble and reverberate for months, even years to come, with parliamentary elections and a presidential race looming.

What led to this moment

When I spent time with him 10 years ago, Navalny was just beginning his self-appointed career as an anti-corruption crusader; an activist investor of sorts without the wealth or influence of his Western counterparts. He was almost unknown outside liberal circles in the Russian capital. I recall how struck I was as I followed him down a Moscow street and a supporter stopped to thank him. By 2017, when Navalny was campaigning ahead of Russia’s 2018 presidential election, it was clear the more politically-minded Navalny was gaining traction. Despite having been barred from the 2018 ballot because of a criminal conviction that he and the European Court for Human Rights say was politically motivated, crowds of mostly young supporters came to listen to Navalny rail against life under Vladimir Putin, the only president they’d ever known.

The show of support and Navalny’s newfound recognition is Russia’s biggest political development of the year.

Navalny was never allowed to run against Vladimir Putin and has focused his energy on what he calls “smart voting”, an initiative designed to encourage Russians to tactically vote for the candidate who is most likely to win and not part of the ruling party, United Russia. Last August, while visiting the Siberian city of Tomsk, where one of his allies had won a seat in local government through the initiative, Navalny was poisoned, hospitalized and medevaced to Germany. 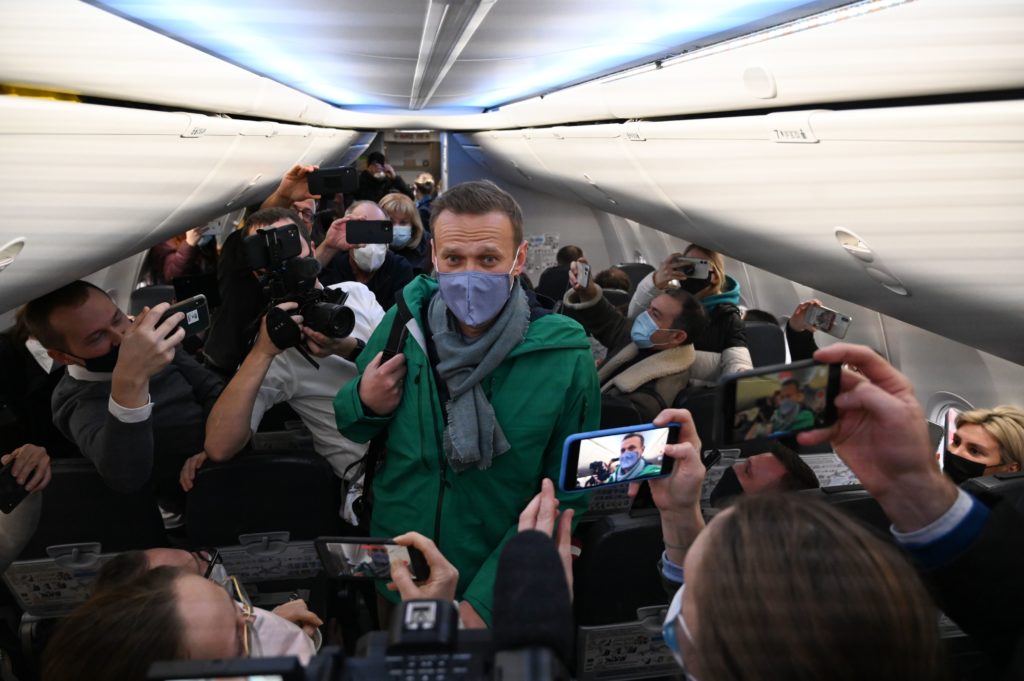 Navalny walks to take his seat in a Pobeda airlines plane heading to Moscow before take-off from Berlin, on January 17, 2021. Photo by Kirill Kudryavtsev/AFP/Getty Images

A day after his latest arrest, Navalny’s team released a video in which he alleges that President Vladimir Putin has a palace worth more than a billion dollars built with bribes. On Monday, Putin denied he owns the mansion, or has watched Navalny’s “boring” YouTube video, but over 100 million people have, a number greater than Russia’s entire workforce (Russia has a population of 146 million.) While there are many Russians who aren’t going to protest on behalf of Navalny, they appear to be ready to lend him an ear on their laptops. Navalny has become a household name, an achievement for a man who is banned from Kremlin-controlled airwaves, and who Putin even refuses to refer to by name. At the G20 Summit in Hamburg, Germany, I asked the Russian president, why? He dismissively told me, “I think we can have a dialogue with people who offer a constructive agenda … but if we’re talking about just attracting attention to yourself, that’s not interesting for dialogue.”

Russian incomes were already falling on the back of a drop in oil prices and rise in sanctions when the pandemic hit. Navalny’s allegations of corruption threaten to damage Putin’s approval rating already near a record low. Navalny’s early supporters are growing up and a significant contingent of older Russians appears to be joining them.

What happens next?
Saturday’s protest won’t be the last. Navalny’s supporters promise to take to the streets again this coming Sunday and again on Tuesday, the day Navalny is due to appear at a hearing where he faces the prospect of being sentenced to up to three and a half years in prison. Putin’s biggest critic is also facing another trial that could see him sent away for up to another 10 years. Any adverse legal developments will likely prompt more protests. Navalny’s supporters believe the Kremlin will release him if enough people take to the streets. In 2013, Navalny was freed from prison after tens of thousands of supporters demonstrated in Moscow and a court suddenly commuted his sentence.

In September, Russia will hold a parliamentary election. Even more importantly, Russia is due to hold a presidential election in 2024 – allowing Putin to run for a fifth term. If the goal is to keep Navalny behind bars until the current wave of dissent blows over, Navalny may remain locked up for years to come.

Yet while Navalny and his allegations are getting newfound attention, he is not – at least yet – universally loved. One Russian pollster puts his approval rating between 15 and 17 percent. Many Russians are skeptical the opposition leader – given the chance – would bring any real change for the better.

The Kremlin is working hard to keep it that way. While state media used to ignore Navalny, he and his followers are now actively portrayed in a negative light amidst footage of violence – some of which was directed against the police – and controversy over the presence of children at last weekend’s protests.

The authorities have also launched a wide-ranging crackdown on Navalny’s supporters. Friday, they accused one of his closest allies of encouraging minors to take part in unlawful actions, a charge often often used to pursue sex traffickers who recruit children. Authorities also opened criminal cases into others for illegally gathering in violation of COVID-19 restrictions. Many of Navalny’s followers – including his own brother have been detained and the police have conducted an eye watering number of raids in activists’ homes. If that wasn’t enough pressure, Friday, the authorities warned protestors could be charged with rioting, an offense that can carry up to 15 years in prison.

While the actual number of kids present at protests was small (a pollster found that just 4 percent were under 18) and violence against the authorities was incomparable to the force used by the police, Russia’s state-controlled media gives these issues outsized attention. Both sides are now collecting and distributing evidence of each other’s transgressions. Navalny and his struggle with the Kremlin has moved into the limelight. Proceedings in the court of public opinion will now begin.

Covenant aside, there are a number of social norms Russians expect to see observed – even during protests. Video of a policeman kicking a 54-year old bystander in the stomach – a blow that landed her in intensive care – quickly drew widespread condemnation. The policeman, bearing a bouquet of flowers, later visited her in the hospital and apologized.

The authorities videotaped his apology and distributed it to state media, only for her to declare she holds the state responsible and demands an official investigation. Every round of protests (and their suppression) risks more collateral damage and fallout.

If history is a guide, Putin may prevail. Waves of protests have rocked Russia a handful of times in the last decade before fizzling out. The Russian president still has his supporters, many Russians are indifferent and the opposition doesn’t hold many cards. How both sides now act will determine how this one ends.

Left: Russian opposition leader Alexei Navalny stands near law enforcement agents in a hallway of a business centre, which houses the office of his Anti-Corruption Foundation (FBK), in Moscow on December 26, 2019. Photo by Dimitar Dilkoff/AFP via Getty Images