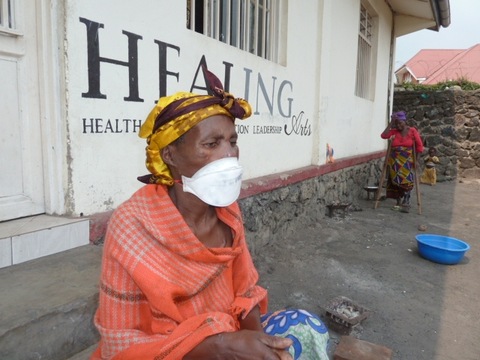 Photo of Anonciata by Fred de Sam Lazaro for the PBS NewsHour.

Few nations are more endowed with mineral resources than the Democratic Republic of Congo and none has endured a more staggering human cost in the scramble for these riches. The death toll from two decades of civil war — 5 million — is second in recent history only to the Holocaust.

Our recent visit to the eastern city of Goma offered a fleeting glimpse of what the United Nations has called the worst place on earth to be a woman. Consider: one of every 10 Congolese women is a victim of rape.

The facilities of HEAL Africa, an aptly, if optimistically, named non-government group is one of the few places women can go for refuge. Here, we ran into a 30-something mother of four named Anonciata, who interrupted a brief tour I was getting from the medical director to plead her case for more surgery.

In 2010, Anonciata’s home was invaded by militiamen, demanding that she track down and hand over her teenaged daughter, who fled as the men approached. Unhappy that she wouldn’t comply, the men beat her to the floor. One of them used a machete to amputate her lips.

Oblivious to our rolling cameras, Anonciata took off the mask that covers her face from the nose down, seizing the unexpected opportunity to consult-mostly plead-with the doctor. In video is too graphic to broadcast or post, out came a litany that’s as familiar to her caregivers as it seems futile. She was feeling pain and, unable to chew, restricted to a fluid diet. She is the first person I’ve ever met who suffers from what the doctors call oral incontinence. The cloth surgical mask is all she has to catch the steady drip of saliva.

Rebuilding her wounds will take extensive surgery, available about once a year when a plastic surgeon visits these facilities. When he was here last, in September, Anonciata had gone to her village and could not be located. Like many others she must wait for his return. Like everyone else, she must reconcile with the limits of Congo’s reality. She may undergo surgery to rebuild her face. She likely will never receive justice.

Anonciata frequently sees the men who maimed her but would never think to report them to authorities. The very thought of the consequences makes her shiver. “They would kill me,” she said.

Amid all this HEAL Africa, moving well beyond the medical imperative that drove its foundation, is pursuing some rape cases; trying help push the embryonic judicial system to deliver, transparently. There are so-called Nehemiah committees, which gather community elders to work locally to contain disputes before they escalate into violence. It is central to the holistic approach and deep Christian faith of the organization’s founders, British-born Lyn Lusi and her Congolese husband, Jo. He’s not the most prolific orthopedic surgeon in all of war-torn eastern Congo, he is the only one, serving a population of 8 million.

“Human beings are basically very, very selfish creatures. And if it goes unchecked it turns into evil,” says Lyn Lusi.

“There is so much evil and so much cruelty, so much selfishness and uh it is like darkness. But if we can bring in some light, the darkness will not overcome the light and that’s where faith is, we believe that.”

The Lusis too must reconcile with limits, taking out “a bucketful here and a bucketful there” out of an ocean of need.