Anti-Austerity Protests Reignite on Streets of Greece and Spain 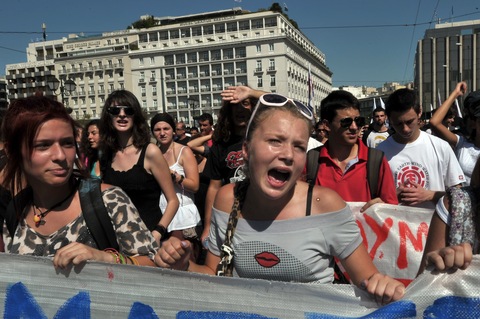 Protesters shout slogans against a new austerity package in front of the Greek parliament in Athens Wednesday. Photo by Louisa Gouliamaki/AFP/GettyImages.

Violent anti-austerity protests have flared across two eurozone countries, reminiscent of scenes from months past.

Clashes erupted in Greece today after some 50,000 anti-government demonstrators marched in central Athens against a new round of cost-cutting measures, the Associated Press reported. Protesters hurled fire bombs and threw paving stones at riot police near the Parliament building. Police fired back with tear gas to disperse the crowds.

After two years of steep spending cuts coupled with tax hikes, tensions remain high across the near-bankrupt country. Greece is in the midst of its fifth year of recession, with nearly one out of every four people out of work.

But the debt-stricken country must make further fiscal reforms to secure any additional rescue loans from its foreign lenders — the International Monetary Fund, the European Central Bank, and the European Commission. A finance ministry official confirmed Greece’s Prime Minister Antonis Samaras and Foreign Minister Yannis Stournaras have hammered out a package of nearly $15 billion dollars in new spending cuts over the next two years, according to AP reports. Most of that savings will come from slashing wages, pensions and welfare benefits.

A similar public backlash has also broken out in Spain. Some 6,000 opposition protesters calling for new elections clashed with riot police Tuesday night near the national Parliament building in central Madrid. Police fired rubber bullets and arrested at least 38 people. 64 others were injured in the violence, including more than two dozen police officers.

The outcry comes as the Spanish government plans to announce a new round of financial reforms to tackle its growing debt crisis. It will do so Thursday when it unveils its budget plan for 2013.

Today, the Bank of Spain warned the country is in the midst of a deep recession. Its latest monthly report stated that available data for the third quarter of the year suggests that GDP kept falling at a significant rate, in a context of high financial tensions. At the same time, Spain’s unemployment rate continues to hover at nearly 25 percent — its highest level since the 1970s.

On Friday, an independent audit of Spanish banks will reveal just how much foreign funding the country will need from the European bailout package it negotiated in June.