KUALA LUMPUR, Malaysia — President Barack Obama is hopscotching through China’s neighborhood with a carefully calibrated message for Beijing, trying both to counter and court. 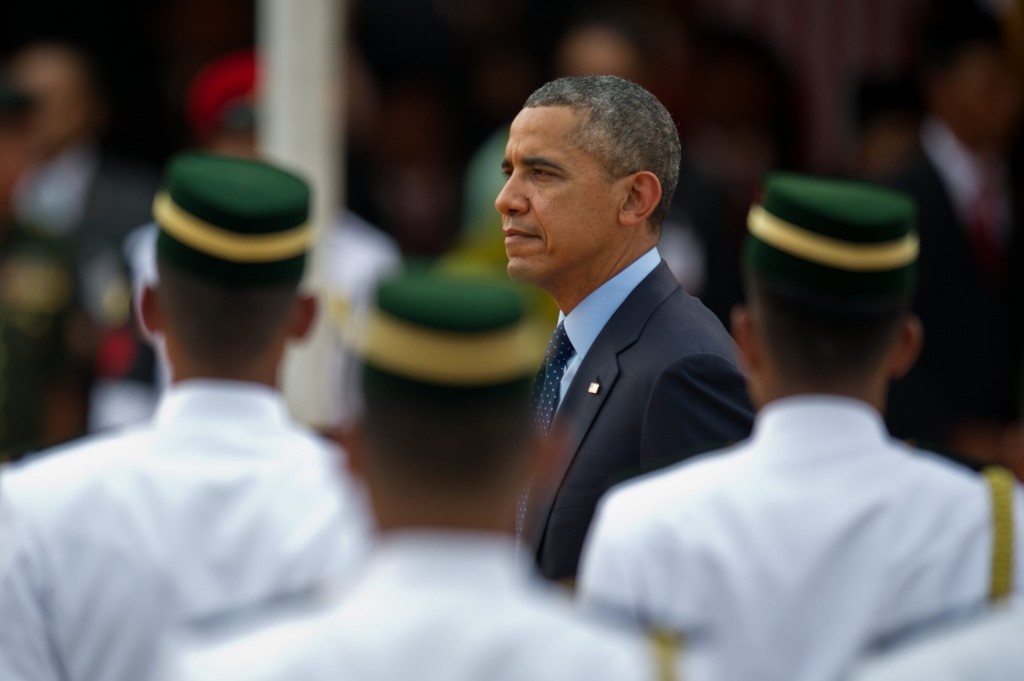 President Barack Obama attends a welcoming ceremony at Parliament in Kuala Lumpur on April 26. During his visit to Asia, Obama has signaled that American military power can blunt Chinese aggression in the region. Credit: Mohd Rasfan/AFP/Getty Images

During visits to U.S. allies, Obama has signaled that American military power can blunt Chinese aggression in the Asia-Pacific region, even as he urges Beijing to use its growing clout to help resolve international disputes with Russia and North Korea.

The dual tracks underscore Beijing’s outsized importance to Obama’s four-country swing through Asia, even though China is absent from his itinerary.

The president opened a long-awaited visit to Malaysia on Saturday, following stops in Japan and South Korea, and ahead of a visit to the Philippines.

Obama’s trip comes at a tense time for the region, where China’s aggressive stance in territorial disputes has its smaller neighbors on edge.

There also are continued questions about the White House’s commitment to a greater U.S. focus on Asia. In an affirmation, Obama is expected to sign a security agreement with the Philippines clearing the way for an increased American troop presence there.

In Tokyo, Obama asserted that a treaty obligating the U.S. to defend Japan would apply if Beijing makes a move on a string of islands in the East China Sea that Japan administers but China also claims.

Yet at times, the president has tempered his tough talk in an attempt to avoid antagonizing Beijing.

To the chagrin of the Japanese, Obama said the U.S. would not pick sides in the sovereignty claims at the heart of the region’s territorial disputes. He repeatedly declared that the U.S. is not asking Asian allies to choose between a relationship with Washington and Beijing.

“I think there’s enormous opportunities for trade, development, working on common issues like climate change with China,” Obama said during a news conference in Tokyo. “But what we’ve also emphasized – and I will continue to emphasize throughout this trip – is that all of us have responsibilities to help maintain basic rules of the road and an international order.”

Cut off from most of the world economy, North Korea is deeply dependent on Chinese trade and assistance, giving Beijing enormous leverage. The U.S. and its allies, including South Korea, have pressed China to wield that influence more aggressively with the North, which is threatening to launch a fourth nuclear test.

Beijing has a permanent seat on the U.N. Security Council and has supported some efforts to penalize North Korea, but has not taken sweeping unilateral actions to choke off the North’s economy.

As with North Korea, the crisis in Ukraine has again put Obama in the position of asking China to prioritize international order over its own close relationship with Moscow.

China and Russia frequently join forces as a counterweight to the West. But in the face of Vladimir Putin’s aggression in Ukraine, the Obama administration has sought to temper Beijing’s support for Putin by appealing to China’s traditional aversion to foreign meddling in domestic affairs.

The White House has little expectation that China will fully abandon the Kremlin and join with Western nations in levying sanctions on Russia. U.S. officials are hoping China will at least avoid making overt gestures of support for Russia’s actions, and were heartened when China abstained in a Security Council vote condemning Moscow.

Analysts say Obama can maintain a China policy that both looks to Beijing for help while also trying to counter its rise, but only if the dividing line between those positions remains clear.

“If you are consistent, they’ll be willing to have you push them occasionally on things that are sensitive or where there are areas of dispute,” Chris Johnson, a China scholar at the Washington-based Center for Strategic and International Studies, said of Beijing’s leaders. “It’s where you’re not consistent and they’re not sure what you’re going to do next that causes them a great amount of consternation.”

China will factor into Obama’s meetings in Southeast Asia, given that Beijing has territorial disputes with both Malaysia and the Philippines. Obama had planned to visit both countries in October, but canceled the trip due to a government shutdown in Washington.

Obama’s visit to Malaysia is the first by an American president since Lyndon B. Johnson traveled here more than four decades ago. Obama was feted by Malaysia’s royal family at a state dinner Saturday night and had meetings planned Sunday with the prime minister and young Southeast Asian leaders.

Absent from Obama’s schedule in Malaysia: a meeting with opposition leader Anwar Ibrahim, who presents the most potent political threat to Prime Minister Najib Razak amid a decline in Najib’s popular support over the past two elections.

The U.S. spurned calls from human rights groups for the president himself to meet with the 66-year-old former deputy prime minister, but was instead sending Susan Rice, Obama’s national security adviser and former U.N. ambassador, to see with him.

Anwar recently was convicted for the second time on sodomy charges that the U.S. and international human rights groups deem politically motivated. Anwar is appealing, and could be forced to give up his seat in parliament and go to prison if he loses.