At least 37 people, including 10 children, died on Saturday as they attempted crossing the Mediterranean Sea from Turkey into Greece, adding to already staggering totals of migrants and refugees who drowned or were killed in recent years, many of whom took the voyage using over-packed rafts to escape Syria’s civil war.

On Saturday, a 56-foot boat slammed into rocks and then capsized soon after leaving Turkey’s shores while trying to cross a five-mile stretch of sea to the Greek island of Lesbos, Turkish state media reported.

Turkish officials said 75 other people have been rescued from the capsized boat and many were being treated for hypothermia and related injuries, though the death toll may rise as rescuers continue searching the now partially submerged ship near the resort town of Ayvacik. 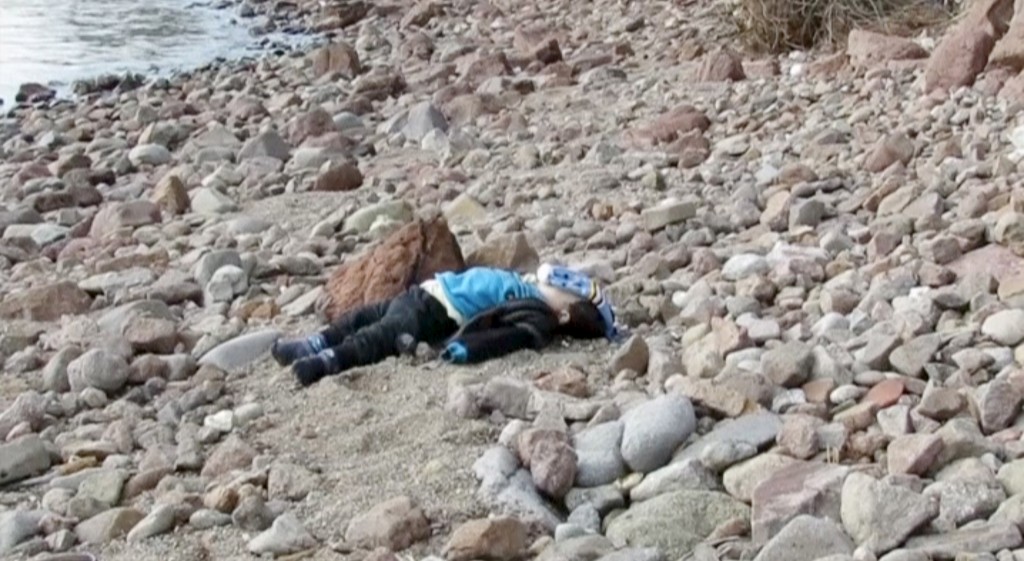 The body of a toddler washed ashore after a migrant boat sank off Turkey’s western coast of Ayvacik is seen in this still image from video taken Jan. 30, 2016. Photo by Reuters TV

One Turkish official told the Associated Press that the boat had “hit rocks soon after it left the coast,” while Turkish media reported that at least 39 had died, including people from Afghanistan, Myanmar and Syria.

“There are either three or four more bodies inside the boat, which had two decks,” said Saim Eskioglu, deputy governor for the coastal Canakkale province, to the AP. “The divers are trying to reach them.”

The International Organization on Migration, based in Geneva, has documented at least 244 migrant deaths alone this month, following the deadliest year on record in 2015 for refugees crossing the Mediterranean, when more than an estimated 3,700 people perished.

“January has been the deadliest month so far for drownings between Turkey and Greece,” Peter Bouckaert,  emergencies director at Human Rights Watch, told The Associated Press. “Almost every day, more drown on this dangerous journey.”

The International Organization for Migration (IOM) said an estimated 55,528 migrants and refugees crossed the Mediterranean through the first 28 days in 2016 in an attempt to reach Europe.

More than 1 million people entered Europe in 2015, mainly through Greece, where 816,000 people crossed the Mediterranean Sea fleeing war and poverty, according to the IOM.

Left: A boat that carried migrants overturned into the sea off Turkey's western coast of Ayvacik,on January 30, 2016. Photo by Reuters TV