At least 74 killed as wildfires sweep through resorts in Greece

RAFINA, Greece — Wildfires raging through seaside resorts near the Greek capital torched homes, cars and forests, killing at least 74 people, authorities said Tuesday. Twenty-six of the dead were groups of families or friends found huddled together, some of them clasp in hugs. Others swam out to sea to escape the inferno and some never came back.

Greece endures wildfires every year but the fires that broke out Monday were the deadliest to hit the country in decades. Fueled by gale-force winds, they trapped thousands of people on beaches, roads and in homes.

Prime Minister Alexis Tsipras declared three days of national mourning for those killed as officials feared the death toll could rise even further, as there was no definitive count of how many people were missing.

Coast guard boats patrolled the shores near fire-hit areas Tuesday after over 700 people trapped by quick-moving fires had to be rescued from beaches or the sea, where six of the dead were found. 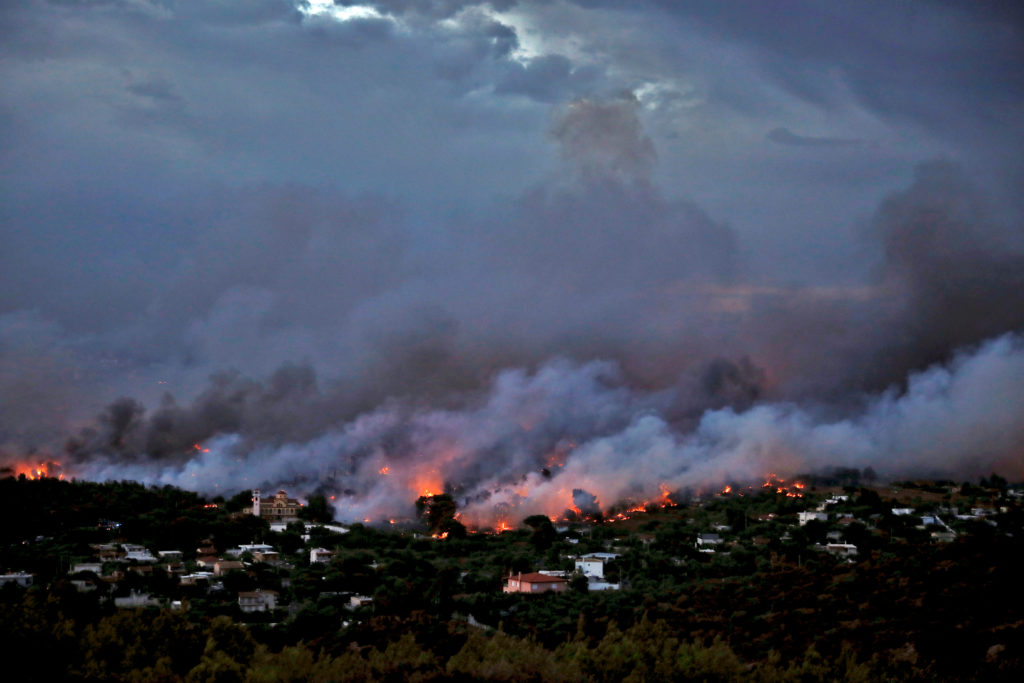 A wildfire rages in the town of Rafina, near Athens, Greece. Photo by Alkis Konstantinidis/Reuters

Twenty-six of the dead were found at first light Tuesday huddled together in one compound near the sea in the community of Mati, near the port of Rafina. Red Cross rescuers who found them said they appeared to be families or groups of friends, as they were found hugging in groups of threes and fours.

Although the fires had largely abated by Tuesday afternoon, they were far from out. Firefighters, aided by water-dropping aircraft from the sky, were tackling the remaining areas in the two main blazes near the capital: one northeast of Athens near Rafina, where most of the casualties appeared to have occurred.

In the other major fire, about 50 kilometers (31 miles) west of Athens, some flare-ups were reported Tuesday afternoon. Fires continued to burn in other parts of the country too, with one on the island of Crete the most severe.

With the flames whipped up by gale-force winds that frequently changed direction, many tourists and residents fled toward the coastline. Some swam out to sea, braving rough water and strong currents to escape the ferocious flames and choking smoke.

The speed of the fire’s advance took many by surprise.

“It happened very fast. The fire was in the distance, then sparks from the fire reached us. Then the fire was all around us,” resident Nikos Stavrinidis, who had gone with his wife to fix up his summer home for a visit by his daughter, told The Associated Press.

Stavrinidis, his wife and four friends swam out into the sea to escape the smoke, but they quickly became disoriented, losing sight of the shore and being swept out further by the wind and currents.

Two of the group didn’t survive.

“It is terrible to see the person next to you drowning and not being able to help him,” Stavrinidis said, his voice breaking. The remaining survivors were picked up by a fishing boat with an Egyptian crew who jumped into the water to rescue them. 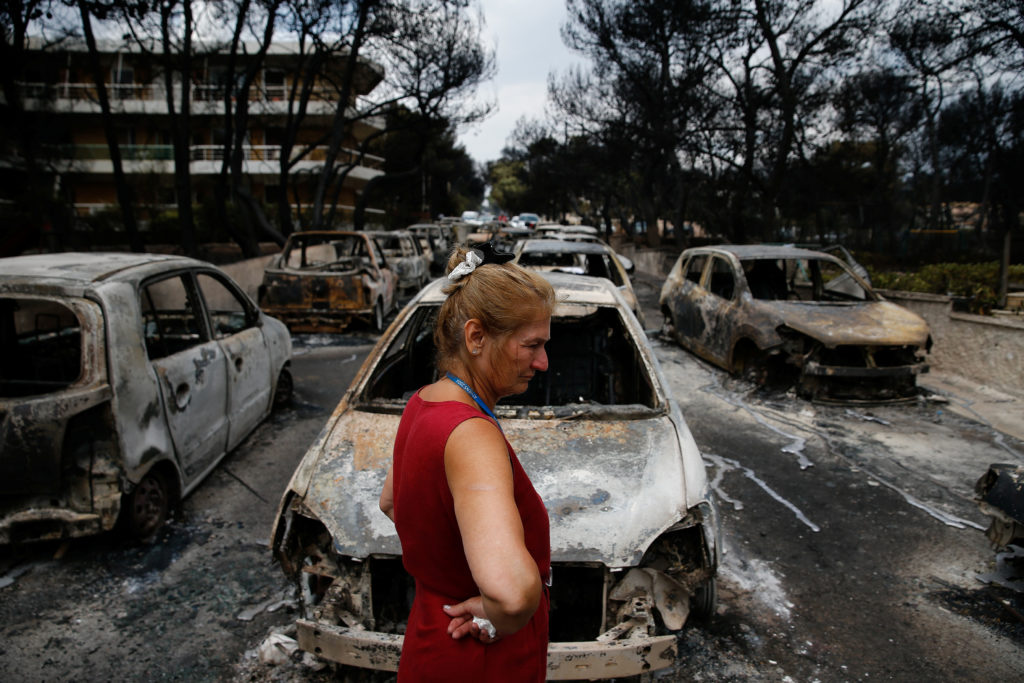 A local stands next to burnt cars following a wildfire at the village of Mati, near Athens, Greece, Photo by Costas Baltas/Reuters 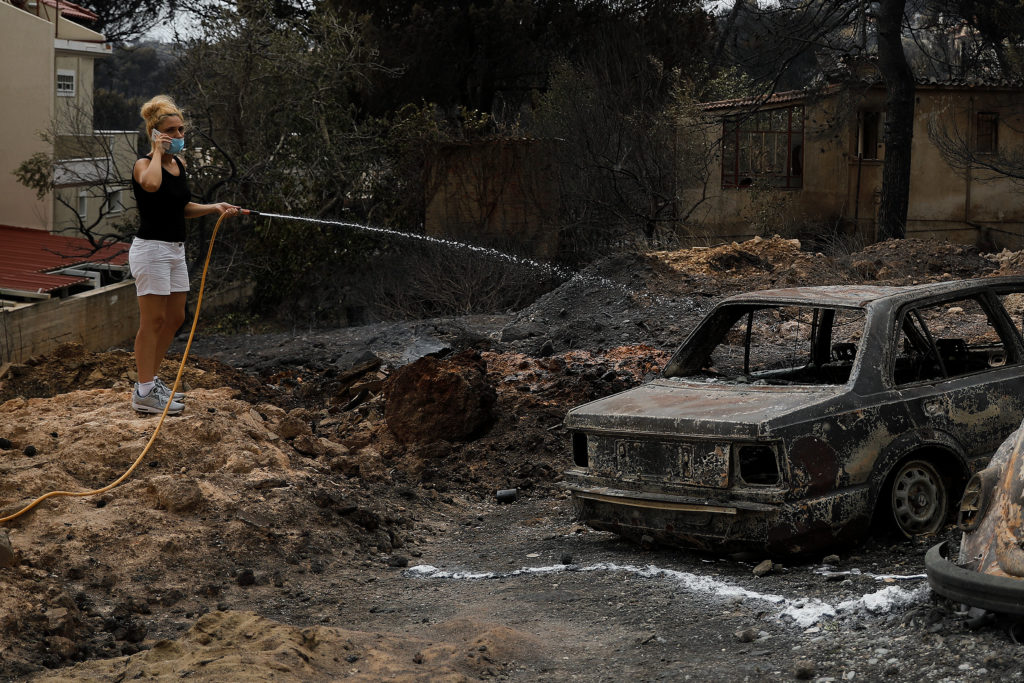 A local sprays water with a hose on a burnt car following a wildfire at the village of Mati, near Athens, Greece. Photo by Alkis Konstantinidis/Reuters

A flotilla of coast guard and private boats evacuated more than 700 people from threatened beaches overnight, authorities said. Defense Minister Panos Kammenos said 88 people had been picked up from the sea by a military vessel.

“Everything happened in seconds,” said Andreaas Passios, who lives next to the compound in Mati where the 26 bodies were found. “I grabbed a beach towel. It saved my life. I soaked it, grabbed my wife and we ran to the sea.”

Passios said he and his wife stayed by the sea for two hours.

“It was unbelievable. Gas canisters were exploding. Burning pine cones were flying everywhere,” he said.

When the flames died down, Spyros Hadjiandreou came searching for loved ones.

Fanned by gale-force winds, the flames spread rapidly into seaside towns, moving too fast for many who were in their cars or homes to flee, Malliri said.

“The police tried to direct us away from the fire, but we couldn’t escape it,” said Aleka Papariga, a former Greek Communist Party leader who lives near Rafina. “We got stuck in traffic and the flames were on top of us. We managed to find a small gap and we made it out.”

Evangelos Bournous, the mayor of Rafina, blamed the winds.

“We were unlucky,” he said. “The wind changed and it came at us with such force that it razed the coastal area in minutes.” 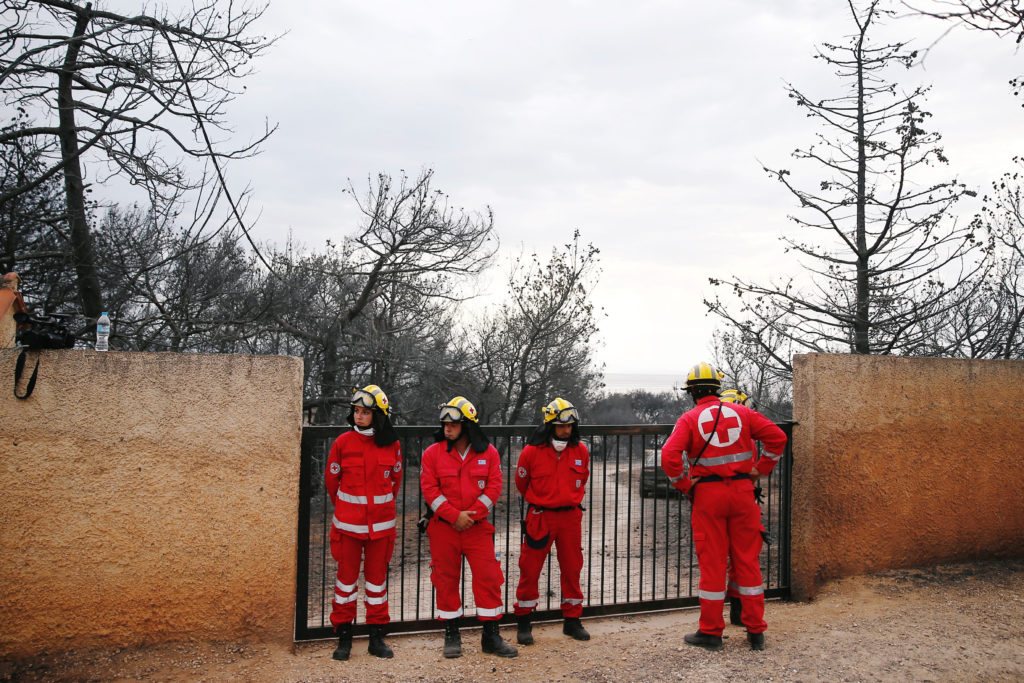 Rescue team members stand next to the area where bodies were found following a wildfire at the village of Mati, near Athens, Greece. Photo by Costas Baltas/Reuters

Rafina’s dock became a makeshift hospital during the night as paramedics checked survivors, some clad in only their bathing suits, who emerged from coast guard vessels and private boats.

In all, 47 brush and forest fires broke out across Greece on Monday and early Tuesday, with most of them quickly extinguished, the fire department said.

Heavy rain was forecast across southern Greece on Wednesday, with hopes they could help in the firefighting effort.

Forest fires are common in Greece during its hot, dry summers, and temperatures recently reached up to 40 degrees Celsius (104 Fahrenheit).

In 2007, more than 60 people were killed when huge fires swept across the southern Peloponnese region.

Left: A man looks at the flames as a wildfire burns in the town of Rafina, near Athens, Greece. Photo by Costas Baltas/Reuters