MINSK, Belarus — Authorities in Belarus on Wednesday resumed detentions of protesters who keep taking to the streets to demand the resignation of authoritarian President Alexander Lukashenko, as opposition leaders ratchet up pressure on the government by forming a coordination council to push for for a new election.

Several dozen people were detained in front of the Minsk Tractor Factory, where workers have been on strike since Monday, Sergei Dylevsky, leader of the factory’s strike committee, told The Associated Press. The country’s Interior Ministry said in a statement that police detained only two protesters and pushed the remaining crowd aside.

The new detentions come after days of peaceful protests, which police didn’t interfere with. They also came hours before the first meeting of the opposition’s coordination council, which was formed to facilitate peaceful transition of power and denounced by Lukashenko as “an attempt to seize power” in the country.

Lukashenko, who last week won his six term in office with 80% of votes in an election widely seen as rigged, blasted the opposition again on Wednesday for creating “alternative (government) bodies” and warned them they may be prosecuted for it.

“If someone thinks that the government bent down and teetered, you’re mistaken,” Lukashenko said at a meeting with security officials. “We will not waver.”

“I call on you not to recognize these fraudulent elections. Mr. Lukashenko has lost all the legitimacy in the eyes of our nation and the world,” Tsikhanouskaya said in a video statement. A former English teacher who united fractured opposition groups and drew tens of thousands to rally in her support, the 37-year-old Tsikhanouskaya got only 10% of votes in the election, according to official results.

She dismissed the results as falsified and demanded a recount, but then suddenly left the country for Lithuania in a move her campaign said was made under duress. 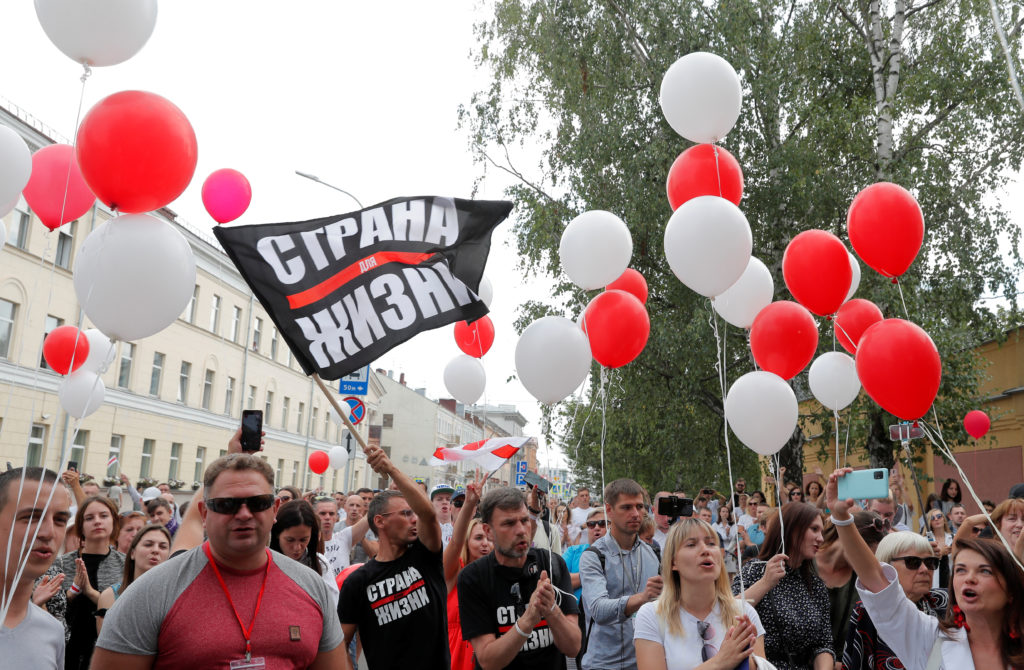 People gather outside a detention centre to support the husband of Belarusian opposition politician Sviatlana Tsikhanouskaya, Syarhei Tsikhanouski who is in jail on suspicion of inciting riots, on Tsikhanouski’s birthday in Minsk, Belarus, on Aug. 18, 2020. A sign on the flag reads: “Country for life.” Photo by Vasily Fedosenko/Reuters

On Monday, Tsikhanouskaya said she was ready to act as a national leader to facilitate a rerun of the election, and her associates announced the formation of a “coordination council” to help create a platform for a peaceful transition of power.

“I have initiated the national coordination council of Belarus. It will lead the process of a peaceful transition of power via dialogue. It will immediately call for new fair and democratic presidential elections with international supervision,” Tsikhanouskaya said in the latest video statement.

Lukashenko repeatedly rejected demands to step down and bristled at the idea of talks with the opposition, denouncing the coordination council on Tuesday as a “an attempt to seize power” in the country. Nevertheless, the council is set to convene for the first time Wednesday.

Hundreds of thousands of people have protested in Belarus since Aug. 9. The rallies have continued for 10 straight days despite a brutal response from the police, who in the first four days of demonstrations detained almost 7,000 people and injured hundreds with rubber bullets, stun grenades and clubs. At least three protesters died.

This week, workers at several major industrial plants, including a huge factory that accounts for a fifth of the world’s potash fertilizer output, have started a strike demanding the embattled president resign. On Wednesday morning, rallies resumed in Minsk.

Police blocked all entrances to the Janka Kupala National Theater in Minsk, where the troupe on Tuesday gave notice en masse after its director, Pavel Latushko, was fired for siding with protesters. Actors who arrived at the theater on Wednesday morning weren’t allowed in.

“It’s unprecedented that in the 21st century law enforcement is deployed to a cultural institution. The situation speaks for itself,” Latushko said.

Western officials refused to recognize the election as free or fair and criticized the violent crackdown. The EU is preparing a list of Belarusian officials who could be blacklisted from Europe over their roles.

In a letter inviting leaders of the bloc to the teleconference taking place on Wednesday, European Council President Charles Michel said that “what we have witnessed in Belarus is not acceptable.” He said the “violence against peaceful protesters was shocking and has to be condemned. Those responsible must be held to account.”

Daria Litvinova in Moscow contributed to this report.

Left: People gather outside a detention centre to support the husband of Belarusian opposition politician Sviatlana Tsikhanouskaya, Syarhei Tsikhanouski who is in jail on suspicion of inciting riots, on Tsikhanouski's birthday in Minsk, Belarus. Photo by Vasily Fedosenko/Reuters

In Belarus, ‘extraordinary’ wave of protests could threaten Lukashenko’s reign